New York's little guys did a pretty sharp job on Pierce in the 87-71 victory.

Good day! Please welcome the talented, disease-free Dylan Murphy to P&T. You probably know his fine Xs and Os work from HoopChalk, and he'll be contributing that kind of analysis here at P&T throughout the playoffs, and perhaps beyond. It'll be called "KnicksTape" for now, but we're open to cooler names. Enjoy, and remember to bark/quack/make penguin sounds aloud every time you read Raymond Felton's name. -Seth

So, Knicks! Things are looking pretty good, what with Boston's rather inept offense and all. A part of that is an aging core and an injury-depleted roster; but another part is the Celtics' offensive schematics. Namely, Boston's insistence on isolating Paul Pierce against Knick point guards - Raymond Felton in particular - at the top of the key. We saw it 19(!) times in Game 2 (not to mention his isos against Iman Shumpert, J.R. Smith and Carmelo Anthony), in which the play's design led to this type of isolation. With the Knicks, we've seen this far too often: Carmelo Anthony catching the ball on the baseline, and Boston's weak side help cutting off driving lanes and passing angles and the type of ball movement that pretties up the offense. But Doc Rivers saw a mismatch and hoped to squeeze every offensive advantage out of it that he could. Too bad Raymond Felton is a bulldog.

No, seriously. Raymond Felton played Paul Pierce perfectly. Sure, he scored a few times and did a couple of things here and there, but Paul Pierce will do Paul Pierce on occasion. What's important is that New York completely flipped the script on Boston by daring Pierce to isolate - just as Boston does to Melo - and rarely double-teaming (only three times). Here's how all 19 possessions broke down:

(Note: "Non-PP FGs" refers to the result of a possession in which Pierce isolated and a shot ended up being taken by someone other than him. Basically it tallies the success of the offensive possession for the team - whether it lead to a basket or not.)

36.8% on "mismatch" isolations isn't so hot. And even if we look at that Pierce-Felton 3 for 5 as a success, think of it this way: on the 12 total plays in which these two specific players were isolated, Felton only allowed five Pierce field goal attempts. His defense was solid enough on the other seven plays to force secondary offense, which the rest of the defense shut down pretty handily.

So, why did it work? Well, it wasn't only Felton and Kidd's stellar defense. The pure isolation subsequently stagnated the rest of Boston's off-ball players, therefore allowing the rest of the Knicks defense to shrink any and all playmaking options.

Take this play from the first quarter, when Boston wastes more than half the shot clock just trying to get Pierce all warm and cozy in his isolation blanket - all while the rest of his teammates are camped out or clearing out or just kind of staring. 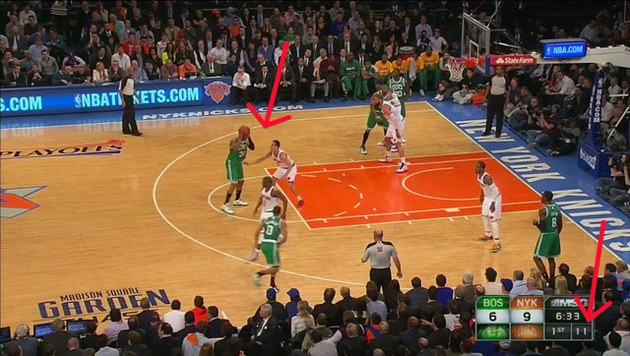 When he inevitably backed down Pablo Prigioni into the paint, in came Chandler to chew him up and spit him out. What's more, though, is the secondary (though, admittedly, probably unintentional) beauty of the whole thing: because Pierce is backing down Prigioni, twisting and turning and leaning and squirming his way into the paint, he becomes less court aware. With his head buried, Chandler just lies in wait to pounce with the double team and contest/block whatever Pierce throws up towards the hoop. 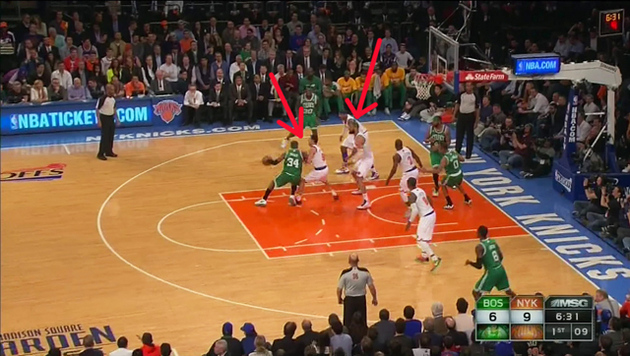 So what does Pierce do? He stumbles and bumbles and looks up to find CHANDLER IN HIS FACE. Then he takes a terrible fadeaway and travels:

Even when he stayed on the perimeter and opted for his famed step-back elbow jumper, he was still met with same option-less abyss: 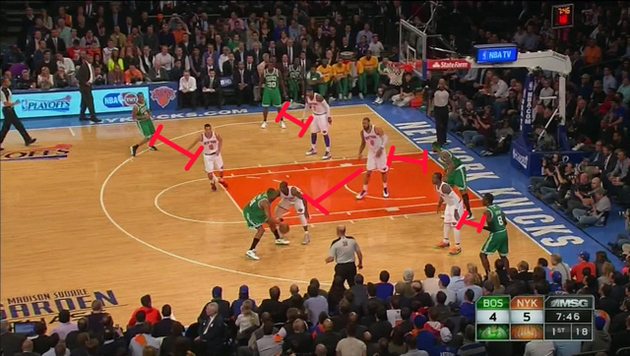 Chris Wilcox is moving to the other side of the court, effectively leaving Chandler to double if necessary. And with Chandler in position, J.R. Smith has no reason to leave Jeff Green in the corner - meaning, the strong side of the court is completely cut off. On the weak side, Prigioni cheats a bit off Avery Bradley, but not enough to impede any need for recovery. Meanwhile, Melo can slightly sag off Brandon Bass to provide further help in the paint.

With no other movement going on, Pierce must either reset or go one-on-one. He chooses the latter, and ends up hoisting a well-contested fadeaway.

Or take this play, when Pierce tries to post Felton closer to the hoop. By the time he makes his move to the basket, Chandler has abandoned Garnett and forced Pierce into turning over the ball. And even if Pierce wanted to kick the ball back out, Iman Shumpert has already rotated over; there's nowhere to go but forward and into Chandler's less than welcoming arms:

Even when the Knicks went away from their two-point guard sets, they continued their switch-happy ways and welcomed a Prigioni or Kidd or Felton on Pierce. (You might have noticed this happen in a previous example.) So when Boston ran multiple pick and rolls to force the matchup they wanted, the Knicks were more than happy to comply. Here we can see Jason Terry and Paul Pierce use the P&R to shift J.R. Smith away from Pierce, like so: 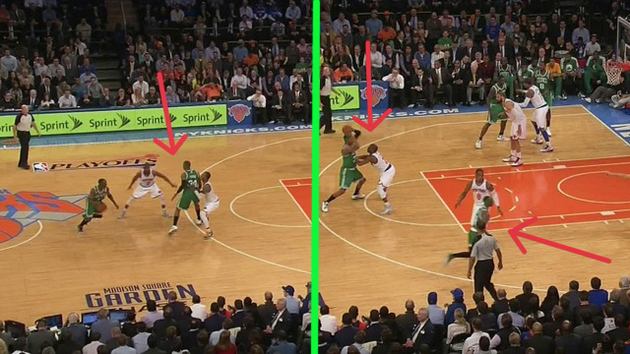 Again: heading into Game 2, Boston probably salivated at this opportunity. But what they didn't foresee was the Knicks' disciplined commitment to leaving Pierce alone, which neutralized his playmaking ability and forced him to score Boston's way through the game. This did not happen; Paul Pierce, at this stage of his career, isn't that deadly in multiple isolations. And so the Celtics were left with a rather inefficient gameplan that slowly knocked the entire team out of its offensive rhythm.

Anyway, back to this play: Paul Pierce does end up scoring. This is bound to happen, given that he's Paul Pierce. But when he did nail this elbow jumper (among others), Felton was all over him and contesting the shot heavily. 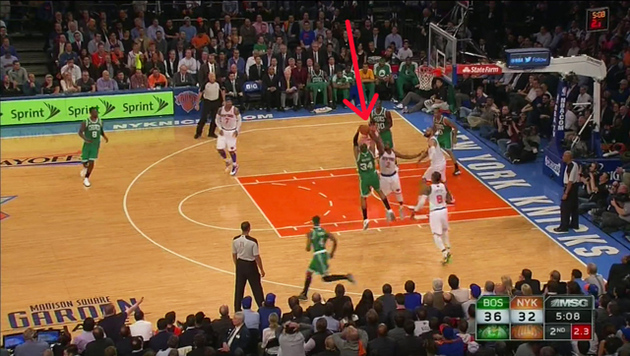 But, wait! Pierce kills everyone from the elbow and the mid-range as a whole, you might say. Yes, yes, we all share those late-game nightmares. But over the course of an entire game, not so much: on the season, he only shot 41.4% from 15-19 feet, according to NBA.com. If Boston wants to rely on these isolation step-backs, fine by me. Here's that entire play in full:

So what of all this, anyway? Pretty much just a golf clap for Mike Woodson, because he chose to stick with the Knicks' successful two-PG lineup while refusing to double team Pierce. It happens too frequently in the NBA, this whole double teaming "mismatches" thing. Often times the iso-heavy look can detract from a team's overall offensive capabilities, limiting secondary offensive action and keeping guys uninvolved. Not to mention that NBA players who are isolated in "mismatches" feel the need to take advantage, even when it's to the detriment of the team as a whole.

But, anyway: Rivers moved away from these Pierce-focused sets in the second half, probably because they weren't working. In Game 3, expect to see more of the same except in different spots on the floor. In a few moments of the game which we won't get into here, Pierce did have success deep in the post. And that's where he can really capitalize on any size advantage. But if Boston wants to give it one more go 'round on the perimeter, have at it. We're looking forward to it.