Some leftover notes, .gifs, and links from Game 3.

Share All sharing options for: J.R.'s Elbow and other Knicks-Celtics Game 3 Leftovers

Hello, I hope you're having a pleasant Saturday. The Knicks moved within a game of winning their first playoff series since 84 AD last night, pulverizing the Celtics on their homecourt. Some things that didn't make it into the recap:

- Since it's gonna be the main point of uncertainty between now and Sunday afternoon, here's the elbow J.R. Smith delivered to Jason Terry's puss in the fourth quarter:

J.R. did make contact, and he obviously did so on purpose. It looks like Terry embellished that contact a bit, but it was still a dick move by J.R. The one level of dickishness I don't agree with is Doc Rivers's suggestion that the score of the game mattered. If the Celtics had clearly given up down big, then, yeah, this would have been especially shitty of J.R. But there's Terry guarding him very tightly and slapping at the ball and/or J.R.'s arm pretty hard. Physical play begets physical play. Or, as the saying goes, if you don't want your face elbowed, don't put your face near someone's elbow. I don't know if this warrants a suspension, but if it's just one game, it doesn't really matter.

- Before J.R. got ejected for the elbow, he did some top-notch and totally clean late-game trolling:

- Jared Dubin wrote a great thing this morning about Raymond Felton's varied pick-and-roll attacks in this series. It's been fun to watch him (with the help of his screener) find ways to dismantle every defensive look Boston sends at him. We've seen Ray cross up bigs when they switch, hit cutters when they trap, and just beat folks on the move, keeping them on their heels by alternately veering around the pick and jinking straight away from it. On this crazy, parabolic pass Felton threw to J.R., Tyson Chandler set a great screen that could have conceivably sent Ray in either direction. That and Ray's tiny hesitation dribble up top put Brandon Bass off-balance so every Celtic had to rotate.

- The one thing that got Ray in trouble a few times (and Jared mentions this) was fishing for alley-oops when Chandler rolled to the rim. All series, Chandler's been hanging back after setting screens, giving Felton ample room to operate. When Chandler does roll, the Celtics almost always double down to cover him, and Ray's lobbed in a few hospital passes that either got picked off or created a frightening aerial collision.

- By the way, Clyde on Felton: "Feline quickness, canine determination".

- As has been the case, the Knicks created a lot of their open looks off dribble penetration, and a bunch more off Carmelo Anthony swinging quickly out of post double-teams:

That looks very similar to the hanging lay-in Smith had in the previous game. Since J.R.'s not a terrific ball-handler, his drives are deadliest when the defense is stirred by great ball movement.

- Regarding dribble penetration: Iman Shumpert got an assist or two by driving and kicking, but that hasn't been the best look for him. He's just seemed unable to create any separation off the bounce, and when he does get a step, he's often built up so much momentum that he can't finish. I'm pickin' nits, though. Shump didn't do much offensively last night, but he consistently exploited Paul Pierce's eerie nonchalance at the other end. It's been a while since we saw the Shumpert-toothed tiger on the prowl like that.

(That's also got the replay of Melo's absolute undressing of Brandon Bass off the dribble.)

- And like I said last night, snaps for the little guys on defense. Felton, Jason Kidd, and Pablo Prigioni did such a wonderful job of herding bigger players like Paul Pierce and Jeff Green toward the perimeter when they were trying to get free. And even once the ball arrived, the littles made an impact. Pablo had five steals (several on jumped passing lanes, not strips) and Kidd and Felton combined for three(!) blocks, including Kidd's masterfully timed swipe of Green's buzzer-beater

- The Knicks didn't use Melo as as a screener a lot in this game (at least not to my eye, without having hit Synergy yet), but they did do it. I like it when they do that. 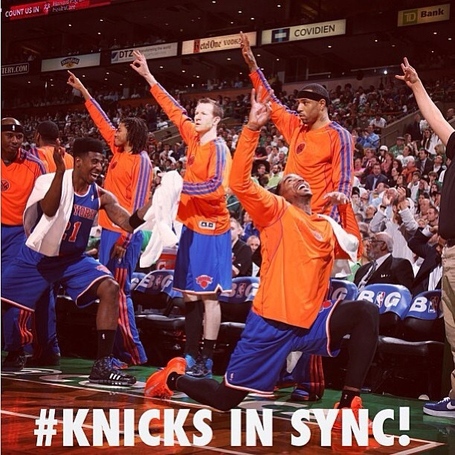 The group three-finger heil looks a little weird, but J.R. and Shump lighten things up.

- Just gonna say that I saw Steve Novak not only drill a couple big threes to keep the Knicks far ahead in the fourth, but rotate perfectly to contest a Kevin Garnett layup as well. That was weird.

- In closing, Paul Flannery's got all the quotes and Boston perspective from after last night's game. This series is a big step for the Knicks, and it feels like a significant tumble for the Celtics empire.