KnicksTape: So, Like, Why Is Kenyon Martin So Good?

It's the little things.

I know, right? Some of Kenyon Martin's contributions are easy to see: the rim protection, the pick-and-rolls, the offensive rebound putback dunks with gratuitous backboard slapping, all of that. His statistical contributions, the measurables, have been flashy, and have been part of the reason why he has become something of a media sweetheart. But there's something deeper in Kenyon Martin's play that's energizing the Knicks: his general basketball wherewithal. It's just been really good and nice and helpful for everyone.

It's always bugged me a bit that there's no measurement for these kinds of things. Sure, we can see that the Knicks' defensive rating jumps from 103.5 to 101.4 when Martin is on the floor, but tracking his play is more than that. He's neutralizing plays before they even start, often times forcing Boston to reset its offense and heave some end of shot clock nonsense. So while he might not gain anything in terms of personal statistics, it's these types of plays that prime the Knicks defense for stops and offense for buckets. Here's a sampling of some of that from Game 3.

Kenyon Martin is only a part of the Knicks offense as a screener/roller. Otherwise he's an offensive rebounder and a get-out-of-the-way kind of guy. But that second part, he's actually quite good at it. Take this play, which starts with a Pablo Prigioni-Kenyon Martin pick and roll. Martin sets the screen at the top of the key and darts towards the rim: 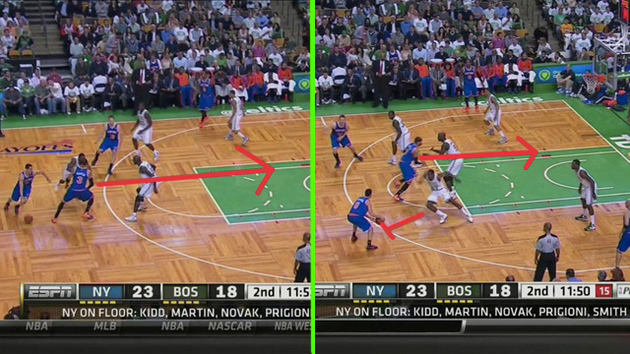 But as the photo on the right shows, the pick and roll is ineffective: Prigioni doesn't turn the corner, and Kevin Garnett is able to shut off a pass to the rolling Martin. Play over, it would seem. Except, not exactly. Martin continues towards the hoop anyway, taking Garnett with him. Meanwhile, the ball swings to J.R. Smith for a pick-and-roll with Steve Novak on the other side of the court.

So why does this matter? Because Martin finished his roll all the way to the rim, he has dragged Kevin Garnett away from any type of help position on this secondary Knicks action. Smith and Novak, therefore are left alone to run a two-man game. 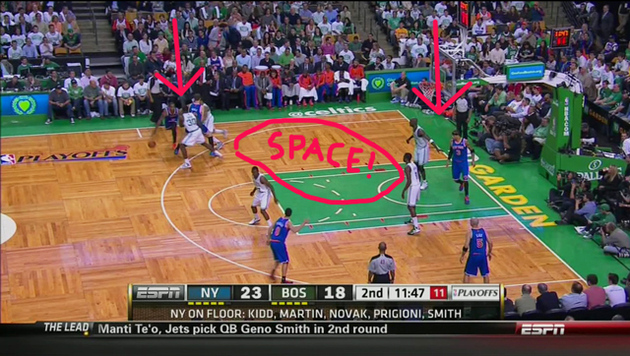 But wait! it gets better.

A lot of times, offensive big men will just loiter around the rim as a play unfolds in an effort not to get in the way. But this mostly just allows a defensive player to play help defense and guard his man, because he can just stand in between the ball and the big. But see how Martin has now crept towards the free throw line? By doing this, he has created a passing lane that forces Garnett to choose: Novak, who has pump-faked his way by his defender, or Martin. 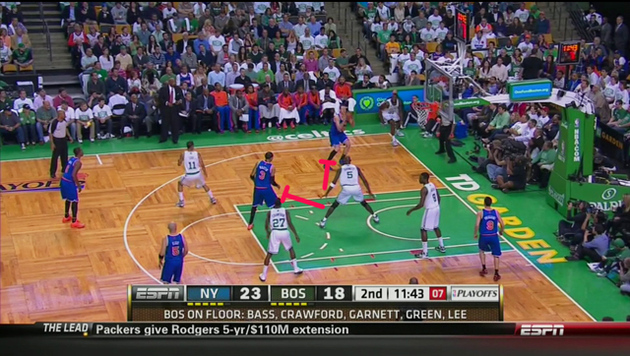 When you watch the whole thing below, notice how Garnett wavers and leans at that point in the play. Ultimately he decides that Novak is too far away and stays put for the rebound. It's Novak, though, and so there isn't one.

All of this allows me to now present you with a weird and fun stat: In Game 3, Kenyon Martin finished his roll all the way to the basket on pick and rolls 75% of the time (9-12). Wooo!

1. Okay, next Martin-inspired cool thing: his battles with Kevin Garnett. Garnett, clearly, is the bigger human being. Not just with his three-inch height advantage, but his wing span does a lot of spanning. Those arms are really, really long and tough to handle - which is to say that, Martin has pretty much lost the one-on-one battle should Garnett catch the ball in deep post position.

So what does he do? He doesn't let Garnett catch the ball. Too often NBA post defenders just let the offensive player run to the block, turn around, and catch the ball. Kenyon Martin allows no such thing.

Take the possession below, when Garnett battles Martin for 9 seconds before he can even touch the ball. (Note: Martin had just fouled Garnett twice battling for post position, so it does, on occasion, come at a cost. But he doesn't play that many minutes and therefore has fouls to use - which, as we know, he often does.) And when he finally does catch the ball, there are five seconds left on the shot clock. 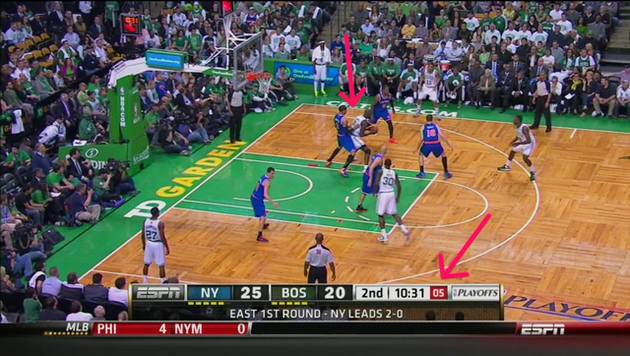 The time constraints force Garnett to operate quickly, which in turn allows Martin to read his fadeaway and completely block his line of sight. There's no way Kevin Garnett can even see the basket on his release. 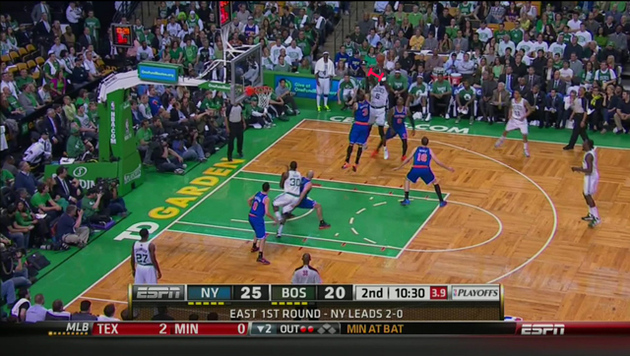 When you watch the video, keep your eyes peeled both on the Martin-Garnett positioning clash and the Boston ball handlers: all they do is swing the ball around the perimeter, trying, and mostly failing, to enter the ball into the post. Also: props to Kenyon on the swim move.

2. Next! This one is kind of a super tiny thing, but this is a Kenyon Martin celebration, after all. So we're going to celebrate. Party hats and pizza and hands up on defense and all. No, actually the hands up on defense part. With Jason Kidd guarding Paul Pierce, Pierce decides to take him down into the post (Why Boston hasn't tried this more is beyond me). As Kidd and Pierce squirm and slip around each other, there's a brief second when Pierce has Kidd completely sealed off in the middle of the paint. Just stick that entry pass right in his bread basket and a layup or shooting foul should follow. 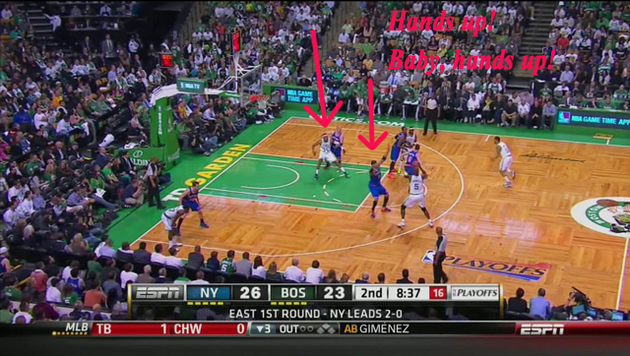 Except, welp: no entry pass. Kidd recovers, Prigioni doubles, the play moves on. What happened? Why didn't Garnett just throw it in there as Pierce cut across the paint? Probably because Kenyon Martin, pesky and pestering pesterer that he is, is jumping up and down like a crazy person trying to prevent whatever the hell it is Kevin Garnett is looking at. And he does.

Yeah, yeah, the pass probably wasn't there anyway. But even so: there's really no reason for Kenyon Martin to be doing what he's doing. Garnett is not a threat when he's stationary at the three-point line. But Martin senses something might be brewing in the paint, and he does his best to interrupt things.

(In fairness, Martin kinda sorta completely messed up at the end of the play there, what with his decision not to challenge Paul Pierce's three-point attempt. Good thing he missed.)

3. And, finally, here's Kenyon Martin forcing a backcourt violation without guarding anyone who touches the ball, or even going near it.

Here's what happened: Jeff Green isolates against Jason Kidd, and Pablo Prigioni immediately doubles. Kenyon Martin is on the other side of the court following Garnett as he clears out. Terrence Williams, who was Prigioni's man but now falls to J.R. Smith, cuts towards the hoop. J.R. Smith's brain farts and he doesn't move (Prigioni even pointed to his man to indicate J.R. should probably, uh, guard him), leaving Williams momentarily wide open. But then comes Kenyon Martin to the rescue. He immediately changes course, abandons Garnett and cuts off Williams and a potential pass.

Alright, that was a lot of words jumbled together. Here it is in photos: 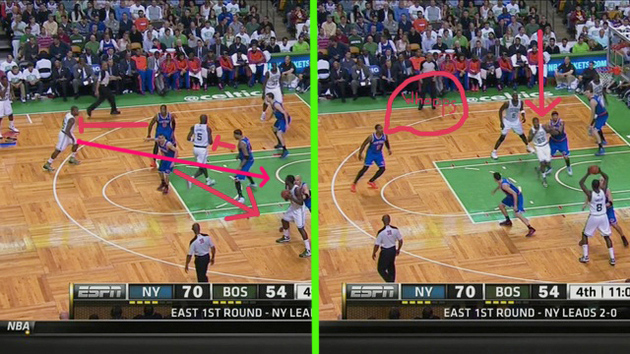 So: the Prigioni-Kidd double team is in full force by now. J.R. Smith is guarding Jordan Crawford at the top of the key, and Kenyon Martin is playing center field. 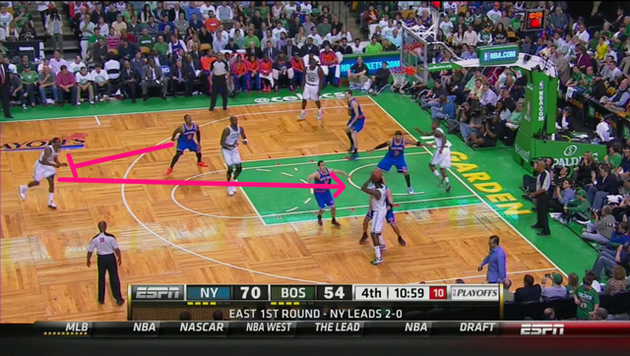 And then Jordan Crawford cuts; J.R.'s brain farts again; Kenyon Martin swoops in to pick up another cutter. 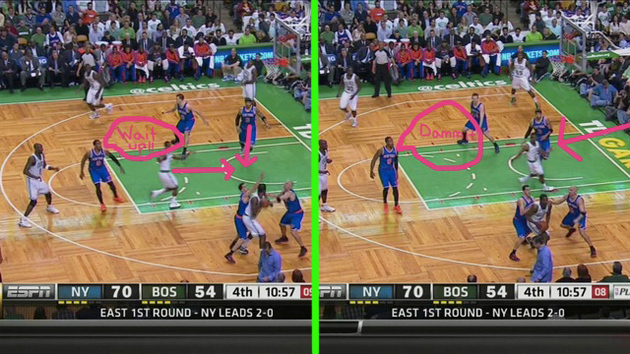 Green's only option is to throw the ball back out towards Garnett - inaccurately - and the Knicks (read: Martin) force a backcourt violation.

Here it is in real time:

So that's why Kenyon Martin is super duper cool and valuable. He's doing little things like this all the time. The non-box score things. The intangibles, if you will. Fine, you won't. Because really, they're tangible. But he's only getting credit for half the things he does on the court in any given game. Here's to changing that.