With J.R. Out, Let's Celebrate the Other Guards in Game 4

A tribute to every Knick guard who didn't win an award this season.

Share All sharing options for: With J.R. Out, Let's Celebrate the Other Guards in Game 4

Alright, I've taken some time, done some meditating, lit some incense at the Yonghegong Lama Temple, and I'm ready to accept J.R. Smith's suspension - no more fits of rage or wild conspiracy theories (Does Stu Jackson hate the Knicks? Was there a second flopper? What should we make of this shady character in the background?*)

As the Knicks prepare for an Earl-less Game 4, the question now becomes: how will the Knicks survive without their fourth-most-valuable guard of the series thus far?

Oh yeah, I just went there. I love Earl, and I don't think he's playing poorly (if perhaps a bit below his usually-high standards), but the other guards on this team have been out-playing him. The numbers don't lie:

J.R. has been the Knicks' second-leading scorer thus far, but the Knicks aren't winning this series with scoring. They're winning because:

And when it comes to #3, the majority of the credit must go to Kenyon Martin and the other guys on this list (The top four playoff D-Ratings on the team belong to Martin, Pablo Prigioni, Jason Kidd and Iman Shumpert). Instead of crying for Earl, let's take some time to celebrate the performances of the often-overlooked backcourt Knicks who have turned this once-terrifying match-up into a rout. Warning: you won't see a lot of points here, but you will see a lot of all the other stats that help basketball teams win basketball games.

What more is there to say about this dude - he has been simply unstoppable. Felton is pretty much running neck-and-neck with Carmelo Anthony for the non-existent "First Round MVP." Mike Woodson gave him the toughest defensive assignment, guarding Paul Pierce. Not only did Ray do a stand-up job in that regard, but he has been point-guarding at an all-world level. The Celtics simply do not have an answer for him on defense.

Ray has come a long way since his regular-season nadir, when he struggled against an avalanche of boos more intense than any NBA player has endured this season on his return to Portland. The folks at the Blazers edge were quite fond of displaying this photo: 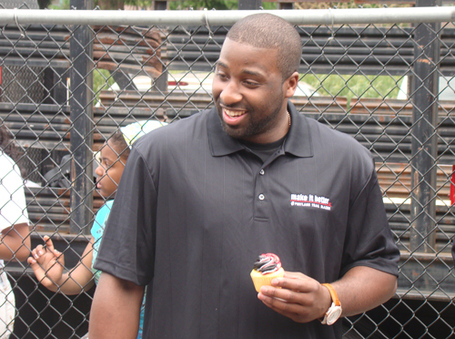 Let me tell you something right now, Ray - if you keep this up throughout the playoffs, you'll never have to pay for another cupcake in any posh cupcake joint in the Tri-State Area.

Nobody calls me an enigma. Maddeningly consistent.

When I wake up in the moorrrrning,

All I do is say damn, Jason, you is doing everything but scoring.

Kidd was absolutely crucial to the Knicks' Game 1 win - the only game of the series the Celtics actually had a chance to steal. Instead, it was Kidd who did the majority of the stealing down the stretch. His fourth-quarter swipe party really set the tone for the rest of the series. Also, he's tied with Martin and Tyson Chandler for the team lead with 15 defensive rebounds. Did I mention this guy is a 40-year-old former-point guard?

I don't imagine Celtic fans felt much in the way of fear when they heard Pablo would be healthy enough to play in Game 2. Maybe some of them even treated the news with sarcasm: Uh-oh, Pirigioni's back. We're in trouble now!

Well guess what, punks, you are in trouble! The 35-year-old point guard, most adorable foreigner to hit New York since Fievel Mousekewitz, has decimated the Celtics' stable of shaky ball-handlers to the tune of an absurd 7.1% steal percentage - meaning the Celtics might as well save the trouble and just hand Pablo the ball once every 14 possessions. And why hasn't anyone shown me a .gif of Pablo hugging the cameraman's shoe in Game 3!?!

The worst performer on this list, but the perhaps the most heartwarming story (okay, second-most...nobody is most heartwarming than Pablo). Shump struggled in Game 1 - and i doubt anyone would blame the kid for having a healthy fear of playoff Game 1s - but has really come on in the past two games on the defensive end. Check out Shump's line for Game 3 - the dude basically went the Full Kidd, in terms of not scoring but doing everything else well. Continuing the "Knick guards be reboundin'" theme, Shump leads the team in defensive rebounding percentage.

I don't believe this game is a shoe-in for the Knicks. Even among all the ass-whuppin' and glass-punchin' of last season's Knicks-Heat series, the Knicks managed to gather enough pride to take Game 4 at home. If something of that nature happens today, I doubt J.R.'s presence would turn the tide.