KnicksTape: Why Did Boston's Offense Come Alive In Game 4?

And what can the Knicks do to prevent that in Game 5?

Share All sharing options for: KnicksTape: Why Did Boston's Offense Come Alive In Game 4?

Those Carmelo Anthony isolations, man. Don't get me started. No, seriously, don't. Let's just not go there. Let's focus on the Celtics today, and why their offense woke up all of a sudden in Game 4. Now, this is all relative: Boston needed an overtime to score 97 points. But it was still, by far, their most efficient showing of the series. So what happened?

If you've watched this series on ESPN, you've probably heard Doc Rivers yell "trust the offense" and "quicken the pace" at his troops in various "Wired" segments. In the first two games, that offense was force feeding the ball to Paul Pierce at the high post against New York's smaller guards. Except the stagnation allowed New York's bigs to swallow up Pierce's penetration and force him into, at worst, contested long twos. By Game 4, Rivers adjusted the gameplan to include more side pick-and-rolls and semi-transition opportunities.

Shifting the pick-and-rolls to the foul line extended wasn't the only change; Rivers got his best wing players (Paul Pierce and Jeff Green) more on the move in these actions. Couple that with Kevin Garnett's extremely effective (read: illegal) screens, and the Celtics were able to generate secondary ball movement and penetration, which eventually led to buckets.

And that's what it was, really: execution. Take the very first play of the game, when Garnett set a screen for Jeff Green in a side pick and roll. Do you see how Jeff Green is already moving to use the screen before Garnett is even set? This is an extremely subtle yet effective trick in the NBA. Iman Shumpert isn't able to swivel his head around until he's barreling into Garnett. Meanwhile, KG uses a double (fore)arm bar to knock Shumpert off his spot, while also kicking his right leg out to make himself as wide as possible. 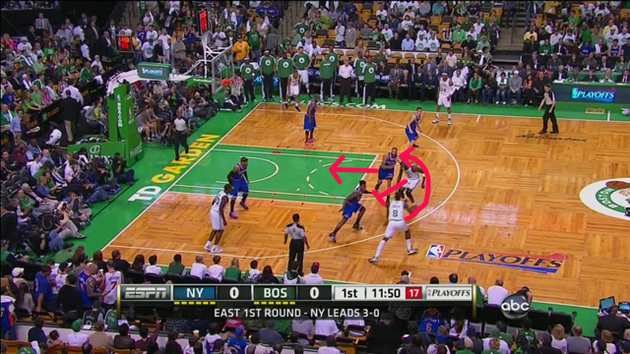 Because the Knicks rarely trap the pick-and-roll, the Celtics know Chandler will hang back. And instead of pulling up for a jumper, Jeff Green attacks Chandler's body, drawing Prigioni's help and opening up the perimeter kick-out. 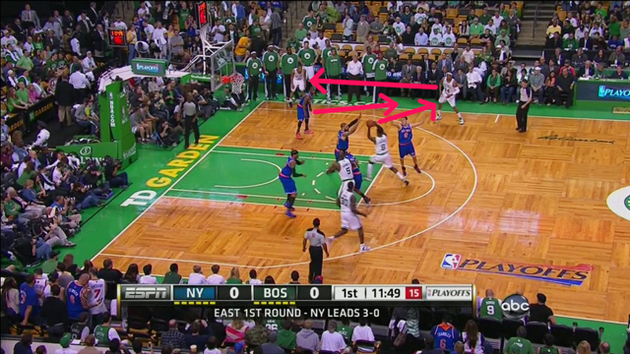 Green hits Pierce, who swings it to Bradley, who nails a three-pointer.

Want to hear a shocker? The Celtics ran the exact same play starting the game as they did to begin the second half. And what happened the second time? Pierce starts moving before Garnett is set. KG makes good contact with Felton on the screen, knocking him out of the play. Tyson Chandler backs off. Paul Pierce is able to turn the corner. 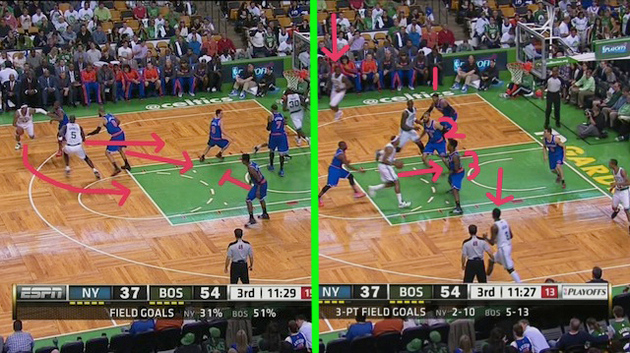 By the time Chandler steps up - keep in mind he's also tracking the rolling Garnett - Pierce is in the lane. Iman Shumpert shifts down to help. Pierce draws a foul. Not to mention Jeff Green and Brandon Bass, who are both wide open for the kick.

How Can New York Defend The Side P&R?

Because once the corner is turned, the ball handler is in the lane. Just as Tyson Chandler does here on a Pierce-Garnett side P&R: 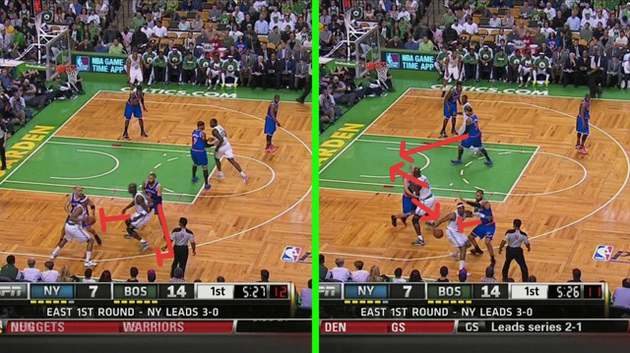 In fairness, Pierce is pretty deep in the corner, making the hedge a more viable play. But even more towards the center of the floor, players like Chandler and Martin are quick enough to recover. Not to mention that the Knicks are excellent rotators; players like Kidd and Shumpert and Martin and have the smarts to help on the backside. Here, Anthony cuts off Garnett before the Celtics eventually turn the ball over.

You may have heard this referred to as "down" or "blue." It's all the same basketball-speak for a type of pick and roll defense in which the man on the ball doesn't let the ball handler use the pick. Instead, he essentially boxes out the pick-setter and often blows up the entire play. (Here's an excellent explanation of the strategy, which you should read if only to learn that icing isn't just a drinking game. Also because if you don't read it, the next paragraph won't make much of any sense.)

So why icing? Because often times it leads to a weak-side jump shot, an awkward floater, or some other type of non-near-the-rim activity. And that's where Boston killed the Knicks in Game 3. They were able to penetrate and kick, or penetrate and finish. But icing that P&R will likely force jumpers - which, as the Celtics have shown in three out of four games this series, they suck at.

Is there another and accepted term for this? I don't know. Anyway, what I mean: you know how players scramble to find their men at the beginning of possessions? Even though they're all technically back on defense, they're not quite set up and ready to defend. For a Knicks team that prefers not to run, Boston, and Jeff Green in particular, was able to take advantage. See this play, in which Quentin Richardson squares up against Jeff Green, who's already got a running head start. 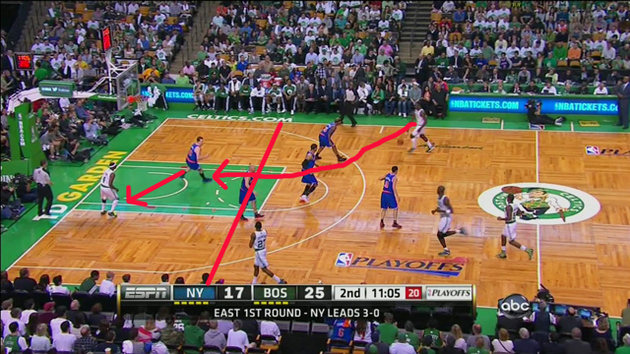 Notice how none of the Knicks players are in position (in front of the red line) to defend the paint (Novak is running towards Terry). This is essentially a one-on-one isolation, with Richardson backpedaling - possibly the worst position for a defender to be in. Green attacks, meets no secondary resistance, and draws a foul.

The semi-transition chaos also lends itself to another wrinkle: mismatches. Now, there are times when mismatches can be over-exploited or incorrectly assessed. But here we have Terrence Williams, in a similar scenario, finding himself against Kenyon Martin on the perimeter. And again, the two keys here are the Williams downhill-ing and the Martin backpedaling, coupled with the Knicks lack of interior presence. The blow by is easy, and Williams is on the line.

Alright, fine. There was that whole Boston made its shots thing that probably helped out matters. (44.7%! So good.) But let's not pretend like the Knicks were that terrible on defense. They locked up in the second half, again, and the first half wasn't too shabby either. The main difference was that Boston was knocking down contested looks. Like this Paul Pierce three-pointer: 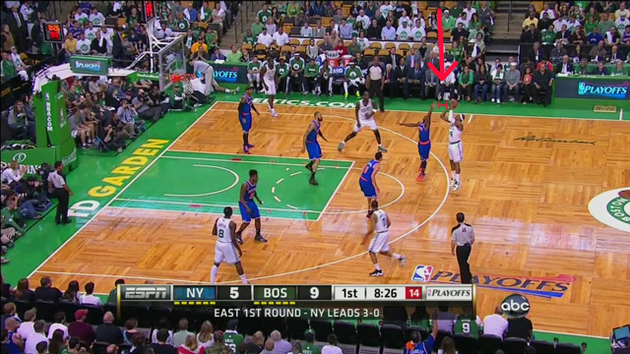 Pierce had just come off a Garnett screen, but Felton worked hard to get around it and challenge the shot. It also probably helped that Pierce was moving left to right, and Felton could therefore get closer to his shooting hand. And for anyone who's ever played basketball, you know that someone bothering your shooting side, as opposed to your weak side, makes things much more uncomfortable.

Let me start by acknowledging that Jeff Van Gundy is the best. Love him in the booth. But coming out of the break, he led off with this analysis of the play.

Yes, yes: good screen by Garnett. But what's really here, that Van Gundy doesn't mention, is that the shot is still tough. In my mind, at least, this is actually a marker of great defense and better offense more than any other particular thing.

So why highlight this play? Because the Celtics' revival narrative wasn't exactly on point. Their offense, despite these changes, still wasn't that great. 97 points with an overtime, remember? What's important here is that if the Knicks keep demolishing their offensive rhythm with isolations, this Boston offense - with the aid of some contested makes like the one above - is strong enough to win.