The Pacers have a great defense, but the Knicks still could have done a lot better on offense in Game 3.

The Knicks attempted 11 three-pointers in Game 3, three of which came in garbage time. So, eight. Not good for an offense that predicates itself on long range shooting. But it isn't just that the Knicks are jacking three-pointers at an historic rate; they're are also generating quality three-point opportunities at an historic rate, which, really, is the more impressive point. Much of that stems from the pick-and-roll - Felton penetrates, kicks, the ball swings, open three. Indiana's defense, however, is geared to funnel everything towards Hibbert to create a mid-range death chamber. Here's Melo pulling up from the free throw line post pick-and-roll, with nowhere to go with the ball (the shot went in). 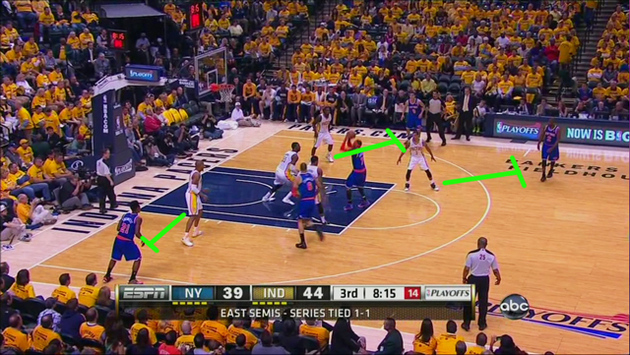 Everyone's staying at home. The options are shoot or drive, both of which are kind of horrible options. What's more troubling for the Knicks is that players like David West and George Hill, whom they picked apart in Game 2 by sticking Melo in the pick-and-roll, were more disciplined. Notice how they're both glued to the three-point line along with Lance Stephenson.

Melo shoots and scores, but that's not the point. This type of shot plays directly into Frank Vogel's 71-point scheming hands. Okay, so: what can New York do?

Shoot The Ball When You Are Open

Indiana's defense is really, really good. Quality looks are few and far between - which is to say that sometimes a semi-contested three-pointer early in the shot clock isn't the worst thing in the world.

1) On one particular possession early in the game, both Iman Shumpert and Carmelo Anthony passed up spot-up three-pointers. In some of the initial action, Melo hits Iman Shumpert with a behind-the-back pass off the pick-and-roll. David West, as he's prone to do, sinks in a bit too deeply, leaving Shumpert momentarily for the spot-up. 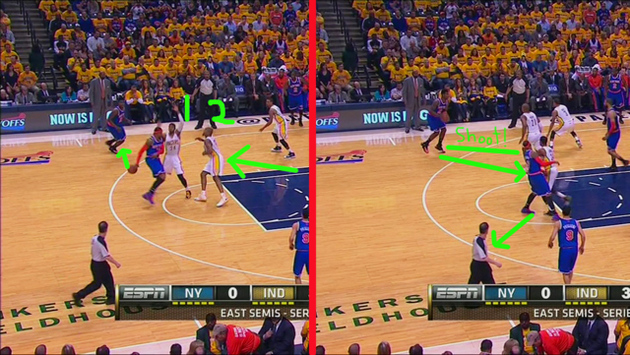 He pump fakes and drives instead, which as it turns out, is quite effective. Paul George mistakenly collapses, leaving Melo open on the kick. Shumpert hits him. 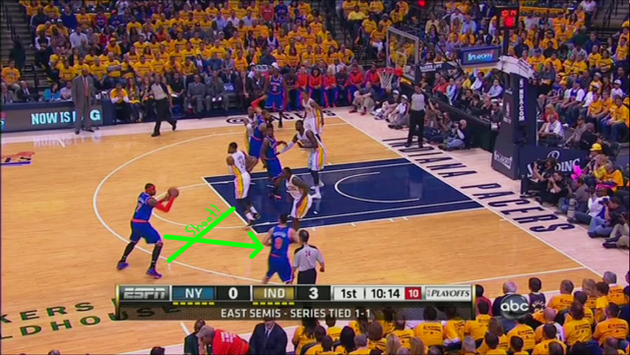 Melo doesn't even look for the shot and instead touch-swings it to Prigioni. They run a worthless pick-and-roll with Melo looking for it on the baseline. Eventually Prigioni is forced to heave an shot clock-beating three with Paul George's lengthy arm bothering him.

Neither of these shots is great. Maybe they're not even good, if you're the haggling type. But it's these types of shots stretch Indiana's defense. Even if they don't fall, New York's three-point reputation precedes itself. Lance Stephenson will close out a little more forcefully and carelessly; George Hill will fly by Raymond Felton. Three-point pump fakes will demand greater attention. Half-step over-extensions can turn into penetration. There will be other, non-three-point opportunities to be had, basically. Or, given the right ball rotation, other and better three-point opportunities. And, more often than not, they're the highest quality attempt the Knicks' offense will generate anyway. Because, again: Indiana's defense is really, really good.

2) Here's another example a few moments later: Tyson Chandler screens George Hill and frees up Felton to attack Hibbert. Hibbert, as per usual, retreats. But Lance Stephenson, on the weak side of the court, turns his back on Pablo Prigioni and creeps into the paint ever so slightly: 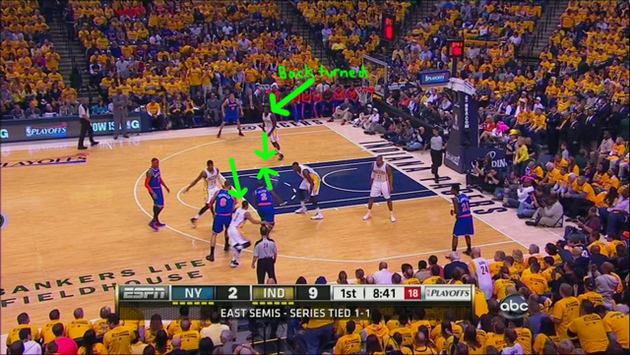 Felton dribbles right at Stephenson to freeze him. And it's that momentary back-turning plus the hesitation that creates enough room for Prigioni to shoot the ball. Except Pablo Prigioni doesn't particularly enjoy shooting the ball. He passes up the shot to reset things. 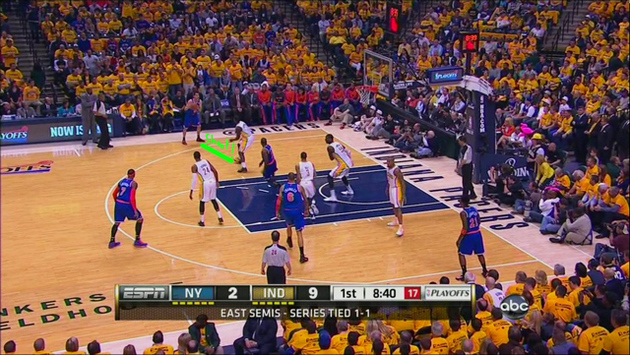 Moments later, Felton turns the ball over as he gets sucked into the Pacers defense. (More on this later. Like, right after the video.)

Roll to the basket, Tyson Chandler

Tyson Chandler is only effective on offense when he's setting screens or wreaking havoc around the rim: offensive rebounding, receiving lobs, what have you. Even if Chandler can't do a thing outside the paint, defenses respect him as a roller on the pick-and-roll because he finishes well around the bucket. What's particularly crucial, though, is that Chandler actually rolls to the rim. This is, like, important.

In Game 3, he simply didn't roll to the rim. Maybe it was because Hibbert was already waiting at the hoop with his arms wide open. Maybe it was by design. (Hopefully it wasn't the latter, because that design sucks.) Either way, Tyson Chandler chose to loiter around the top of the key after setting picks more often than not.

So, why did his inaction take a chainsaw to the Knicks offense?

1) Recall (or just scroll up), for a moment, that last video you watched in which Prigioni turned down a three and Raymond Felton turned the ball over. Take a peek at what Chandler does post-pick. Hint: nothing. 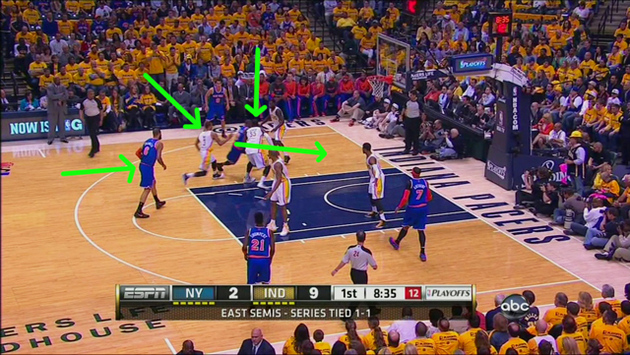 The first time it happens in the possession is no big deal because Felton dishes it quickly. But the second time (pictured above) handcuffs Felton. His only choice, other than a useless kick out to Prigioni, is to beat Hibbert baseline and outrun the coming double team with George Hill. Tyson Chandler, as you can see, is just chillin' at the top of the key. None of Indiana's other defenders are remotely concerned with him, and stay at home. Felton, under pressure in tight quarters:

b) has no shooters to pass to

c) has no wrap-around and/or lob pass to Chandler because he's camped out up top.

And then comes the turnover.

2) In this example, Paul George's failed attempt to ice the pick-and-roll allows Melo to seal him off behind; Hibbert is now the only obstacle between himself in the basket. But as we've seen in these playoffs, attacking Hibbert one-on-one isn't the smartest of moves. What is here, however, is an opportunity for a Chandler roll (dotted line) to create a two-on-one against Hibbert with Melo. Notice the gaping hole down the middle of the floor with Lance Stephenson and George Hill glued to the three-point line: 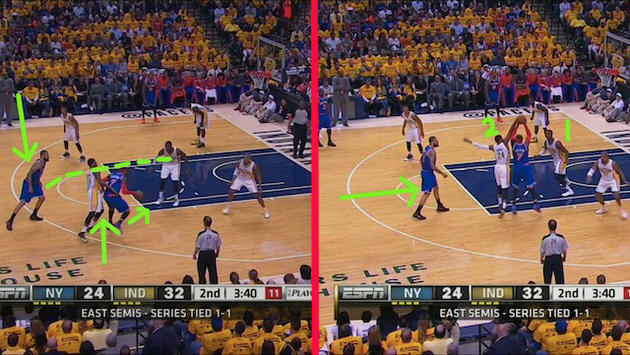 Anthony slows up, jumps in the air, and expects to see a rolling Chandler. He doesn't, gets caught, and instead flings the ball back out into Tyson's hands. Moments later, the Knicks lose possession.

And, finally: the poor execution trifecta. If there's any silver lining here, it's that plays like these (and there were many) were not Indiana's doing whatsoever. It starts with J.R. Smith using Kenyon Martin's pick before a pick is actually set.

Now, wait a sec: you might remember me praising Kevin Garnett and Paul Pierce for doing exactly that. Except the difference here is that Kenyon Martin doesn't flare his elbows and widen his stance and use every illegal screen trick in the book. He's a run-of-the-mill screener. So when Smith crosses over middle, George Hill is able to slip over the screen and blow it up. David West, who's eyes were glued to the pick-and-roll, has time to recover to Shumpert. 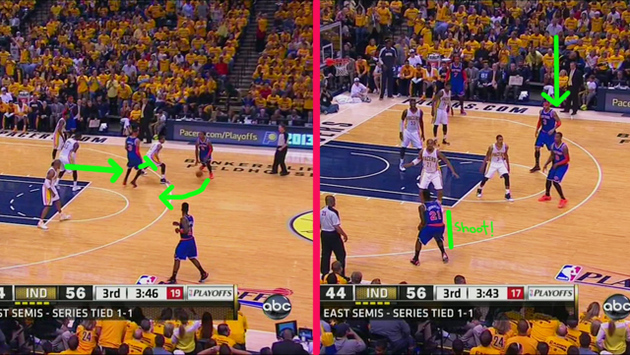 You'll then notice that Kenyon Martin doesn't roll to the rim, and therefore doesn't draw David West towards the paint any further. He eyes Hibbert, does an about face, and stares straight at Iman Shumpert, who now has the ball.

3) And here we have Shumpert, again, somewhat open. David West, in spite of Martin, had still sunk in too far, leaving Shump momentarily free for a clean look from distance. But does he shoot it? No. But unlike our example from earlier, when he managed to create an open Melo three-pointer by driving the ball, Shump does nothing.

a) J.R. Smith doesn't wait for Kenyon Martin to set the screen.

b) Kenyon Martin doesn't roll to the rim to collapse the defense, if only momentarily.

c) Iman Shumpert neither shoots nor drives the ball, and instead just meekly holds it.

And now that you're all well and prepared, the play in full:

So what happens when the pick setter does roll to the rim? Felton-Chandler alley-oops, for one (see below). But it's effects are bit more subtle, too. I've discussed this at length previously with respect to Kenyon Martin, so I won't rehash all the details here. But the key is this: rolling to the rim makes Chandler a viable scoring threat, and someone Hibbert can't just ignore. Anywhere above the free throw line and Hibbert's been known to simply double team someone off the ball. When Chandler rolls, he occupies Hibbert's attention and, at the very least, clears some perimeter space. Think of it this way: you can't score points near the rim if you're not near the rim.

So, what worked? Side pick-and-rolls. Again.

Except these handoffs started closer to the hoop, immediately putting pressure on Roy Hibbert to choose: point guard or Tyson Chandler. In most other pick-and-rolls, he sets up a lawn chair in the paint and kicks his feet (hands?) up. Yet this type of action compresses the space and turns him into a decision-maker.

1) Noitce Chandler's strategic (hopefully) placement here. He's far enough away from the hoop to draw Hibbert out - who's looking to avoid the three-second call because there's no Knick to double off the ball - but close enough to give Hibbert no time to back up. Felton's almost at the elbow by the time he receives the ball. 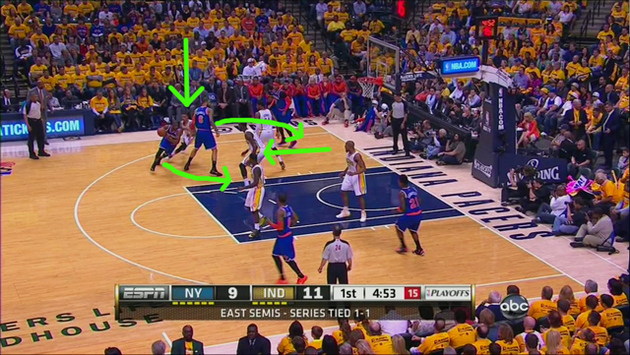 Because the dribble handoff is executed properly, George Hill is in an immediate trail position and cut off from defending the play. Chandler rolls to the rim (!), and Hibbert's in a pickle. Give up the Felton layup or risk the lob? 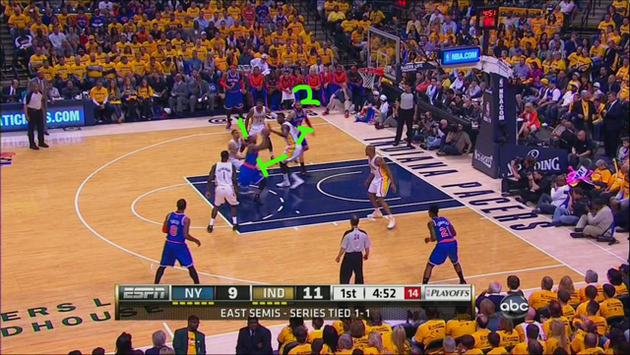 Hibbert, in a sort of panic, chooses neither. He half-attacks Felton, half-stays with Chandler. Felton, alley-oop hawk that he is, throws it up in the air towards Chandler, who slams it home.

The key here is Hibbert's proximity to the hoop. Unlike traditional pick-and-rolls, he can't just back up and wait. Help defenders don't have time to seal off the roller, and it's an old fashioned two-on-one.

2) And again, this time with Prigioni and Stoudemire. George Hill goes for the steal on the handoff, but misses. Prigioni, then, is free to slash to the hoop. 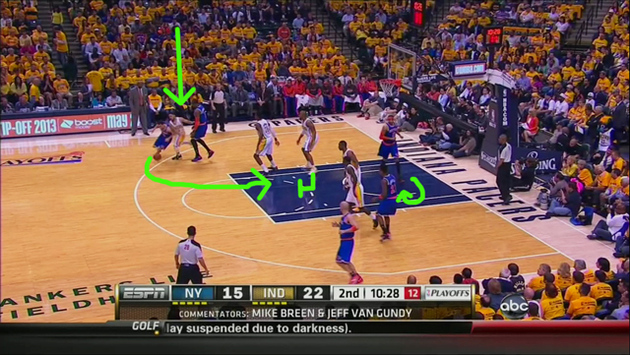 Roy Hibbert is out of the game, and the Knicks are in their two big set with Martin and Stoudemire. But this time, Amar'e doesn't roll. He's a capable mid-range shooter, remember, and helps to space the floor. Sam Young and Lance Stephenson, per Indiana's scheme, stay put on Iman Shumpert and Jason Kidd. David West, now must deal with Prigioni and Martin. 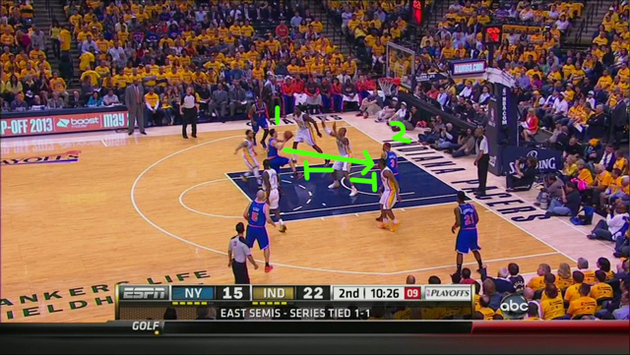 Except David West is no Roy Hibbert; he forgets about Martin and jumps with his hands straight up. Prigioni dumps the ball off and Martin throws it down.

Jeff Van Gundy remarked on this action in the second half - about how Hibbert's decision to confront Prigioni instead of staying at home was the wrong one (there was this Amar'e dunk, too - side pick-and-roll!). And while I agree with Van Gundy in this sense, the more important point is this: Prigioni is on the basket's doorstep. If he has to nail a few four-to-six-foot floaters, of which he is fully capable, fine. It's those 7-10 foot runners that are the no-nos.

There were many more mistakes and missed shots to go around; not to mention that Indiana was excellent defensively. But that doesn't mean New York has to keep shooting itself in the foot. There are things to clean up that can, hopefully, help to swing things back New York's way.