Let's pretend for a moment that the Knicks don't suck at the whole "basketball" thing.

Share All sharing options for: Game IV: A New Hope?

We're all reasonable people here, and as reasonable people, I think it is time to discuss the dark voodoo contained in my mom's famous Loser Dip, and its horrifying impact on New York sports teams: 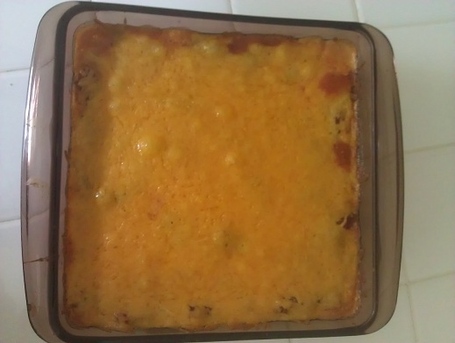 The sad legacy of Loser Dip dates all the way back to Super Bowl XXXV. It is a wonderful dip, but we soon became aware of its destructive power after my mother prepared it for a succession of disasters across the New York sports spectrum. If you are a New York sports fan, and your team suffered a horrible defeat in the first years of the 21st century, rest assured that this dip was involved. Now, the dip is only safe to eat after our team has lost all hope of victory.

The question now becomes: is it time to break out the Loser Dip? All the ingredients have been bought, every Knick seems to be coming down with the Plague, Tyson Chandler has suddenly morphed into the most unlikable athlete in the Tri-State area, and ZOMG SHUMP'S KNEE!

Still, I think we can hold off on the dip for at least the next 24 hours. The Knicks will be playing for their playoff lives tonight in Indianapolis, but I can see a few glimmers of hope. Let's break down some of the reasons for optimism going into Game 4.

1. Believe it or not, the Knicks still have a damn good offense.

As it stands now, the story of these playoffs has been this: the Knicks and their unconventional, untested approach to offense have not be able to withstand the intensifying cauldron of playoff defense. They struggled against Boston, and now they're being completely smothered by the Pacers in Round 2. It's a cute story, but it's not completely true - the Knicks averaged a paltry 96.9 offense efficiency mark in the Boston series, but they've actually upped their efficiency output in this series to 100.9, even after the embarrassing output of Game 3. Their ORtg in the second half of games - 106.6 - is pretty darn good, especially considering the Pacers D gave up an average of 99.8 points per 100 possessions in the regular season. They did not lose Game 1 because of smothering Pacers' D - they scored 95 points - rather, they lost because they failed to show up on defense themselves. If the Pacers' defense had consistently locked them down in the first three games, I would be ready to call them invincible and declare this series over, but that just hasn't been the case.

2. Neither of these teams do well with success

Remember the end of the Boston series? Boy, that was scary. The Knicks showed themselves to be a team lacking a true killer instinct - they tended to take their foot off the gas when they were in control. Few people remember this -since nobody was watching - but the Pacers had the same problem against Atlanta. They handled an inferior Hawks team at home in Games 1 and 2, only to get blown out in Games 3 and 4. In Game 6 they nearly choked away a 17-point fourth quarter lead, watching in horror as the Hawks pulled to within 3 with 2:41 left in the game. Now, all three of those games were on the road, so you might simply chalk their poor performance up to Indiana's drastic home-road splits, but they also took their foot off the gas at the end of Game 2 in the Garden, when they had a chance to take a 2-0 series lead. They played like a team content to get out of town with a win. Maybe they will play Game 4 with their usual home-court intensity, but they've shown a tendency to take their foot off the gas when ahead, and that might give the Knicks an advantage.

By all rights, Game 3 should have been a blowout - the Knicks stayed in the game because the Pacers couldn't hit shots. On the other end, Game 2 turned into a blowout in the blink of an eye for the same reason - the Pacers went ice-cold from the field for almost 12 minutes. These things tend to happen when you're the 22nd-ranked shooting team in the NBA. For all the plaudits they've earned for their defense, the Pacers's offense lacks that explosive element to close a double-digit deficit, or to turn a close game into a laugher. The Knicks still have that (at least, I choose the believe they do).

4. Tyson Chandler still has some pride.

If you asked people outside New York, they would probably name J.R. Smith as the Knick whose reputation has taken the biggest hit in this postseason. I'm not sure that's true anymore. Earl do what Earl do, and even the most die-hard Earl supporters can't be too surprised during those stretches when he suddenly forgets how to play organized sports. Tyson Chandler, on the other hand....dag, y'all. Dag. This guy was my favorite Knick - the rock throughout these last two tumultuous seasons. Who is this bearded pod-zombie in the Chandler jersey? Hear my voice, Tyson...come back to us, and I promise I will buy you a new set of normal-person capri pants and Ronald McDonald boots!

5. If God hates those "Everybody Wears a Yellow T-Shirt" stunts half as much as I do, he will surely smite the Pacers.

Congratulations, Indiana fans...sure, you were 23rd in the league in attendance this season, despite the fact that you've had a contending team for the past two years, but now you're wearing the t-shirts given to you by the Pacers' PR department. What true fans you are! These "fans" didn't show up during the regular season, and now karma demands satisfaction!

6. Reggie Miller is a punk-ass bitch.

Make no mistake, the Pacers have been the better team thus far in the series. The Knicks have a tall order ahead of them. But this is no insurmountable task. Two good basketball teams will play tonight - one has home-court advantage, the other has their backs to the wall. Let the best team win.