Everybody, not just the big guys.

Share All sharing options for: KnicksTape: Feel Free To Box Out, New York

Quick confession: I watched Game 4 - the first time - at a bar. In so doing, I forgot to DVR the game at home, which allows me to go full nerd and pull screengrabs and videos and what not in HD quality with my super fancy technequipment (read: Slingbox and screen capture program). Therefore, today's eye candy won't be as clear or sharp. Apologies.

Anyway: I've managed to re-watch the game a handful of times now. Every second. Every wonky double team. Every missed J.R. Smith shot. It's been hard to watch; KnicksTape, if anything, is about hope. It's about finding cracks and seams and parlaying them into advantages on either end of the floor. Except, right now, Indiana is the better basketball team. By far. Outside of that crazy 36-4 run in Game 2, they've outplayed the Knicks in 14 and 1/2 out of 16 quarters. Something like that, anyway.

But then again: Game 5 is at home. Steal Game 6, somehow, in Indiana, and then it's Game 7. Anything can happen in a Game 7, especially one that is, once again, at home. So while we're all probably feeling a little bit down in the dumps right now, chin up!

For now, logical chin. Even though Indiana's 54-36 advantage on the glass was overwhelming, it wasn't totally our bigs' fault! Sure, there were a couple of easy putbacks and the like, but we can spread the blame around a bit.

1) Take this long rebound off of a David West jumper. West, after taking the shot, starts backing up. Only Roy Hibbert and a crashing Lance Stephenson go in for the offensive board. Still, every single Knicks looks up towards the ball and ignores his man.

(Just trust me that the ball is in the air.) 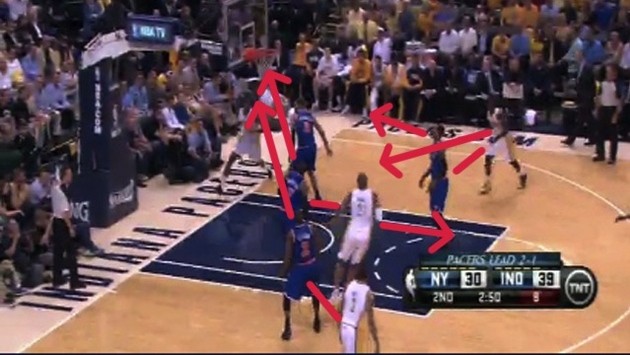 Melo, as the power forward on the floor, doesn't chase West for the box out. What NBA players fail to recognize is that a successful box out isn't a singular thing; if every player on the team boxes out every player on the other team, it creates a vacuum of space in which only defensive players are close to the ball to grab the rebound. Here, none of the Knicks box out, starting with Anthony.

J.R. Smith ignores Lance Stephenson. Raymond Felton doesn't look at George Hill once. Ian Manhinmi just kind of runs around Tyson Chandler, who doesn't seem to care all that much. This rebound, then, isn't a matter of rebounding skill; it's a matter of luck that nullifies the natural defensive rebounding advantage. So it should come as no surprise that the ball just so happens to bounce right to David West.

2) The Knicks are going to give up offensive rebounds. This is a thing New York might as well come to terms with. And it's not just because Indiana is a better rebounding team; on one play in the game, Chandler boxed out Hibbert perfectly but was undone by an unlucky carom off the rim. That's just going to happen. What's inexcusable are plays like these: 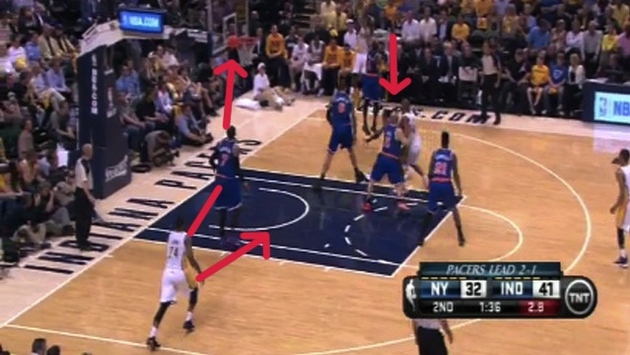 That's the photo on shot release. Roy Hibbert is on the ground. Paul George is at the three-point line. Jason Kidd is actually doing a mighty fine job wrapping up David West and doing that probably-illegal-but-sometimes-effective front-facing box out thing.

But then the shot goes up, and Paul George flies in for the rebound. Carmelo Anthony peeks his head around, sees the incoming George, and continues to ignore him. George times his jump and snags the ball. 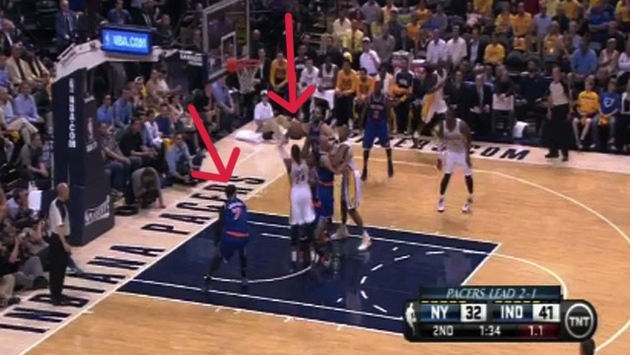 But here's where it gets worse: moments later, it's wham bam thank you George Hill open three.

Of the 13 offensive rebounds grabbed by the Pacers in Game 4 (a few were miscategorized by Synergy), nine were due to missed box outs. So it wasn't all just Roy Hibbert and David West. And even some of Roy Hibbert's boards weren't even Roy Hibbert. They were just not Knicks, if that makes any sense.

3) This play is what I mean: Tyson Chandler doubles on the pick-and-roll, leaving Hibbert free to roll to the basket. A fine play, especially because it forces a particularly difficult shot from Paul George. 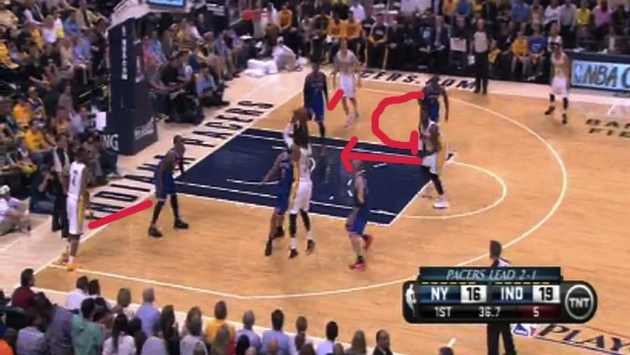 Carmelo Anthony, who actually boxes out this time, can't seal off two people at once. The onus here is on Raymond Felton, whose job it is to pinch in and, at the very least, get in Hibbert's way. No one's expecting him to out-muscle or out-jump Hibbert - just kind of stick your body in there and make him run you over. Boxing out, really, isn't a size or strength thing. It's about positioning. And even if George doesn't shoot here, that's Felton's rotation anyway. 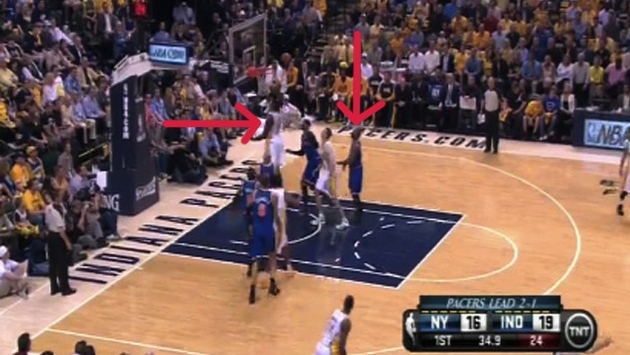 But Felton gazes at the ball instead, leaving Hibbert free and clear for the offensive rebound and putback dunk.

There were a lot of problems in Game 4, as per usual, and this was only a small sampling of a small part of it. But, as has been the theme often in this space, it isn't necessarily a matter of Indiana being better; it's a matter of New York not making the extra effort, or, sometimes, even the effort at all.