...and other keys to New York's Game 5 performance.

Share All sharing options for: KnicksTape: The D.J. Augustin Effect

It wasn't pretty. Okay, it was ugly. The game was probably closer than it should have been. But it was a win. One more of those things in which the Knicks score more points than the other team, and it's off to Game 7 at home. Hope is a nice thing, sometimes.

The important question - as it pertains to Game 6 - is how do the Knicks carry this momentum over? Why was last night different from all other nights?

1) It wasn't just his offense and his punishing three-pointers after careless double teams. Indiana felt his absence defensively, because D.J. Augustin simply wasn't able to corral New York's pick-and-roll offense. Hill is long and rangy and bothersome; even when Chandler or Martin was able to make solid contact on screens, he and Hibbert were able to box in Felton and create this uncomfortable wedge that didn't lend itself to passing lanes. But more often than that, Hill managed to blow up the pick-and-roll entirely by icing it, such as in this sequence from Game 3: 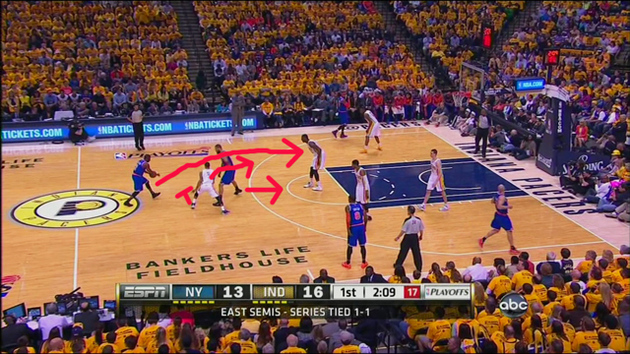 Notice the angle Hill takes as Chandler comes to set the screen. It isn't just that he's forcing Felton left; he spins his head around, feels the screen and angles Felton away from the screen. This forces Felton into an open space at the left elbow at half-speed, because he can't just go right into Hibbert. Hill, then, is able to fight through any Chandler contact and recover: 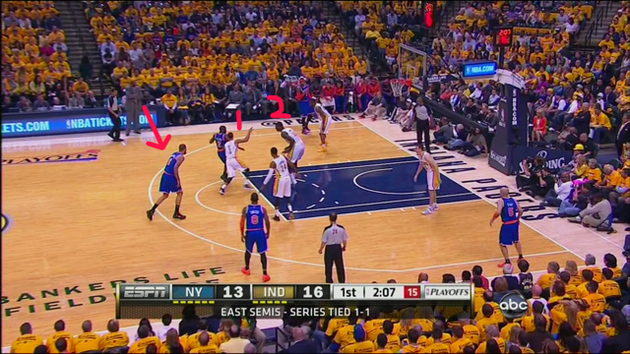 The easiest way to beat the pick-and-roll ice is with a quick pass to the top of the key. The sort-of-double team leaves the big man wide open for a pick-and-pop, as opposed to roll. But Tyson Chandler, save for one jumper in this series, will not take that shot. Kicking the ball out to him on that spot of the floor renders the entire play moot. In this play, Felton's pass to Chandler - which already signaled the end of the action - was intercepted by Paul George:

What Did D.J. Augustin Do?

1) A lot of nothing, defensively. He knocked down his usual handful of threes and ran the offense with moderate effectiveness, but he basically bent to Raymond Felton's will at every turn. He didn't ice, he didn't box Felton in, and he just generally kind of blobbed his way through defensive possessions. On this play, Augustin's steal attempt brings him closer to Felton than he probably should be. Not the worst thing in the world, but at no point does he peek his head around or even to check to see if a screen is coming. Paul George, in fact, sniffs it out for him by sliding into a pre-hedge position. 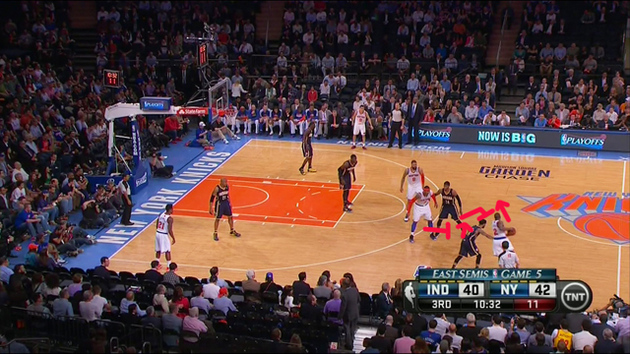 Anthony moves to set the screen; Augustin puts on his full jets to make it over the screen; Felton, sensing Augustin's overplay, hits him with a crossover and rejects the screen: 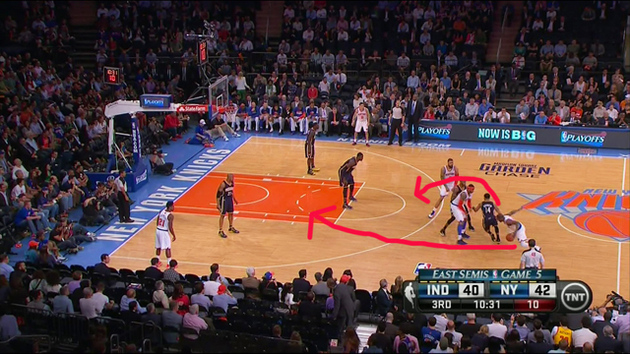 Well, reject the screen in that Felton doesn't technically use it. But Augustin, as you'll see below, still has to wade through the screening bodies. What Hill would have done here is iced off Melo; by boxing him out, he would have given George enough time to funnel Felton towards Hibbert, or at least hedge until Hill could recover. Instead, Augustin fights so hard not to trail Felton that he gets crossed. Moments later, Felton's doing his usual drive-and-kick thing to hit Prigioni for a three.

2) Even so: Augustin's inability to pre-diagnose the pick-and-roll became ever so clear when the Knicks ran a choice pick-and-roll action from the top of the key - choice in that Felton could go left and use Copeland, or go right and use Martin: 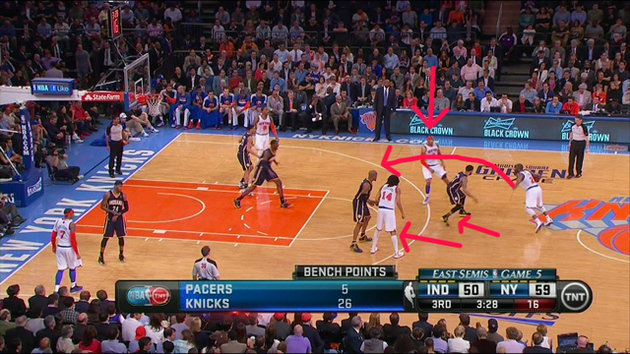 Augustin has no idea which way he will go - his feet are straight and not guiding Felton either way - and instead lets Felton dictate the play's direction. This puts him at a natural disadvantage, allowing Felton to roam free in the paint and putting pressure on Indiana's other four defenders. This time Felton uses the Martin screen, creating a two-on-one against Hibbert. Felton hits Martin with the pass, and Martin finishes at the rim.

Here it is again, on the very next play. Augustin, again, doesn't dictate antyhing. Even though he has angled his body to force Felton right, he's giving way too much space. Felton uses that breathing room to rock him right and cross back over left. 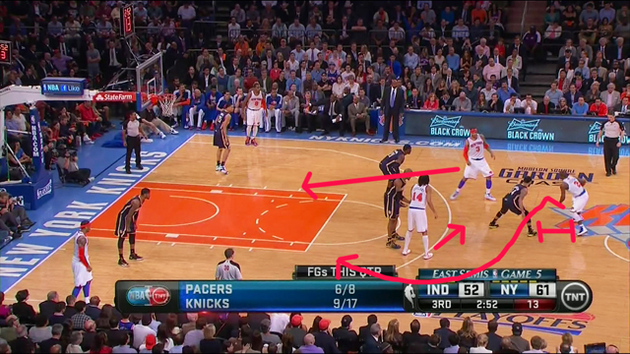 What's more, here, is what's cool about using Chris Copeland on the floor. Even though Felton slides by Cope's shoulder, it's Martin who rolls and Copeland who pops. That creates enough confusion within Indiana's defense to give Felton the passing lane. Martin ends up drawing a foul after collecting Felton's dish.

Forget, for a moment, that Copeland shot the ball well and grabbed a nice offensive board and played mediocre to solid defense. Forget that you love him because who doesn't love Chris Copeland. Forget that he's a cute Disney princess. Forget all that. What Copeland brings, over Shumpert or Kidd or Stoudemire or whomever, is an outside threat. You can't give him space. Not only does he have the range to scorch from three, but he also has the confidence to take those shots. We saw it in Game 5: he was unafraid to jack contested looks, and skilled enough to make them. Just take a look at the difference between David West's on-ball positioning against Copeland vs. Shumpert: 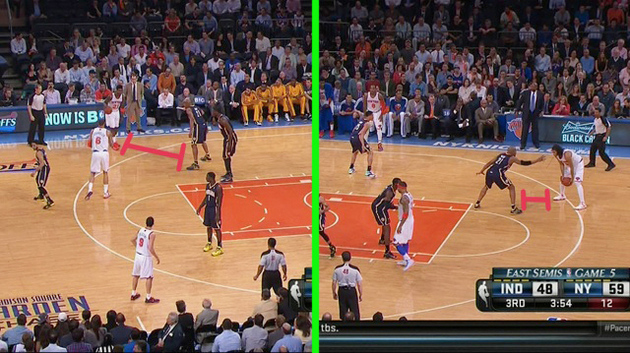 Where it's even more effective is off the ball. You'll notice that Copeland forces West to stick to him completely, giving Melo space to operate one-on-one from the elbow. There's essentially zero help on that side of the floor. Shumpert, meanwhile, doesn't draw the same attention: 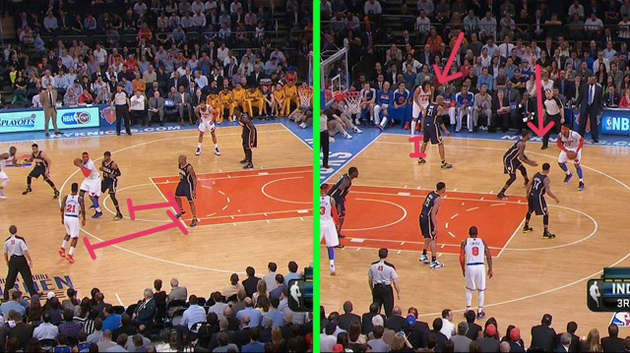 And what happens on that Cope off-ball play? Melo uses a series of fakes to create space for a pull-up, and no help even pretends to come. Copeland's mere presences allows Melo to operate on a true island.

What Else Worked? The Cross-Match In Transition 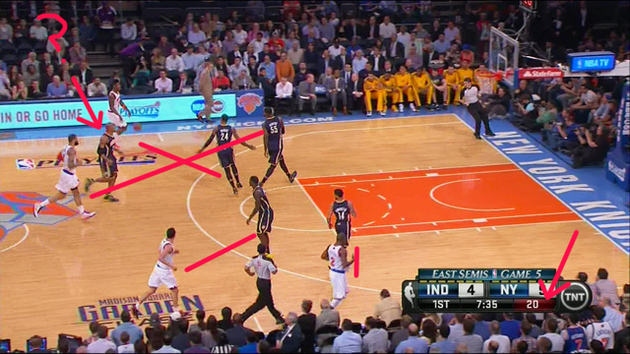 This causes a mismatching sequence that leaves Carmelo Anthony at the top of the key against David West. 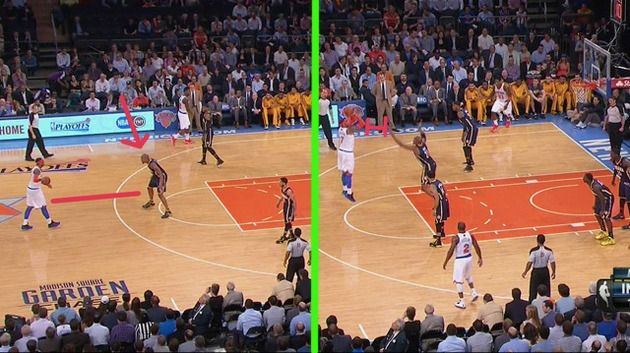 Melo goes isolation, and West is nowhere near able to contest Anthony's shot like Paul George can.

2) And again, this time with Prigioni pushing the ball. He swings the ball to Felton on the other side of the court, leaving Roy Hibbert on Anthony on the baseline. Not good. 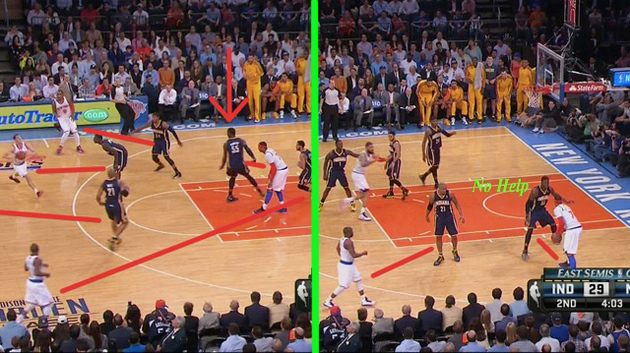 Melo walks past him for the layup.

In spite of all the positives, New York's defensive rotations were still pretty terrible, especially in the second half. And what's so maddening isn't just the mistakes themselves; it's the type of mistakes, and how they're just so boneheaded. New York should consider itself lucky because Indiana missed a ton of wide open shots and free throws (19/33). 75 points allowed doesn't quite capture the level of luck and ineptitude.

1) This play here was my personal favorite, if only because it helped usher Jason Kidd and Amar'e Stoudemire to the bench on a permanent basis. (For what it's worth, Stoudemire is just a solid dude - he was still the first one up off the bench high-fiving teammates and celebrating at timeouts.) Lance Stephenson and Tyler Hansbrough run a pick-and-roll - probably the least dangerous P&R combination possible - as the first quarter comes to a close: 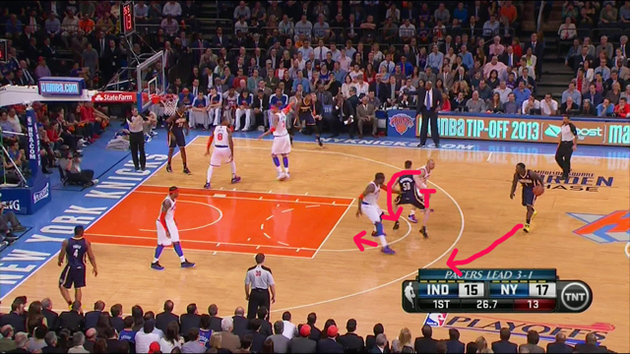 Kidd, despite the space to do so, doesn't step over screen. He goes under it, and manages to run into Amar'e Stoudemire. Amidst the confusion, neither player picks up Stephenson. 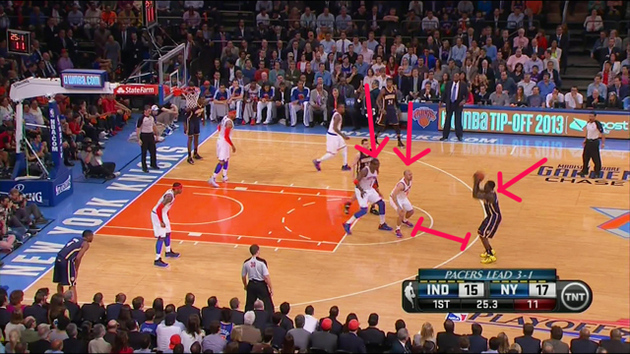 He's left wide open for a three-pointer, which he bricks.

2) There were little plays like that all over the place. On this Paul George-Roy HIbbert pick-and-roll, Pablo Prigioni pinches in way too far from the opposite wing: 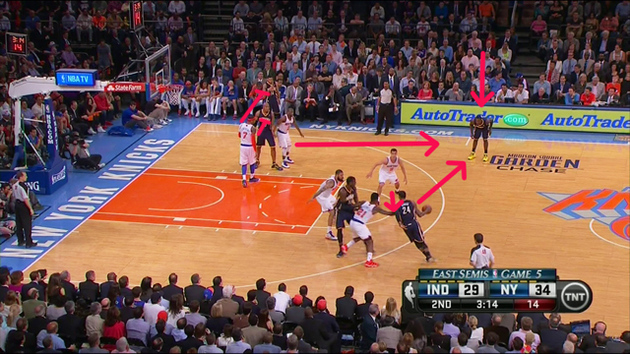 George swings it to Lance Stephenson, whom Prigioni has just abandoned. Raymond Felton then rotates over from D.J. Augustin in the corner, leaving Melo to handle both David West at the elbow and Augustin. But the players are close; it's not that hard to guard both. Just stand next to West, and there's plenty of time to recover to the corner if need be. Is that what happens? No. Not at all. 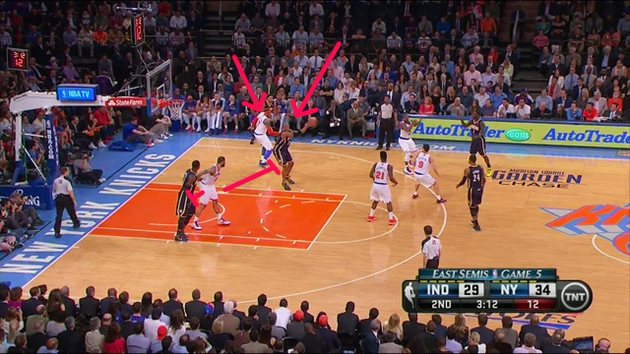 Melo inexplicably races over to Augustin, leaving West wide open. Stephenson dumps it in to him for an easy opportunity.

Yes, West missed. But the two-on-one created by Melo's impossibly poor rotation leads to an offensive rebound and Tyson Chandler's eventual destruction of Lance Stephenson at the rim. As fun as that was, it also led to two free throws and helped knock Chandler out of the game later due to foul trouble.

So: in that the Knicks won, Game 5 was good. In that George Hill might continue to sit out, even better. But the defense isn't all that the score cracks it up to be, and a large portion of this success is based on Woodson's rotation choices. And the Knicks still only scored 85 points - often times they reverted to iso-Melo. So for all the good that comes with winning, take Game 5 for what it was: a scrapfest that New York managed to eke out.