Keep Pablo: A Movement is Born

Do your part to keep Priggie Smalls in New York.

Share All sharing options for: Keep Pablo: A Movement is Born

I know the day after Game 1 of the Eastern Conference Finals seems like a ridiculous time to discuss off-season moves, but these are desperate times in Knick-land. According to Marc Berman of the New York Post, Knicks guard and future godfather to my future children Pablo Prigioni is in the midst of considering his options for next season. There is a very good chance that this prince of men will leave New York for good.

This simply cannot stand! First of all, it will leave the Knicks a worse team in 2013-14. Though he wasn't truly appreciated until his ascension to the starting role (and the corresponding Knicks' win streak) toward the end of the regular season, Pablo was a consistent performer throughout - he ran the offense, set up his teammates, hit open threes, and he was unique among Knicks guards for a rather peculiar thing he did, where he tried to stop the opposing player from scoring. What shall we call this skill - anti-offense? Whatever it was, he did it, and it was cool.

But so what if he's good at basketball - that's never stopped the New York Knicks from ditching a player before, right? The Pablo Phenomenon is about so much more than basketball - do yourself a favor and check out "pablo prigioni interview" on Youtube. The man they call "Priggy Smalls" has been a ray of light penetrating deep into the endless void of the Dolan universe.

I, for one, am sick and tired of sitting on my thumbs while another beloved Knick rolls out of town. It's time for what the Argentines (maybe) call a movimiento. We need banners (preferably in Spanish), t-shirts, outsider art, protest marches, the whole shebang. Personally, I don't think we need AK-47s at this point, but I don't want the NRA on my ass, so bring 'em if ya got 'em! ¡Viva la Pablocura Revolucion!

We must proceed with caution - many movements fail because they do not have a clear plan for achieving their objective. As Knicks fans, we already know there is nothing we can do to affect the organization's decision-making process. Instead, let us focus on Pablo himself, on easing his decision to come back to the Knicks by making his time in New York as comfortable as possible. Here are some ideas.

It seems as if J.R. Smith had a plan to make his brother Chris part of a package deal in free agency. J.R.'s performance in the playoffs might just have torpedoed that whole deal...and if it did, that torpedo was pretty much the only shot to hit the mark in the past few weeks.

Now, I don't know if Pablo has any brothers - he seems like he comes from a good Catholic family, so I'm guessing he has at least five or six. We need to find these los hermanos de Pablo. Can they play? Who cares....put them on the bench anyway! A bench full of Prigionis would be the most adorable thing ever. There's a reason puppies come in litters.

In his article, Berman made mention of the fact that Pablo's wife felt uncomfortable in New York because she can only speak Spanish. I'm not sure exactly where she was spending her time, because a whole lot of New Yorkers speak Spanish, but whatever, I'll play along.

For years I've heard talk that this country needs an "official language" policy - it always seemed un-American to me, but desperate time call for desperate measures. Congratulations, everyone, you now have an official language, español. Para la esposa de Pablo, debe hablar español.

3. Ban all car traffic in New York, only allow vintage mopeds on the streets.

4. Give him the greatest gift you can give any Argentine.

If I know anything about Argentines (and I don't) it's this: they really, really want the Falkland Islands. They even fought a war with England over them in the 1980's. Well if that's what Pablo wants, then that's what Pablo gets.

I say we declare war on England and take control of the Falkland Islands, then we hand them over directly to Pablo. Let the man be a sovereign nation unto himself - Prigionia. He can chill out with his family and ride his vintage mopeds in peace. Somehow, I get the feeling that the guy who worked so well with Raymond Felton will feel comfortable there: 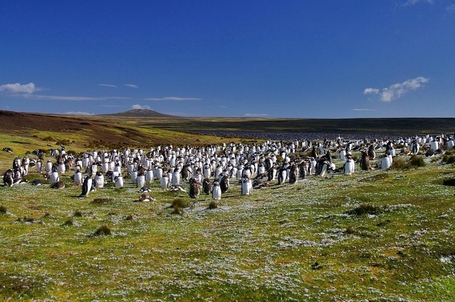 If you have any more ideas, let us know in the comments section. In the meantime, start making posters, organizing sit-ins, and writing your Congressmen (in both the Northern and Southern Hemispheres). The Keep Pablo Movement begins today!