KnicksTape: Iso what you did there

Even when Carmelo is effective in isolation, the Knicks are struggling.

Share All sharing options for: KnicksTape: Iso what you did there

What the hell. Why are we still here? I have a softball game Friday at 7pm. Now I have to DVR the game because you don't miss softball.

So where do we aim our blame tentacles? The offense, again, and the isolations, again. But there's a deeper problem here than just force feeding the ball to Carmelo Anthony, or J.R. Smith one-on-one-ing as he pleases. It's that these are legitimate offensive sets. The direct play call is an isolation. It's, "Hey Melo, go stand over there. Here's the ball. Go."

That hasn't worked this series, and it's not what has carried the Knicks all season:

As one of the league's best offenses during the regular season, the Knicks used 15.9 isolations per game. In the playoffs, it's been 26.6.

Isolations have been icing on the cake. When Melo is grooving from that favorite baseline spot of his, the Knicks offense goes from really good to virtually unstoppable. But the key in all this is ball movement and touches and flow. Basketball isn't played by robots. Players need to feel involved in the game to remain effective. Not touching the ball for minutes at a time on offense freezes players out of rhythm.

So how do we fix this? Let's ask coach:

"'Offensively, we were searching,' coach Mike Woodson said after Game 5. 'I'll go back and break this tape down, and we've got to come up with another plan.'"

Hey, us too! Tape is fun. First, what went wrong.

What are direct isolations? They're the isolations that occur by play design. That is to say, the play is designed to isolate a player somewhere - most often Carmelo Anthony on the baseline. These plays are particularly awful because 1) there's no secondary action or movement on the weak side when players clear out. 2) The Knicks often eat up the shot clock getting into an isolation, preventing any other type of set should Melo kick the ball out.

Here we have Pablo Prigioni entering the ball into Carmelo Anthony at the high post. Check out how much time is left on the shot clock by the time Melo gets the ball and squares up: 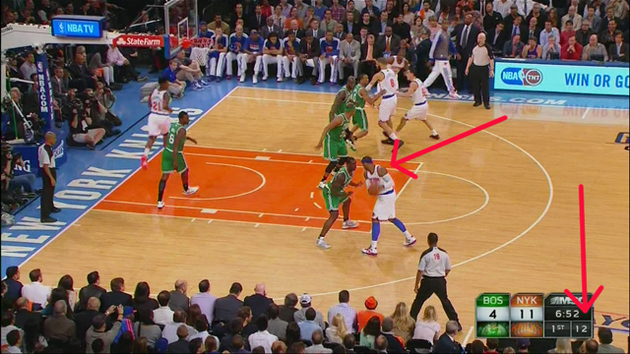 There's absolutely no need for Melo to isolate with so much time left. Run something else, then veer into isolation as a last resort. Alas, that's not what happens. Melo's various jabs and body shudders and whatnots, coupled with the Knicks crowding together on the other side of the court, allow Boston to set up its defense and discourage Melo from attacking the paint. And with the Knicks all cleared out in the opposite perimeter, there's no chance for an offensive rebound.

The other part of it is forced isolations, which basically amounts to New York handing the ball to a certain player with the shot clock winding down. This, in part, is why Carmelo Anthony is so valuable: no possession is ever lost with the NBA's best one-on-one creator on your team. And I'm fine with these plays, if they have to come to that. As long as something else is bubbling before iso-Melo, I'm all smiles. 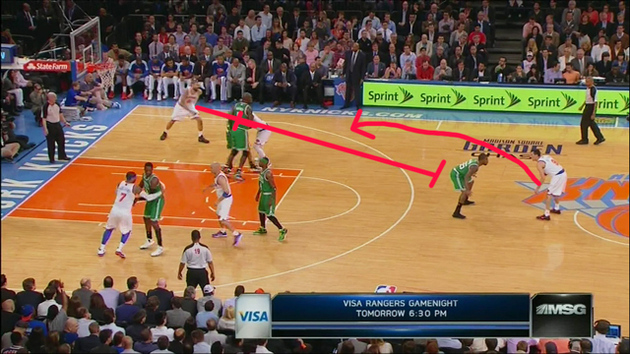 Chandler then pops out for the pick and roll with Prigioni: 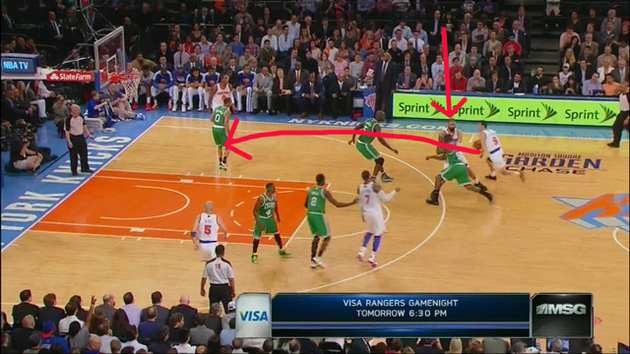 Prigioni runs off the screen towards the paint, only to jump in the air and fire a cross-court pass to Jason Kidd. It's off target; the play is blown up, and there are eight seconds left on the shot clock. Here's where handing it to Melo to let him do what he does is probably a good idea: 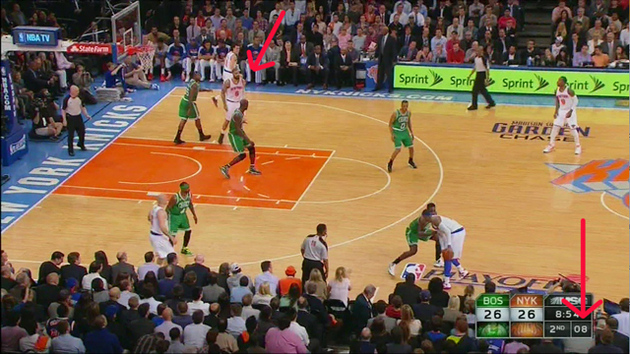 Melo drives to the bucket and misses a runner. Fine. There was a mildly uncreative pick and roll play that didn't work, at least. The Melo isolation wasn't designed.

So how did this play out over the course of the Game 5?

Wait, what? 47.1%? Turns out Melo wasn't so bad in direct isolation. Still not good, but not totally terrible. What about the rest of the series?

(Other Knicks were excluded due to insufficient sample size - their isolations are almost always shot clock-driven.)

Alright alright, that's a lot of data to sift through.* (see bottom of post) Here's what you need to know:

2) There's no correlation between isolation success rate and offensive rating: So, based on this data, it doesn't matter how successful J.R. Smith and Carmelo Anthony are in these situations; that they're isolating a lot is ultimately detrimental.

3) Carmelo Anthony had his most efficient isolation game in Game 4. So, even though everyone was yelling at him on Twitter during the game (myself included), it was actually the best effort we've seen. It just so happened that it was also the Knicks worst offensive game as a team (92.1 offensive rating) by far.

Don't mistake all of this for causation; there's really nothing else to do here other than nod your head and stroke your beard and keep eating yogurt. But: the data is suggestive enough. The isolations are deceivingly harmful, even when effective. Which, of course, begs the question, why? And so I return to my earlier premise: the isolations destroy any sense of offensive rhythm and the rest of the don't function as effectively - they're less inclined to run plays with as much gusto, and so everything just devolves into isolation.

How You Swaggin' So Good, Raymond Felton?

Why won't Mike Woodson feature Felton in the pick and roll more, you ask? No idea. But featuring Raymond Felton as a primary option is a recipe for disaster because his game isn't that; he picks his spots and attacks and facilitates and just makes good decisions. You want the ball in the hands of your best decision maker, and Raymond Felton is that for New York. We just don't need him scoring all the time. So how do we turn Felton into an effective and indestructible cyborg?

I've already suggested that the Knicks stretch the pick and roll out further from the basket (more on this here), but Game 5 presented something else that Felton is doing unusually well: keeping the his man on his back.
Huh? Think of it this way. The Celtics rarely switch the pick and roll, and usually try to fight over screens. What ends up happening is that Felton's man is in a trail position. But a cardinal sin of point guards is to straight-line attack the rim or take a wide angle, because it allows the trail man to recover. The key is to keep your defender on your back, and force the man guarding the P&R roll man to choose between the ball handler and the roller.
1) Fine, fine, here are some pictures: Here's Felton coming off the screen: 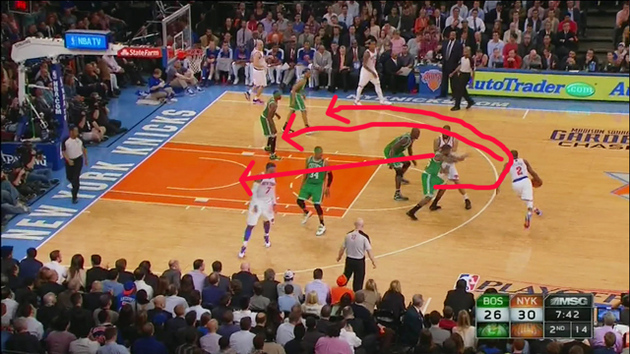 And now here's Felton cutting across Terrence Williams to keep him stuck behind: 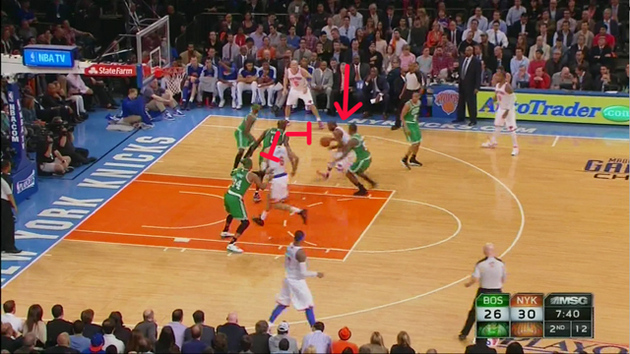 This puts Williams in an extremely awkward position. He can't just, well, run over Felton, and any attempt he may make to block him from behind could easily result in a foul. What Felton has done, then, is essentially render Williams' presence moot by cutting across his front. (Notice how Williams doesn't contest the shot because he doesn't want to foul.) Not to mention that he's put Garnett in a two-on-one as well.
Okay, video time:

2) Remember that whole icing the pick and roll thing I mentioned the other day after Game 4? Well it turns out that Doc Rivers reads Posting and Toasting, because he did that to us. Damn you, Doc. Or, wait. Thanks. Because Felton, in all his glory, is able to take advantage, despite Boston's change in its pick and roll defense scheme. First, the ice: 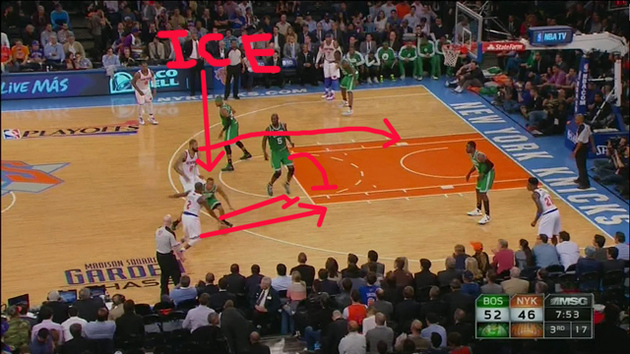 Avery Bradley completely cuts off Chandler, and forces Felton right into a trap with KG. Except Felton slows down and draws KG out, giving Chandler time to roll to the rim: 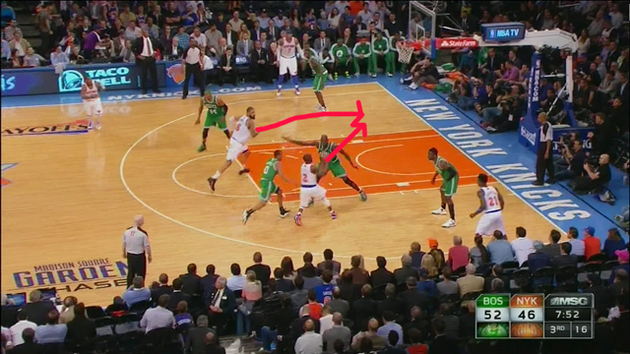 *Quick beef: mySynergySports, which is an extremely helpful tool for sorting through game film and scrounging up interesting statistics, does not consider post-ups to be a form of isolation. Any discerning eye can most often see that this is an incorrect categorization: just because a player's back is to the basket doesn't mean he's not isolating. Anyway: my point: when you see various people Twitter-ing on about the Knicks' isolation stats - often gathered from Synergy - it's probably even worse. /facepalm