KnicksTape: How To Solve The Roy Hibbert Problem

Share All sharing options for: KnicksTape: How To Solve The Roy Hibbert Problem

How many times did we see this play in Game 1? 14,368 times, or so. So why is Roy Hibbert so effective in these plays? Because he throws his hands straight up in the air and doesn't move. It also helps that he's 7-2. And what's worse for the Knicks is that his defense remained superb and consistent against two classic Knicks' offensive sets.

1) Here we have Carmelo Anthony in his classic baseline isolation with Hibbert in a help position. 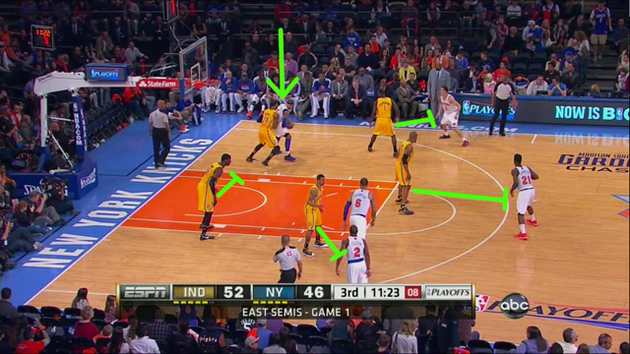 Anthony proceeds to barrel into the paint, only to meet Hibbert with his hands straight up in the air. Anthony tries to draw the foul; the refs aren't having it because Hibbert's hands are, well, straight up in the air. Sure, he may have fouled Anthony once or twice throughout the game, but his defense was exceptional in its stability.

But what's important here - and different from the Celtics' defense against Melo - is that they don't have to stack the paint with a strong side overload. Boston didn't have a Roy Hibbert; they negated their lack of size by generally cramping things up. What Hibbert does, more than just protect the hoop, is allow Indiana's perimeter defenders to mostly stay at home. So when Melo is driving to the basket, there's really no one to whom he can kick the ball out. 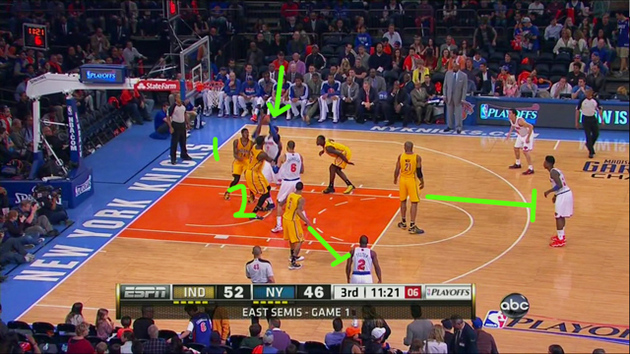 David West stays on Shumpert. George Hill barely leaves Felton. Lance Stephenson is only in the vicinity because he foolishly tried to swipe the ball from Anthony as he drove in. The only real help defender is Hibbert. But, as we saw all game, that's all Indiana really needs. Now at full speed:

2) With Melo or Felton or anyone as the ball handler in the pick-and-roll, all Hibbert did was back up and keep backing up and back up some more and then back up. There was oodles of space to attack. Take advantage, right? Well, not exactly. What Indiana is doing is forcing the Knicks into the least efficient shot in the game: the mid-range jumper. With Hibbert in protect-the-rim-mode and the rest of Indiana's defense committed to staying at home against shooters (that's all Frank Vogel yelled about in "Wired" segments), it left the Knicks with only two options: pull up or take your chances one-on-one against the big fella.

On this pick-and-roll, Anthony decides to attack. But check out how far backed up Hibbert is as the Tyson Chandler pick is being set, as well as the position of the other Indiana defenders. 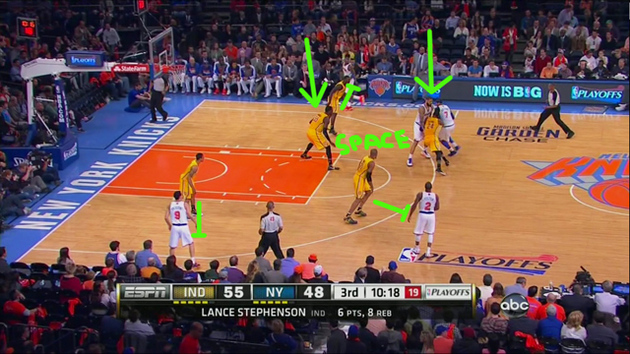 Hibbert's already in the paint before Anthony even crosses the three-point line. Indiana's other defenders are not even remotely concerned with the paint (only Stephenson ends up doing his dumb swipe thing). This matchup - Hibbert vs. anyone - is exactly what Indiana wants. It's a sort of cruel irony that the Knicks are now being punished for their offensive aggression. Against Boston, all we ever wanted was some paint penetration. But now that they're facing Indiana, the Knicks are forcing it at the rim a bit much. And now the play in real time:

3) Here Felton selects the other option, the pull-up. But again, notice Hibbert's complete disinterest in whatever's going on near the three-point line: 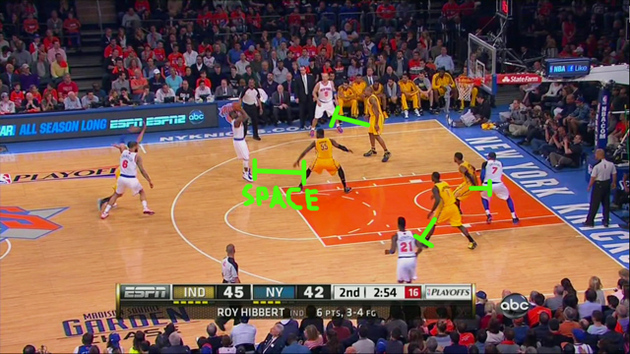 Felton has nowhere to go with the ball; Hibbert dares him to shoot. He does, and he misses.

Granted this shot is particularly wide open, and there's often the threat of the picked defender lurking for a block from behind. But you've got the point, hopefully. Indiana is dangling mid-range cupcakes in front of New York.

Glad you asked! First, make those mid-range shots. The Knicks have to give Hibbert a reason to leave his nest, and missing mid-range jumpers and driving furiously at him won't get the job done. Second, get out in transition and semi-transition. Attack the paint when Hibbert is, you know, not there.

Roy Hibbert, the Pacers' defensive scheme and how the Knicks can adjust 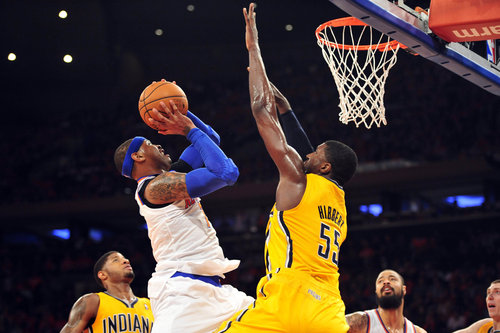 More from SBNation.com on how the Knicks can work around Roy Hibbert going forward.

But more can be done. More selective offensive programming, basically - which is to say, Mike Woodson has to get a bit creative and misdirection-y in the offensive quarterbacking. Because the key isn't necessarily dismantling Indiana's defense by out-executing with your offense; it's creating opportunities for the Knicks to do what the Knicks do well: three-point shooting and penetration off of swift and precise perimeter passing.

The Knicks have a sneaky variation on the side pick-and-roll, and it's kind of ingenious. What basically happens is this: Raymond Felton dribbles to one side of the court, sort of where Anthony typically isolates on the baseline. Then Anthony comes over and pretends he's scoping out room for an isolation. He and his defender lock up and battle for position, and it seems as if Felton is just waiting for an opportunity to pass him the ball. But then he doesn't and Anthony gets closer. So close, in fact, that woah it's a pick-and-roll. 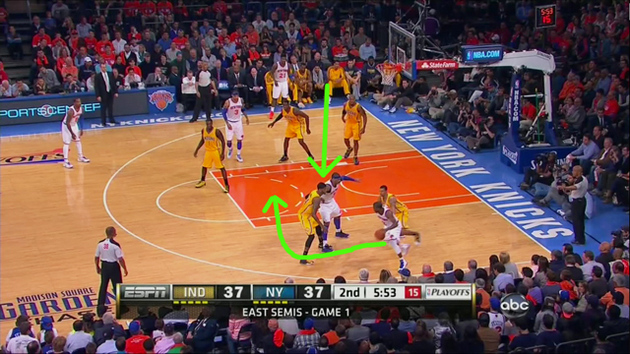 (Yes, yes, Hibbert isn't in the game. But Mahinmi abides by the same defensive principles as Hibbert.)

Paul George - Anthony's defender in this case - is attached to Anthony at the hip. As with most Anthony defenders, he starts to body up when he senses an isolation coming. But as Felton begins to dribble around Anthony, George essentially widens the pick. Why? He's literally too tangled/concerned with Anthony. And by the time he figures out what's going on, it's too late. He's already accidentally impeded George Hill's path and given Felton room to penetrate. Unlike a typical pick-and-roll, this play has rendered two defenders moot. 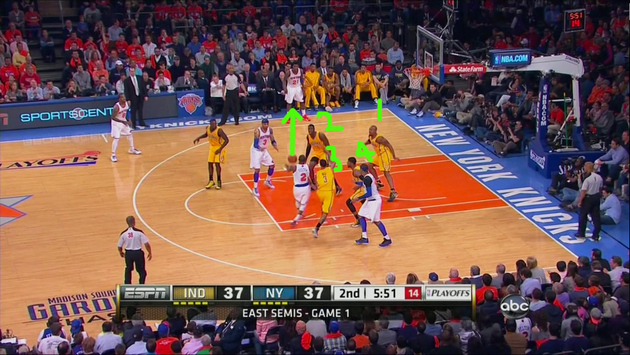 David West and Ian Manhinmi both get sucked into the paint to prevent a layup now that Felton has essentially blown by two players. He then kicks it to Shump, who knows down the three.

Here it is again. Anthony fakes the isolation and sets a pick instead, turning George into an accidental pick setter (again). Felton exploits the seam and gets into the lane, drawing Tyler Hansbrough's semi-help. 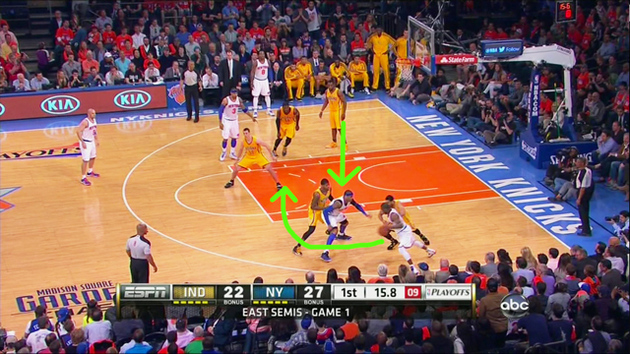 Kenyon Martin, who's amazing at the little things, turns and sets a screen on Hansbrough, cutting him off from recovering to his man (Jason Kidd). Felton then kicks it right to Kidd for the open shot.

Oh, and there's more. See how Roy Hibbert camps out in the paint once he sees the pick-and-roll coming? This frees up Martin to do as he pleases on the perimeter. Without anyone guarding him, Martin's essentially becomes an unaccounted for fullback. Hibbert's presence down low is used against him. 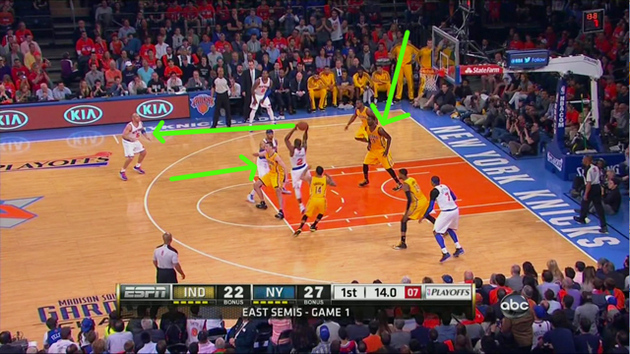 Kidd unfortunately hesitates, and then takes a weird contested three instead. But both the concept and execution of the play (up until the Kidd) are quite nice.

Oh, wait! We've run this play before! In crunch time of Game 6 against the Celtics the other day. Except that time Brandon Bass, Anthony's defender, sniffed it out and was in a proper help position. Too bad the brief opening allowed Felton to suck in both Bradley and Bass, and Melo was wide open on the pop for a clutch three-pointer.

A Lesson In History

Yeah: Hibbert did the exact same thing to LeBron James and Dwyane Wade last year in the Eastern Conference Semis. Indiana was even winning that series 2-1, holding Miami to 95, 75, and 75 points in the first three games. But starting in Game 4, LeBron smartened up and Miami reeled off games of 101, 115 and 105 points. So how did they turn it around?

Adjustments! In Games 1-3, Miami tried three things: 1) Barrel through Roy Hibbert. 2) Pull up in the mid-range area. 3) Float a bunch of floaters. Sound familiar? All of this, as New York just found out, will eventually fail; it's not sustainable in the long-term. So what adjustments did Miami make?

Roy Hibbert's biggest liability is his lack of speed. He camps out down low to make up for this, but often that leaves the man he's guarding to do as he pleases - which is to say that he's a completely free screener ready and able to knock somebody off their spot without any help defense. (I touched on this before with the Martin screen on Hansbrough.)

On this play from Game 4 last year, LeBron comes off a double screen to catch the ball moving towards the top of the key. As a secondary action, Joel Anthony, one of the double screeners, turns and sets a pindown on George Hill for Mario Chalmers, the other double screener. 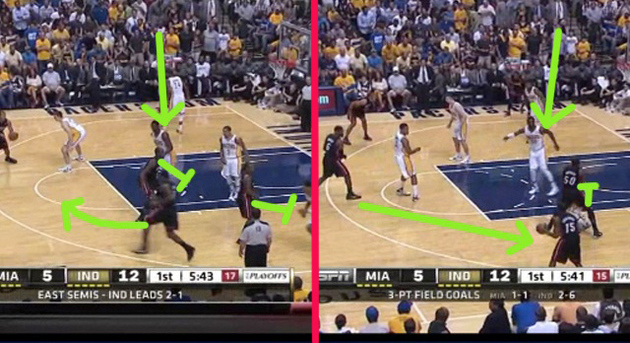 Anthony hits Paul George hard; Roy Hibbert, who is *guarding* Anthony, is nowhere near the play. Therefore there is absolutely no help when the screen is set, and Chalmers is wide open for the three-pointer.

The Knicks did a little bit of this with some Anthony spot-ups and that corner Felton jumper play, but not nearly enough.

If a part of what troubles Hibbert is his lack of speed, then his ability to recognize plays and position himself accordingly is undoubtedly his greatest strength. Basically he knows when to camp out and sniffs out plays before they've even developed. It's why he's already backpedaling on most pick and rolls: he knows where things are going to end up, so he gives himself a slight advantage by getting started on the positioning early.

The easiest way to get Hibbert out of this rhythm is to muddle things up a bit with lots of movement. Don't let him pre-diagnose things with consistently simplistic action. Creativity!

Like this play from Game 5 - the very first play of the game - which, frankly, is a Photoshopping nightmare. There are too many moving parts to succinctly catalog everything, so I'm only giving you video. But the basic idea is this: there are so many screens and cuts and movement and general organized chaos that Hibbert has a hard time tracking where his main help should be. (Watch his head spinning and pointing.) By the time LeBron gets in a side pick and roll, Hibbert's a little too far from the hoop. This forces David West to creep in just a bit too much, and leaves Shane Battier wide open for a corner three.

Obvious, I know. But it took three playoff games for LeBron James and Dwyane Wade to stop mercilessly attacking Hibbert. The Knicks are going to have to accept that layups are not going to be easy to come by in this series. If they want easier opportunities at the hoop, they're going to have to push the ball out in transition more, hit some backdoor cuts, and generally attack the hoop when Roy Hibbert isn't ready and waiting. It's an uncomfortable truth to handle, that a defense (well, player) does something so damn well and can take away a strength of the Knicks. But what it can do, if manipulated right, is open up something we haven't seen out of this team in these playoffs: three-point shooting. And we're good at that, right?