The Knicks embarrassed themselves in Game 1, which begs the question: who was your favorite "In Living Color" cast member?

Share All sharing options for: Farewell to the Middle Kingdom Previews: Game 2

I have never experienced a more overwhelming sense of terror than I felt the day of Jan. 6, 2007, the day I left America for good. Waves of sheer panic bombarded every nerve ending in my body - that feeling of paralysis, and my empty stomach, were the only things stopping me from heaving my guts out. My father drove me to Newark Airport - I couldn't have driven even if I had wanted to. My mother sat in the back seat with a magazine. Oh my God, this is really happening. I'm really leaving my family...for who who knows how long. I should say something. What should I say.

The only thing that came to mind at the time was the New York Knicks, so that's what we talked about. They had won the night before, beating Ray Allen and the Seattle Supersonics 111-93. Sure, they has struggled out of the gate that season - of course - but they seemed to have righted the ship in December. They had just won their second game of a five-game West Coast road trip, which was huuuge for those Knicks teams. They had Renaldo Balkman! If they could only keep up this momentum, hopefully not do anything stupid at the trade deadline, they might be able to surge into the eighth seed in a weak Eastern Conference. Wouldn't that be something...

Fast forward to May, 2013 - this time, I'm leaving China for good. I'm older, fatter, significantly more married. The Knicks are playing in the second round of the Eastern Conference playoffs. The Sonics ceased to exist, almost came back into existence, and recently re-ceased to exist. But I'm still talking Knicks to anyone who will listen. the Knicks once again will play a game the day before my big move. Another win would be nice, fellas.

Much of the chatter leading up to Game 2 has been focused on the return of Amar'e Stoudemire. How is he looking in practice? How many minutes can he play in this series? How will Mike Woodson work him into the rotation? Who should he pair with in the front-court? Can he help lure Roy Hibbert into foul trouble?

So many questions - let me answer them all in turn:

I find this pre-Game-2 obsession with a player who definitely won't play in Game 2 a wee bit disturbing. Have we learned nothing from the Chicago Bulls? Are they sweating the return of Derrick Rose? Or Luol Deng? Or Kirk Hinrich? Hell No! Did all those buff, oiled-up Spartans wait for reinforcements before taking on the Persian army of zombie ninjas and super-rhinos with nipple rings in the totally historically-accurate film 300? No way, bro! Did the German army wait for reinforcements when they bombed Pearl Harbor? Isn't that the quote from Animal House? I'm not quite sure (I've always been more of a PCU guy myself. Gutter is a tool!)

There is certainly a time and place to discuss STAT's return to the lineup, and this ain't it. There are very real adjustments that the current Knick players and coaches need to make, like immediately.

My esteemed colleague (and assumed fellow Irishman) Dylan Murphy covered the Roy Hibbert effect way better than I ever could. The only thing I have is this: the Knicks are playing the Pacers in the playoffs and I'm rooting against the center from Georgetown? That's gonna take some getting used to.

Hibbert was a beast, no doubt, but I don't believe he was the key to the game - after all, the Knicks did score 95 points in Game 1. How many points is that? Consider:

The Knicks were handed a surefire recipe for victory in this game on one end of the floor, and then dropped a big steaming dookie into the mix with their poor effort on the defensive end. The defensive collapse can't be blamed on one player - six of the seven top Pacer regulars scored above their regular-season averages in this game, the lone exception being poor old George Hill, who averaged 14.2 PPG in the regular season but only scored 14 against the vaunted Knick D.

Instead of relying exclusively on Paul George and David West, the Pacers played the kind of team-oriented, spread-the-wealth offense the Knicks have only been able to muster for 12-minutes stretches during the postseason. On defense, the Knicks responded by essentially guarding no one - 14 of the 24 jumpers the Pacers took during the game were unguarded, according to Chris Herring. Tyson Chandler's steady improvement during the Boston series evaporated against the Pacers. In fact, the whole ordeal made me question just what we were seeing against Boston - despite the low scores, the Knicks did seem to be giving the Celtics too many open looks. The Pacers made them pay for those open looks in Game 1, and now the Knicks can either hope their shooters cool off, or they could, I dunno, actually cover them.

What can the Knicks do to improve on D in Game 2? For starters, let's cover D.J. Augustin, shall we? He tied his season-high for three-pointers in Game 1, with four, and his 16 points were only two off his season-high.

The Knicks were beat down on the boards in Game 1, not so much by Hibbert and West, but by guard Lance Stephenson. Stephenson - the quintessential New York kid bypassed by the Knicks in the draft and out for vengeance - played the kind of game Iman Shumpert had been playing against Boston (11 points/13 rebounds). The Knicks are already at a disadvantage on the front-line in this series, but I had hoped that their stable of quality rebounding guards could mitigate that somewhat. Didn't happen. Guys like Stephenson and Augustin aren't scrubs, but the success they enjoyed in Game 1 is evidence that the Knicks weren't stopping anybody. That has to change...today.

And that's all for the Middle Kingdom Previews. Let me leave you with one final parting gift from China: a nice, cold can of The Jew's Ear Juice. 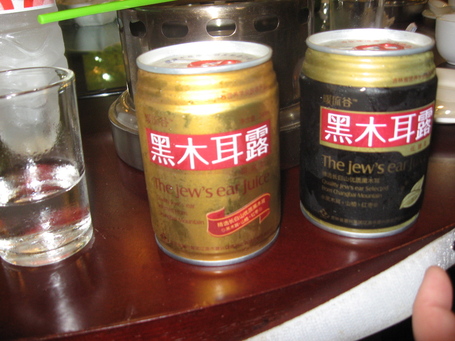 Buddha-willing, the Knicks will give me a fine going-away present, and I will arrive back in the USA with the series knotted at a game piece. Let's Go Knicks!