How the Knicks made mismatches work for them in Game 2.

Share All sharing options for: KnicksTape: The Cross-Match Advantage

Hey, the offense! In Game 2, Carmelo Anthony only challenged Roy Hibbert directly at the rim on two occasions, and J.R. Smith once. Bad shots were at a minimum. Good shots were at a maximum. Quentin Richardson head bopped! Things went well. But, why?

Everyone touched the ball. It's really that simple. The Knicks were feeling pass happy. Most importantly, Carmelo Anthony was pass happy.

Late in the 1st quarter, when the Knicks really built their early lead, Carmelo Anthony started to run a bunch of pick and rolls with Tyson Chandler. Though Melo is dangerous in these sets, it often entices him to over-shoot the ball - especially with Roy Hibbert dropping back to the hoop on these plays. Except last night Melo exhibited quite the pleasant change of pace: he passed (!) the ball.

But it's more than passing, or even making the right passes; it's leveraging the cross-match to New York's advantage. The basic concept is this: because Indiana chooses to hide David West on a smaller player and stick Paul George on Melo, Frank Vogel is taking the chance that the Knicks won't be able to exploit West. In part, Vogel has Woodson out-gameplanned here: Woodson isn't going to isolate Shumpert or Kidd or whoever else not named Carmelo Anthony or J.R. Smith against David West because, well, that would be a horrible idea. What Vogel risked, then, was that West wouldn't flounder too badly covering shooters. In Game 1, he mostly didn't. But in Game 2, the more frequent Anthony-as-ball-handler pick-and-rolls caught West with his pants down.

Okay, pictures: check out Melo as he heads towards the rim here. David West, guarding Jason Kidd, is plenty close to recover on the kick out. No problems here. 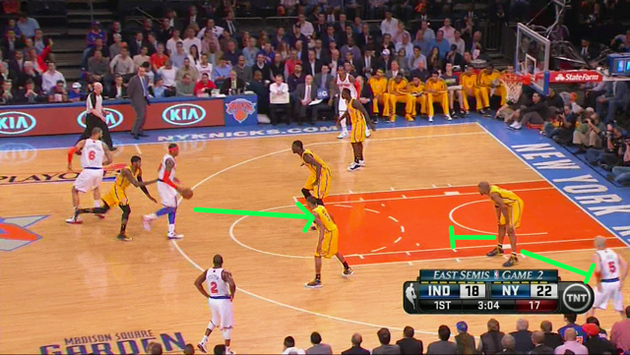 But as Melo attacks the paint, West slides further to the hoop. Remember that he's a big man, and his most natural instinct is protect the rim. Except due to the Knicks' small ball lineup and Melo's mismatch-creating self, he's on a shooter. His responsibility, as we heard Vogel tell Rachel Nichols at the first quarter break, was to protect the three-point line. Melo, dangerous penetrator that he is, sucks West right in. 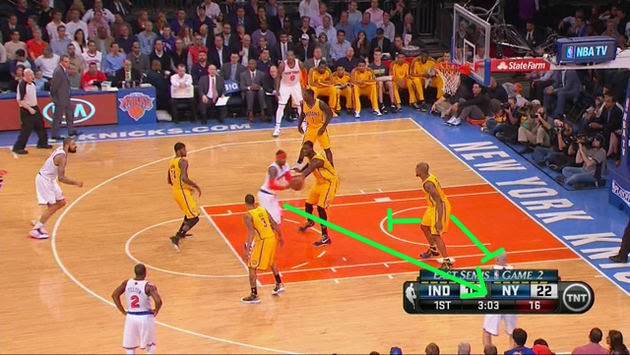 Except unlike Game 1, Anthony actually kicks the ball out to Kidd for an open three.

That's where the cross-match works - spreading West out and countering his most basic basketball principles with a new directive. Even though the Kidd three misses, the concept succeeds.

In this next example, the cross-match gobbles up George Hill. Not in the traditional sense, in that he's guarding someone he shouldn't be. He's still on Raymond Felton, which is mostly certainly size and matchup appropriate. What changes - due to putting a power forward in the pick-and-roll - is George Hill's location on the floor. Raymond Felton, as you can see, now becomes one of the corner shooters instead of the pick-and-roll ball handler. 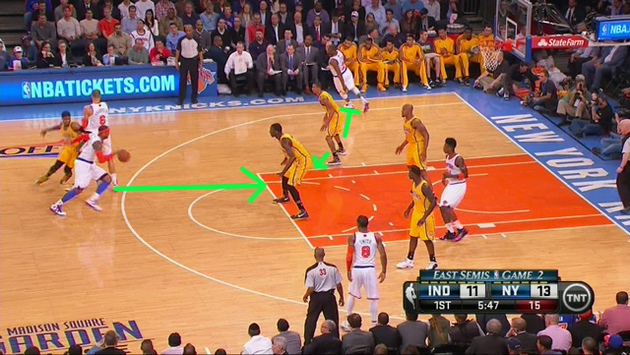 After Game 1, when Mike Woodson ran George Hill through countless pick-and-rolls as the on-ball defender, and an entire season of basketball when he defended other point guards doing similar pick-and-roll things, we can safely assume Hill is most comfortable in this role. Felton as shooter, however, alters his responsibilities, and with New York's three-point heavy attack forcing Indiana to mostly stay at home on shooters, wires can get criss-crossed. That's what we have here.

After Felton hands the ball to Melo, he clears out to the left corner. Meanwhile, Hill is keeping an eye on the pick and roll developing in the middle of the floor.

Chandler starts to roll to the rim. Melo attacks. Felton hangs out in the corner. There are three offensive players, two of whom are rumbling right towards Hill, in his vicinity. For a split-second, he drifts towards the middle of the paint; Melo helps facilitate this by leaning towards the right side of court. 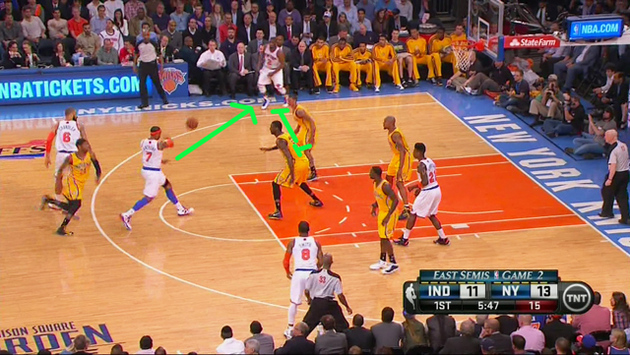 But then Melo slings a pass to Felton, who's by now ready to catch and shoot, before Hill can recover. This time, three points for New York.

So when the Pacers actually do their jobs and stay at home, what we're left with is this: Carmelo Anthony, in space at mid-range. Why not shoot the ball? 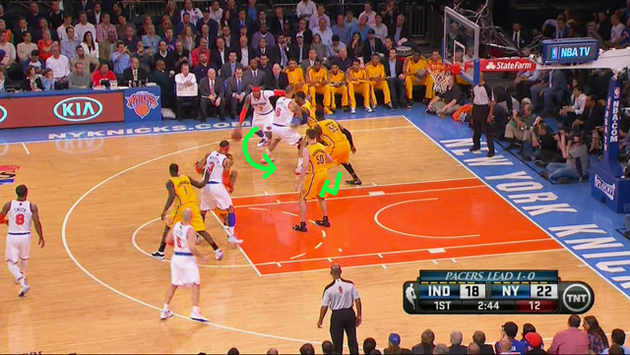 Sure, the Pacers want this. Frank Vogel wants New York to live in the mid-range. Indiana's defense is so effective because, for the most part, they're able to corral things in that inefficient space of the floor. If the Knicks hope to keep Hibbert and other perimeter defenders honest, they're going to have to make some of those shots. And if those shots are going to be there, it might as well be Melo taking them. 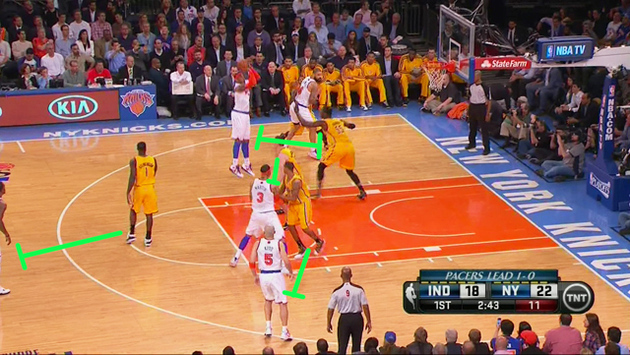 Just look at the space here. Hibbert's hand barely goes up. The other Pacers are completely stationary and stuck on their men. And even so: if this is any other player on the team pulling up, it's a probable ugh. But if it's Melo, fine. Good, even. Here's where pulling up is the right decision.

What About The Defense?

There's another part of the game the Knicks play, and apparently it's sometimes optional, especially in the first half. Last night was no exception. What was so striking, beyond the ball going in the bucket and Reggie Miller quietly cackling the ugliest cackle, was that they were largely communication failures.

1) Take this Pablo Prigioni double team on Roy Hibbert. For all his wonderful Pablo-ness yesterday, he really dropped the ball on this one. The first problem: notice how he doubles David West off George Hill even though West can clearly see him coming. 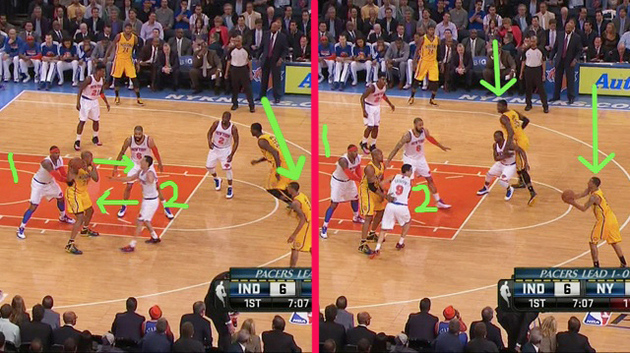 What's possibly worse is that Prigioni never gives any hint of his intentions to his teammates. Felton, who's about to be nudged by Roy Hibbert, has no idea he'll need to rotate and cover for Prigioni. Couple that with West's ample time to assess his options because Prigioni was very un-secret agent here, and West is able to dump the ball back out to Hill for a wide open three.

2) Alright, alright, Melo wasn't perfect. He did have to play defense, and that didn't go so well. Most of his problems came on the help side of things, namely the talking. Or, lack thereof. Paul George caught him multiple times on backdoor cuts, and other players were screened open because Melo didn't communicate or help. Here are two examples of this:

(Don't worry, all the Photoshopped arrows are inside the video!)

Defense, obviously (Melo started recognizing backdoor cuts!), but it's a bit more than that. In his piece yesterday on Grantland, Zach Lowe touched on the other half of the cross-match problem: transition. If the Knicks are able to push the pace a bit, the Pacers could be scrambling to figure out who's got whom. Remember, this isn't an I-got-you-you-got-me deal; the Pacers aren't standing next to their assignments when the play switches from offense to defense. (You might say that this would be a problem for the Knicks the other way, but remember that NYK has no problem sticking Jason Kidd or another guard or a bigger wing player. Think Ray Felton on Paul Pierce in the first round series.) And especially in a transition situation, when the only objective is to prevent an easy bucket, defenders tend to guard who's closest. The result, then, is either a bucket amidst the confusion or a mismatch in the half-court for Carmelo Anthony.

When the Knicks went on their gigantic run in the 3rd and 4th quarter, the latter half of the cross-match problem was exacerbated by this exact issue. The Knicks started playing defense. With that defense came missed shots. With missed shots came transition. With transition came matchup scrambling and other issues.

1) Here we have the Knicks grabbing a rebound off a miss, and Prigioni walking the ball up the floor. Except for whatever reason, Paul George indicates to David West to pick up Carmelo Anthony. Due to the cross-matching the entire game, this isn't an assignment West is used to. He's been stuck on the likes of Jason Kidd, among other people. 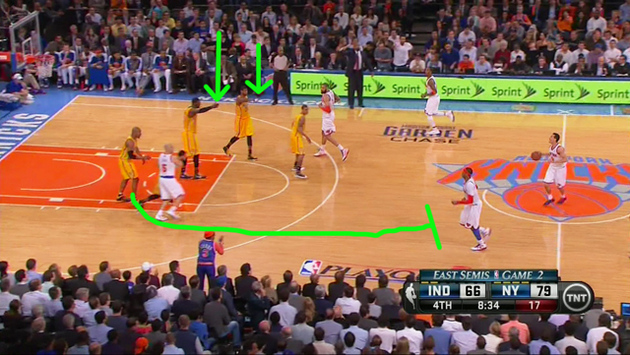 Except West momentarily brain farts, forgetting that this is Carmelo Anthony, and gives him room to breathe. Prigioni then just fires a quick pass to Melo, who pulls the trigger on a three before West can unfart and contest the shot.

2) Here's a more clear cut example. On the rebound, Prigioni races the ball up the floor. The Pacers get back, but everyone's on the wrong person. D.J. Augustin, as you can see, is on Carmelo Anthony. Eventually Hibbert and Augustin switch to even things out a bit, but it's still all messed up. Roy Hibbert should not be guarding Carmelo Anthony. 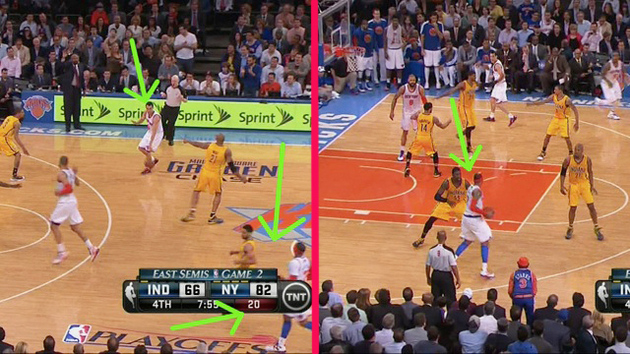 Anthony immediately takes him off the dribble and gets to the rim. And since it's Roy Hibbert guarding him, no one's there to properly box out Tyson Chandler, who slams it home the miss for the putback dunk.

3) And a third time, it happens again. J.R. Smith pushes the ball in transition, leading to an open Kidd three. Kidd misses. Smith, however, grabs the offensive board, and the Pacers scramble to get matched up. But at the crucial moment, when either George Hill or Paul George can run to cover Carmelo Anthony (leaving the other on Kidd), it's Hill who goes. 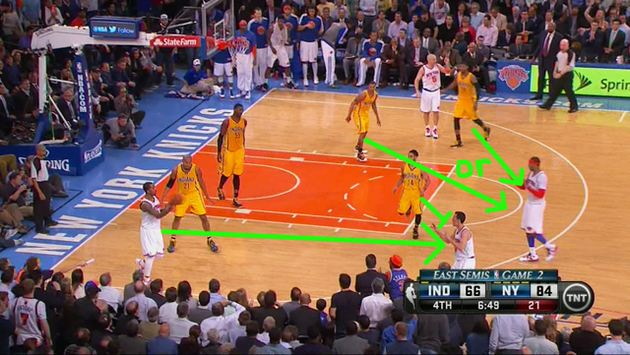 The ball eventually swings to Anthony in the post against Hill, who has absolutely no chance. 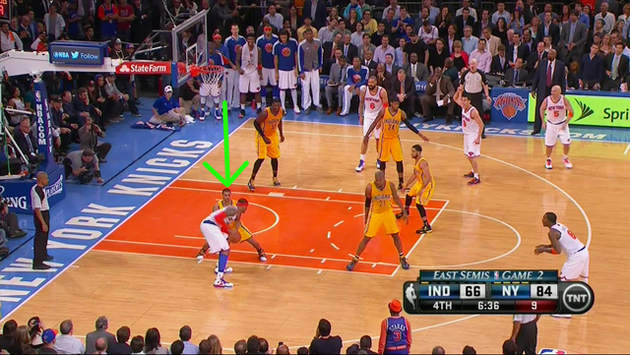 He tries to hack Anthony as he turns middle, but it's to no avail. Anthony sinks the and-one.

And lastly, just for kicks. Remember that whole free screener deal I mentioned in the last KnicksTape that might be worth attacking? Throughout the game, and in particular during the run, the Knicks took advantage of this. Hibbert, as per usual, camped out under the hoop. Except in Game 2, Tyson Chandler was more active as a screener, such as this play below. 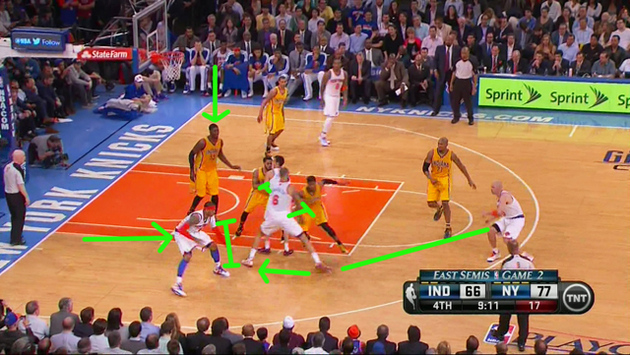 And so the Knicks won, big. Every problem that the cross-match presents defensively for the Pacers (thanks to Melo's versatility as a power forward) came to fruition, and New York really took advantage. Here's to more of that in Game 3.