A close look at the tendencies of some standout SummerKnicks.

There was only so much we could learn about the SummerKnicks at Summer League. Practices were few, players were all trying to get theirs and the sample size was microscopic. But if we throw out the box score and watch technique and composure, there's a lot to be understood about player tendencies.

I'll focus for now on C.J. Leslie, Jeremy Tyler and Toure' Murry - all of whom have at least reportedly received invites to training camp - because they were among the most impressive SummerKnicks.

Much of C.J. Leslie's game is predicated on his length and athleticism. At nearly 6-9 and with a 7-2 wingspan, Leslie tends to glide over and around his opponents with relative ease. On the glass, his ability to second jump (think Carmelo Anthony driving and grabbing the offensive board immediately) is simply outstanding. As a competent dribbler with above average body control, he's able to wield his frame in a way most other players can't - his takeoff point to the rim is much farther out without a loss in explosion. In transition this is particularly helpful, because Leslie is able to attack gaps and put defenders on his hip, often creating contact for a foul or an easy finish as the defense lags behind. The latter happens here:

On a Knicks team that generally lacks transition speed, a player like Leslie can stretch the defense and create space on the secondary break for a trailing big or wing shooter. In the half-court, however, Leslie doesn't temper this style of aggression. As an explosion dribbler (someone who relies on a strong and quick first step to blow by defenders but is unable to redirect with secondary dribbles or moves), Leslie is prone to driving to the rim without a backup plan. He therefore gets caught in mid-air a bit too often, leading to turnovers or awkward shots or some other type of mishap.

On this play against the New Orleans Pelicans, Leslie drives to the rim from the left wing. Notice from where on the floor he begins his drive: 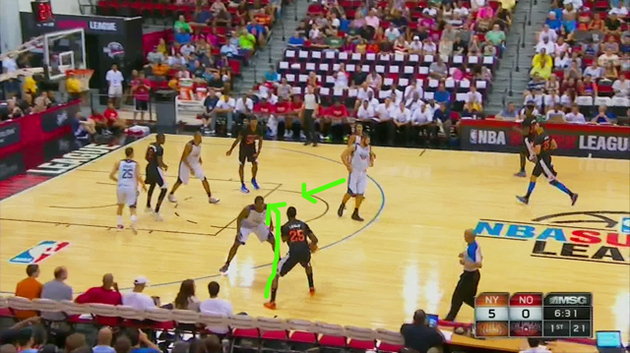 As Jon Brockman sticks a hand in, Leslie loses control of the ball. Remember, he's a string bean. He doesn't have the strongest hands when protecting the ball, and instead relies on his size to keep it out of the defender's reach. Here, Brockman's pinching in slightly knocks it loose: 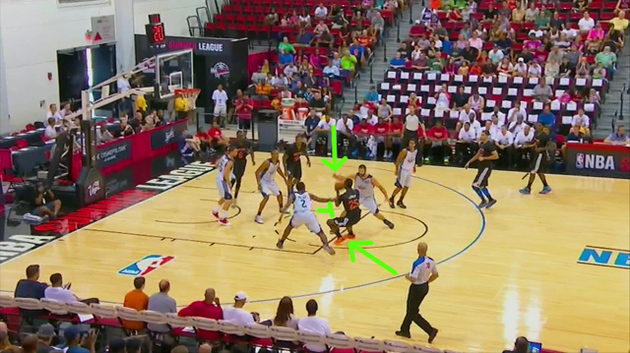 Now look where Leslie is: the free throw line. Without secondary dribbling moves, Leslie relies on his first step explosion to propel him by the defense. His final ball decision, whether it be a pass or shot, must come after one or two dribbles. While this is not necessarily a problem at the rim because he's often in a position to draw contact, it creates a lot of mid-air decision-making away from the hoop. Once he reaches the free throw line on this play, he's toast: pull-up jumpers aren't his style, and he's caught in the air with hands poking at the ball. The result is a deflected pass.

Or here, in transition, when some resistance on the way to the bucket forces him into an awkward side step, leaving him well short of the rim. Left with nothing else to do other than shoot, Leslie's lame duck scoop shot is swatted.

What's important to realize about Leslie's game in this respect is that it isn't a skill-set flaw. Outside of LeBron James and Kevin Durant, there aren't too many 6-9 players that can adeptly maneuver with the ball after a straight-line drive fails. The fix here is tactical; a deeper understanding of his skill set can wipe away these ball-decision issues. Should Leslie start his drives closer to the basket, he won't even need secondary dribble moves.

Here Leslie catches the ball in the post. This time, he's much closer to the hoop to start out with. And when he initiates his final two-step push towards the rim, look where he ends up: 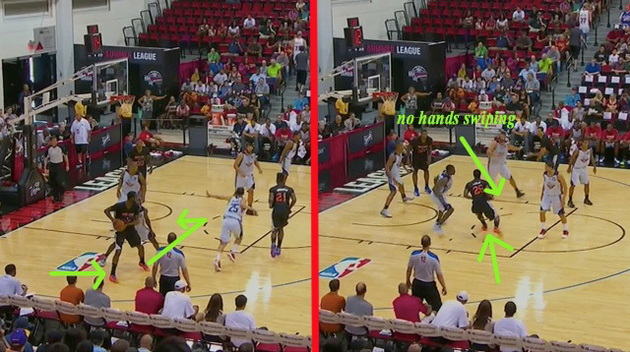 Smack in the middle of the paint. He's very dangerous in that position, and is able to draw his defender in the air with a smooth up and under. There aren't any perimeter hands poking at the ball, and he's able to gather after the one-two without pressure.

Yet throughout Summer League, Leslie fancied himself a point guard and couldn't help but initiate the offense, whether his own or the team's, from the perimeter. If he ever wants to become a more consistent offensive threat in the NBA, he'll need to examine his mental approach to that side of the ball.

Jeremy Tyler was a monster on the offensive glass during Summer League, at times a man among boys. When he chose to throw his weight around on the glass, he was a devastating force. But on other areas of the floor, he didn't utilize his massive frame to his advantage. Particularly during half-court sets when he was trying to establish position in the post, Tyler was out-muscled and pushed around.

On the left is Tyler's position as he initially battles with Josh Owens on the left block. On the right is where he's looking for the ball only moments later. 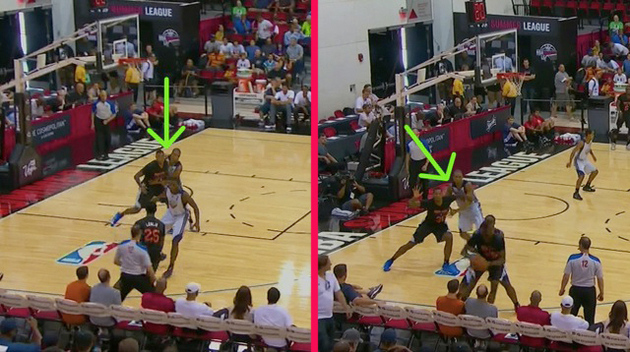 As you'll see in the video, he simply got moved off his spot to the point that CJ Leslie doesn't even attempt to enter the ball.

On another such play against Jon Brockman, Tyler starts out at the second hash mark. By the time he catches the ball, he's been shoved all the way to the baseline and 15 feet away from the hoop. 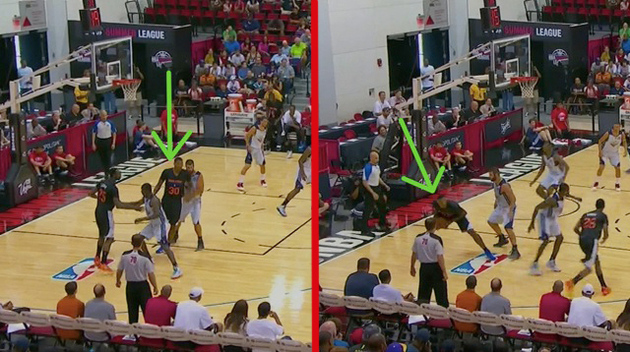 Here it is at full speed:

So, why? How do we know it's not just a matter of strength? Take a look at how Tyler leverages his body in the post in that first example against Jon Owens: 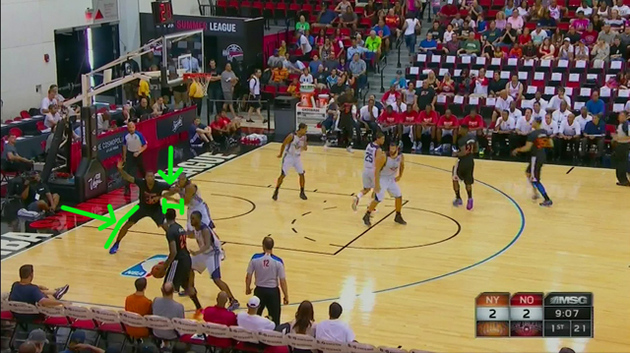 His back, instead of his knees, are bent. This redistributes the resistance from Tyler's quads to his knees and ankles, which, as with any human being, are considerably weaker. So when Owens gives him a little shove, Tyler can't help but slide a few steps further from the rim. He also hasn't angled his body into Brockman, and therefore does not carve out any space for the entry pass. Instead, he sticks a hand out and relies on his other arm to fend off Owens' entire body weight (which doesn't work, obviously). In order to ensure that Owens doesn't deflect the ball when it comes, Tyler would have been forced to jump out to meet the ball, meaning he loses even more precious ground.

Position is 80 percent of the battle when it comes to post-ups. What makes Dwight Howard so devastating isn't his immense skill; it's his ability to create seals only feet from the rim, allowing for an easy drop step and dunk. If an offensive player can catch the ball within six feet of the rim with the defender pinned behind his back, the battle's won before it's even started - a quality look is almost guaranteed. Throughout Summer League, Tyler lost the position battle.

In some sense, Tyler's post positioning issues aren't dissimilar from C.J. Leslie's most glaring problem: their offensive initiation points force their offensive games to overextend. In Tyler's case, his post moves become too complicated. Check out how another lost positioning battle against Jon Brockman ends:

When Tyler's drive baseline is cut off, he tries to spin back middle and re-seal Brockman that way. Instead, he nails Brockman in the chest with a lowered shoulder and earns himself an offensive foul. In the second example, that same spin move lead to an awkward gather and hook shot that only hit the backboard. Tyler used this spin quite often during Summer League, and only a few times did it lead to an easy finish or dunk. At this point in his career, it is simply not refined enough for its consistent usage. He was much more effective when relying on drop steps or hooks, moves that require power and quickness over fluidity and dexterity. But remember, he's 22 years old. As a long-term project, he's certainly worth a look for a roster spot.

What stood out about Toure' Murry was that he didn't. In a week of basketball that helped players recede into their most selfish selves, Murry managed to remain under control. He rarely took bad shots; he didn't over-push the ball on the fast break; he moved at a slower pace and rationed out his explosion for moments when it was needed.

Sure, there was that nifty behind-the-back-pass, but for the most part Murry impressed by displaying poise. See here, when he has a chance to challenge a defender early in the shot clock in a one-on-one opportunity, but doesn't.

And that's it, really: he plays within himself. Make some three-pointers, run a bit of pick-and-roll, don't do too much. Murry isn't an explosive scorer or devastating shooter or wonderful ball-handler. He was an average offensive player at Summer League. But plays like the one above stood out because Murry didn't succumb to the 100mph rate of operations at Summer League.

The other side of the ball is where Murry excels, and it showed. Though he did foul too much and might have been a touch over-aggressive, his defensive instincts, particularly in one-on-one situations and extended ball pressure, were superb.

You might remember that Pablo Prigioni did much of the same throughout this past season. By nagging ball-handlers all the way up the floor, he ate away at the shot clock and prevented opposing offenses from initiating offensive sets quickly. The downside of such pressure is allowing the ball-handler to slip by, thus creating a five-on-four. Murry, at times, was guilty of this:

But the large majority of his ball pressures were effective and disruptive because he stayed disciplined in his defensive principles - most simply, forcing the the ball to the opponent's weak hand. Good defenders stay in front of their man; great defenders dictate their man's ball direction. Murry made a consistent effort throughout Summer League at the latter.

On this play he does just that, pressuring New Orleans guard Will Cherry all the way up the floor. 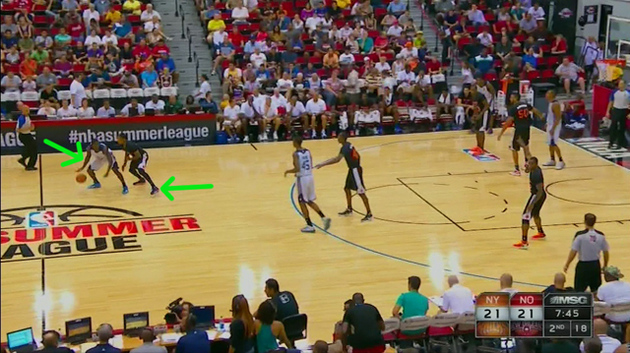 But as Cherry has the ball in his right hand after a spin move to create space, Murry finds himself on Cherry's left. Instead of backing off now that the ball has crossed half court, Murry flips his stance to force a Cherry crossover, which in turn puts the ball in his weak hand. 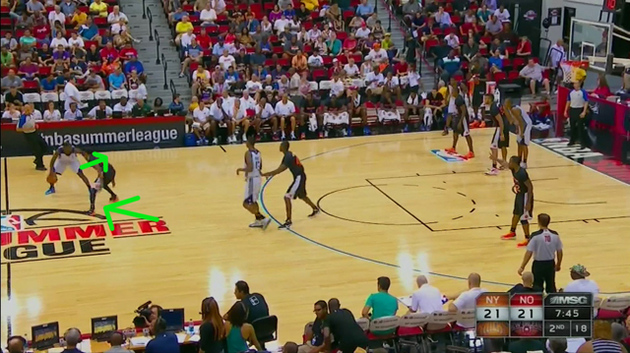 When a big man comes to screen for Cherry, he must now cross back left to right. All that extra time Cherry spends crossing and re-crossing - both to put the ball in his dominant hand and to create and re-create space - waste 10 seconds off the shot clock. By the time Cherry finally moves the ball to a teammate, over half the shot clock has disappeared.

With three roster spots still open, we can probably expect at least one of the SummerKnicks to sneak onto the team. Still, none of them appear ready to contribute in any meaningful way. But if we're keeping an eye on the bigger picture, there's definitely some skill to work with here.