J.R.'s back, and he's got more than just scoring to offer.

Share All sharing options for: KnicksTape: In Defense Of J.R. Smith, Literally

Look: the playoffs were what they were. J.R. Smith was awful, and the Knicks lost to a Pacers team that proved its chops against Miami. But thanks to Early Bird Rights and giant, cap-restrictive contracts with a vice grip on the Knicks' financial flexibility, it's J.R. Smith or nothing, now. And so the obvious choice, it would seem, is J.R. Smith.

Which means: more awful shot selection. What's worse about Smith, though, isn't necessarily the just-inside-the-arc step-backs and contested twos. It's that Smith is a worse player by conscious choice. Should he choose not to take those shots, and instead stick with open jumpers and drives to the rim, he's one of the more devastating offensive forces in the league. He's arguably a better passer off the bounce than Carmelo Anthony; he finishes at the rim with regularity; he's one of the Knicks' best spot-up shooters. There's a lot to like here.

And then there's his defense. There's A LOT to like here, too. Even though his Sixth Man of the Year award hinged on his offensive performance, Smith became a sort of defensive everyman. In a switch-heavy defense that often featured defensive mismatches in favor of hedge-and-recover confusion, Smith was called upon to guard multiple positions. On a team that often featured slow-footed big men (and therefore late rotations), Smith was the one covering up mistakes. And with Amar'e Stoudemire's looming return to the lineup, presumably to the second unit, Smith's defense is that much more valuable.

It's not always prudent to play help defense. Often there's a big man patrolling the paint that's in better position, and leaving shooters to prevent contested floaters can have frustrating consequences. J.R. Smith - at least in this year's playoffs - had a keen understanding of his responsibility as a function of the man he was guarding.

1) Here, Paul Pierce drives the lane, drawing Raymond Felton's help off Avery Bradley on the left wing. J.R. Smith, as you can see below, is left to fend against two shooters. Should he rotate to cover Bradley, he's leaving Jeff Green wide open for a corner three or backdoor cut. 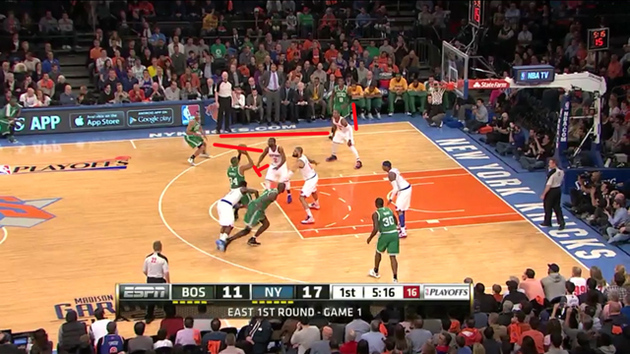 The more prudent play, then, would be to stay put. Pierce kicks the ball to Bradley, who now has it a step inside the three-point line. Again, here's where thinking is good: long, uncontested two-pointer for Avery Bradley, or uncontested three-pointer for Jeff Green. The choice seems obvious, but while playing basketball, it's not always that easy: it can be difficult, mentally, to just leave a guy wide open. Smith, however, remains patient. He lunges slightly towards Bradley, as if he's going to give help, but scampers back to Green instead. Felton, meanwhile, only partially recovers. 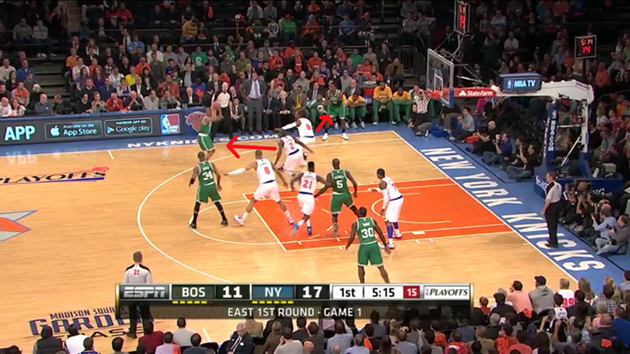 Smith's lack of overreaction is everything here: his hesitance to leave Green, even to cover a wide open Avery Bradley, pays off. The Knicks will live with an Avery Bradley long two one hundred times over.

2) Here's the flip side of that situation. This time Avery Bradley is driving off a pick-and-roll, and no Knick steps up to help. Kenyon Martin is on the wrong side of Kevin Garnett's roll; Raymond Felton is in a trail position. It's all up to J.R. Smith to close down the space and defend the paint. 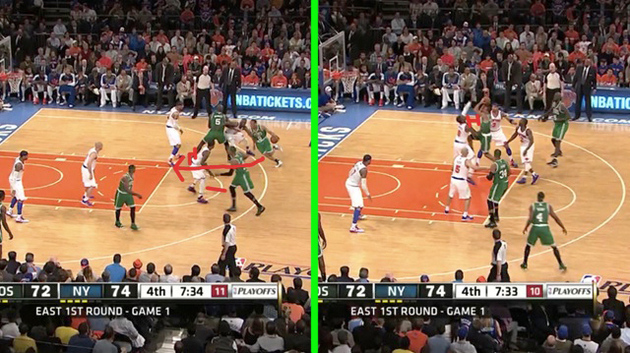 And he does, masterfully. Bradley, thinking that he's about to slice down the lane uncontested, picks up his dribble as he moves towards the hoop. Smith, however, rotates all the way over without fouling and forces a turnover.

Help defense is a more direct prevention of buckets. See man with ball, step in front of man with ball. Rotations on the weak side, however, often prevent plays before they can even develop. Particularly in the Knicks' switch-heavy scheme, it's incumbent upon one person - typically a guard - to scramble to find the right man.

1) On this play, Kevin Garnett finds himself posting up on Iman Shumpert after some switching. Carmelo Anthony slides over with the most useless help rotation ever, leaving Brandon Bass wide open under the hoop without actually providing any protection for Shumpert. (If you're going to double, double.) This forces Smith to quickly react and put a body on the much bigger Bass. 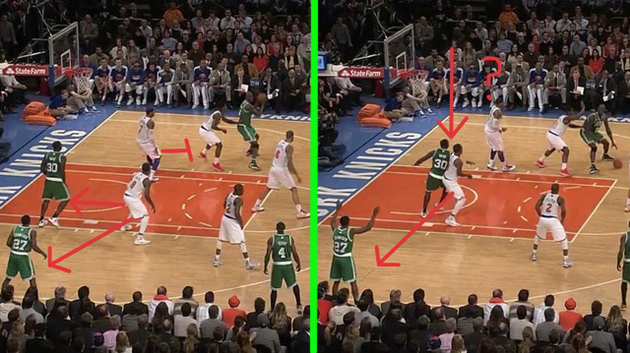 Bass, as the video will show, senses the opportunity for a lob entry and tries to seal off Smith and create a lane to dump the ball in. But Smith sniffs out the danger before Garnett can capitalize, bumping Bass just enough to make that not worth Boston's while.

The rotation, however, leaves Jordan Crawford wide open in the corner - J.R. Smith's previous man - and Garnett finds him. Smith then peels off Bass, closes out on Crawford with choppy steps to discourage a blow by, and contests his three-pointer as the shot clock expires. 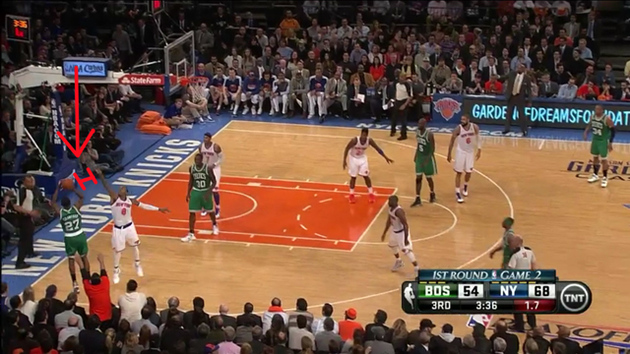 (See the first play of this post for another example of Smith's weak side awesomeness.)

Smith loves to patrol passing lanes and gamble for steals, yet it's usually a well-calculated risk. He isn't just gambling for fast-break dunks; he's leveraging the scoring potential of his man against the possibility of stealing the ball, and most often he's right.

1) On this play, Kevin Garnett earns deep post position against Kenyon Martin. Brandon Bass, who has the ball on the perimeter, keys in on this matchup.

Smith, as you can see here, begins to stalk the matchup. Very animal-like, actually. He slowly creeps towards the duo in the paint, waiting for Bass to dump the ball in. Just look at those eyes: 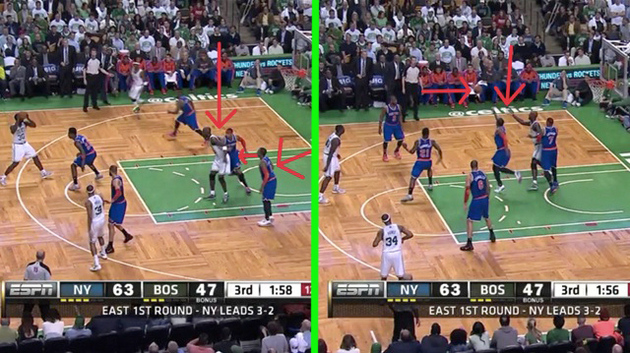 Bass throws the pass; Smith steals it. The Knicks go the other way.

2) And again, here: David West is posting up against Carmelo Anthony, clearly looking for a lane to kick the ball out. Predator J.R. Smith uses Roy Hibbert and Tyson Chandler's massive frames to hide. 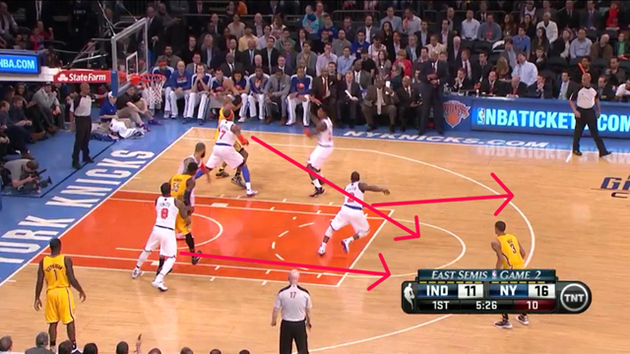 Felton's already beginning his charge towards Paul George, who's off-screen but on the perimeter. Smith, anticipating Felton's rotation, is already leaning towards George Hill. Now remember, West can't see Smith. So when Felton leaves his man, it looks like there's a wide open kick for a three. But out pops J.R., and the Knicks have a fast break.

3) Now you may have noticed that Smith's eyes seem particularly locked in on the ball, and you'd be right. Sometimes his aggression does come back to haunt the Knicks, especially if his man cuts back door. Lance Stephenson does exactly that on this play, and Smith completely loses track of his whereabouts. By the time he picks him up again, it's too late. Stephenson has the ball under the hoop for a layup (which he luckily blows).

Okay, so what of this? These aren't just isolated examples. Let's use the 2013 playoffs as our sample size, because it can double as proof that Smith's defensive performance doesn't lapse in spite of his offense. Below I tabulated his defense according to rotations - whether they were good or bad. So what's a good rotation, exactly? For our purpose, it is defined as a defensive action to deter a scoring opportunity by a player that is not J.R. Smith's man - which is to say playing help defense, rotating to open players on the backside, and so on. A bad rotation, then, is the incorrect defensive play, whether it be rotating to the wrong player or not rotating at all (as we just saw).

During those twelve playoff games, here's how each of his defensive possessions broke down (only possessions in which he was an active participant in the play in some fashion were counted):

Of his 95 active rotations in the two playoff series, nearly 70% of the time Smith used his noggin the right way. And while we don't have a league baseline to contextualize this number, think of it this way: Smith messed up 29 rotations over 12 games, which comes out to an average of 2.42 poor rotations per game. Or: he only screws up in half-court defense 2.42 times per game. Pretty solid, I'd suspect.

Meanwhile, 5.5 rotations per game (66 good rotations over 12 games) actively helped to deter, or should have deterred, a scoring opportunity. Again: not too shabby, it would seem.

Smith's isolation defense is even more impressive. More than just his particular points per possession against, I included team points per possession against: which is to say how many points opponents scored when a sequence that led to a shot began with an isolation. So if Paul Pierce posts up J.R. Smith, makes a few moves, goes nowhere, and eventually kicks the ball out to Avery Bradley for a contested three, Smith deserves some of the credit. These statistics, though inexact, help to capture that. Anyway, here's Smith in isolation during the playoffs:

0.80 points per possession when a scoring sequence begins (and possibly ends) with an isolation against J.R. Smith. If you didn't already know, the league average in general PPP is 1 (That average dips slightly in the playoffs, to be fair). So attacking J.R. Smith in isolation is actually less effective than the average offensive play. And I didn't even mention his rebounding, which is stellar for a guard. But more precisely, he almost always boxes out when his man doesn't leak out to play defense - 23 out of 30 available box out opportunities (76.7%) were seized by Smith during the playoffs, if you're curious.

The bigger point is this: when you think of J.R. Smith, don't just think about his sometimes nightmarish offense. Think about his defense too, and know that it's a valuable asset this Knicks team could desperately use.

Note: pick-and-roll defense was excluded from this exercise because the Knicks almost always switch.