KnicksTape: How should the Knicks isolate Carmelo Anthony?

Which spots and moves work best for Melo?

Share All sharing options for: KnicksTape: How should the Knicks isolate Carmelo Anthony?

It's a fact of offensive life that a Carmelo Anthony-led team will feature a healthy chunk of isolation play.  He's arguably the most dangerous one-on-one player in the league, and often times he's able to generate higher quality shots than any particular offensive set or play.

But isolation, even if it's sometimes statistically more efficient than other forms of offense, can have particularly devastating effects in the long-term scope of a game. Non-isolators miss shots due to lack of engagement in the flow of play; defensive effort suffers for similar reasons; shots become more ill-advised because players want to capitalize on their limited touches.

And that's what's so difficult about designing a Carmelo Anthony-led offense. How do you balance his strongest asset against the integration of the entire team? At the beginning of last season, the offense flowed through, instead of towards, isolation. If guarded one-on-one with little to no help, Melo would eat his defender alive. If doubled or pressured with weak side rotation, he would kick the ball out for three-point shots or secondary penetration.

But once those shots stopped falling (Jason Kidd's, most notably) Anthony stopped trusting teammates. With less trust came more possessions ending in isolation, which in turn fueled the perimeter shooting struggles, which fueled more isolation, and so on. Indiana funneled New York towards this cycle in the second round of the playoffs, and it eventually helped the Pacers grind the Knicks offense to a halt.

Still: It's foolish not to isolate Carmelo Anthony. In smaller doses, it's an extremely effective tool to draw over-help and open up shots and driving lanes for teammates. Last season, Anthony found himself in 9.35 isolations per game, for a total of 767 on the year (not including playoffs). He scored or drew a foul on 46 percent of those possessions, which is an impressive rate considering the large sample size (note: turnovers counted as misses). So if we know the Knicks are going to isolate him, we can at least ask some simple questions - the first of which is:

Where should the New York Knicks isolate Carmelo Anthony?

The first step is to re-calibrate his isolation data (via Synergy Sports. Post-ups were included in the isolation data.) according to a different set of parameters, the first of which is location. I divided the court into five sections: left wing (including baseline), left elbow, top of the key (including perimeter from elbow to elbow), right elbow, right wing (including baseline). Here's a visual for a better idea: 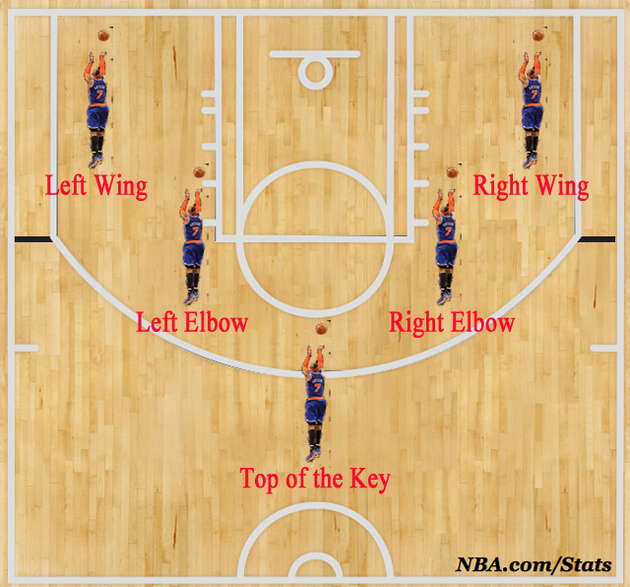 The locations are inexact and at times subjective, but the idea is to capture the five different angles Melo has of the hoop in his most common isolations.

It's also important to note that this is where the isolation move begins, and not where the shot is taken.

For instance: Let's say Anthony has the ball at the top of the key, takes two dribbles and pulls up from the right elbow. This is a top of the key isolation. The reason why it's constructed this way is because all shots in the same location are not the same. The example just mentioned is very different from an isolation that begins at the right elbow, and ends with Melo jabbing and pulling up without a dribble. This method better captures the breadth of moves possible from each origin point, and therefore which locations are most effective.

Anyway: What did the location data tell us?

Anthony's best spot, the right wing, also sports the highest percentage of shots - which means the Knicks are somewhat maximizing Melo's isolation value. But the right elbow is mostly untried (48 attempts), and the left elbow, which is basically ties the left wing for second place, is under-utilized. Meanwhile, the top of the key, one of his worst spots, is over-utilized. In the end, two takeaways:

1) Top of the key isolations aren't so wonderful. Everything else is mostly in play.

2) The elbow (particularly the right) is kind of unexplored, isolation-wise.

And more on that second point: If Melo's best spot is on the right wing, the right elbow might be a spot worth investigating if only for purposes of variation.

How should Carmelo Anthony initiate his isolations?

Meaning, from what initial position? There are three positions from which Anthony most commonly chooses to attack his opponent: a face-up, post-up, or already dribbling.

Here's the face-up and post-up: 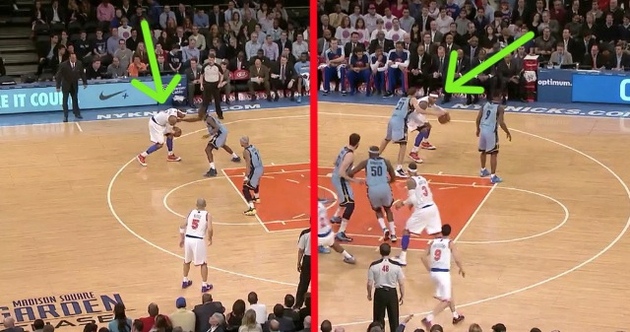 And the already dribbling:

What do the statistics tell us?

The post-up is three percentage points higher despite being least common. Meanwhile, there was virtually no difference whether Melo faced his defender from a triple threat position or attacked him with a live dribble. This is certainly counter to most perception, as it's commonly held that the triple threat is the most effective and technically sound way to beat a defender one-on-one.

And now, the last question:

What type of shot should Carmelo Anthony take on isolations?

A drive (including post-up back-downs), pull-up or fadeaway?

I know, shocker. Melo is light years better when he takes the ball to the hoop. Yet he pulled up more last season, despite only shooting 38.7% on those shots.

The quirk here is the fadeaway, which in a relatively solid sample size is actually more effective than the pull-up. So, why?

Within these general categories are a few go-to moves upon which Anthony sometimes relies - the most common of which is the right shoulder fadeaway:

This past season, he made 37 of 65 such shots (56.9%). Yes, the shot appears terrible. But Anthony is an unbelievable player, so it's no surprise that one of the most difficult shots in the game actually produces quality results for him.

His other specialty moves are even more effective, though in much smaller samples.

Here's the more specific and raw data, if you care to take a look and draw some of your own conclusions.

1) The shot that kills Melo's scoring percentage on the wings is the face-up/pull-up:

2) Often times at the end of the quarter, Melo isolates from the top of the key. Typically he's already dribbling, and decides to take a pull-up.

3) The most frequent shot type was the post-up fadeaway (85) from the right wing, a subset of which was the right shoulder fadeaway mentioned earlier. Though he struggles in other fadeaway situations, the difference is in planning. When he sets up his fadeaway, he's effective. When he's forced to fade due to good defense or a double team, he misses.

4) Melo in the post is particularly dangerous because he's able to tailor his game to the defender. If it's a smaller man, he backs him down and gets a good look at the rim. If it's someone bigger his right shoulder fadeaway is often too quick for the defender to react.

If there's any one takeaway here, it's that Melo should drive the ball more. But it's important to realize that this suggestion is subject to circumstance. Defenses like Boston or Chicago thrive at shutting down driving lanes and forcing perimeter play. Some teams simply dare him to shoot. But the advantage of Melo working closer to the rim is that he often draws help from a big, who leaves Tyson Chandler or Kenyon Martin free for an offensive rebound. Not to mention Melo, whose second jumping ability is tops in the league. How many times have we seen him grab his own board and finish?

In the end, this evaluation is only partial: a further question we might want to add is how the team's scoring percentage changes based on different Melo isolations - which is to say, what happens when he passes the ball, either directly for an (hockey) assist or for a lame duck pick-and-roll that goes nowhere? There's a lot more to uncover here to direct more efficient isolations.