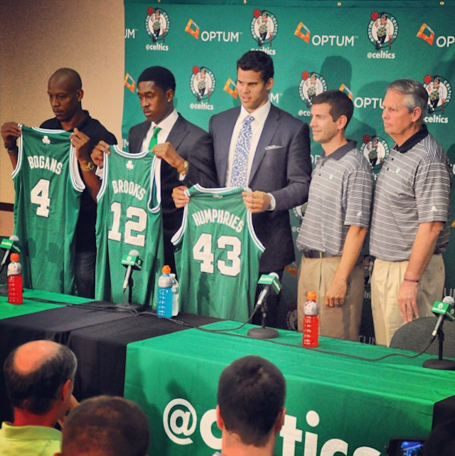 I want to give MarShon a hug.

Paul Pierce decided to take his (already large) distaste towards the New York Knicks to a whole new level. Fresh out of the gate he was challenging the status quo.

"I think the hate [for the Knicks] has grown a little. Everybody knows how much I disliked the Knicks when I was with the Celtics, but I think it's grown to another level. I think it's time for the Nets to start running this city."

This begs the question: how will these New York Knicks respond to the challenge? Well, actions speak louder than words. So what did Raymond Felton do?

"At the end of the day, we’re still New York’s team. We’ve still got New York on our chests."

I can confirm that New York is on your jersey. This is a fact. You know what else is a fact? Paul Pierce playing angry against the Knicks is terrifying. Be quiet, Raymond. Be quiet before you say too much. Actions speak louder than words!

"They'll never take over the city."

RAYMOND! While I admire your willingness to play along with Paul’s trash talking and defend your team, understand your actions. I am sick of seeing this. It’s not even about the game-winner at this point, it’s how he celebrated. I hope to never see Paul Pierce airplane-ing around Madison Square Garden again, and you feeding Pierce’s appetite for Knick hate is not the way of doing it. Actions speak louder than words!

With the help of Washington D.C.-based trainer Keith Veney, Felton says he has lost approximately 15 pounds since the end of the 2012-13 season. - ESPN

Now we’re talking! That’s a concrete, helpful way of addressing the situation. This is a solid way of attacking adversity head-on! How do other Knicks attack adversity?

Iman Sh—uh, wait, what? J.R. is bringing an armored truck to a basketball/rap war. This, in his mind, is definitely a Trump card. Let’s break this headline down for a second.

J.R. just received a big new contract for $24 million across four years. So for $450,000, he’s spending about 10% of his yearly paycheck on this. Ladies and gentlemen, J.R. Smith! As for the armored truck…

Smith, who’s recovering after surgery on his left knee in the off-season, rolled up to Meatpacking District restaurant Catch on Thursday night in a Gurkha F5, which is made by Toronto-based Terradyne Armored Vehicles and used by police and the military. – NY Post’s Page Six

Smith parked the oversize truck, worth about $450,000, on the street while he dined inside. – NY Post’s Page Six

Im at #War with all #HATERS RT @4everhatin15: @TheRealJRSmith what is the need for buying an armored truck?!

I don’t know why I was expecting anything different. If I’m the Knicks, I am not afraid of any adversity coming my way. So this is a message to Paul Pierce, the Brooklyn Nets, Kendrick Lamar, and all #HATERS: be afraid. Be very afraid. J.R. Smith has an armored truck.