KnicksTape: What can Andrea Bargnani bring to the table?

An imagined role, plus some sets that might work.

Share All sharing options for: KnicksTape: What can Andrea Bargnani bring to the table?

This would appear to be bad news. The Knicks gave up one of the game's best shooters in Steve Novak for a non-rebounding, non-shooting seven-footer who also happens to be allergic to defense. Oh, and he'll cost $11.8 million this upcoming season and $11.5 million the following year, assuming he doesn't (he won't) exercise his early termination option.

So what's the good news? There's that fresh start/less pressure/optimism abound thing, which could work. But more reliable than some return-to-form miracle is Bargnani's league-wide reputation -- meaning teams still regard him as a knockdown shooter, even if he might not be. And this matters for a number of reasons, but most importantly because he can actually space the floor.

What does that mean, exactly? A basketball team can't just stick shooters around a great dribble-driver or isolation player; if the shooters are incapable of other offensive moves, namely pump fakes and drives/pull-ups on hard closeouts, weak side defenders guarding the shooters can cheat more towards the strong side.

Think of it in terms of Steve Novak: A common misconception about his ability to space the floor lies within how defenders guard him. We typically assume that they just latch onto his hip and stay attached to him all over the floor -- any kind of space and he's lethal. This is true, to some degree, particularly when Novak is close to the ball.

Here's Novak on the same side as a Pablo Prigioni drive to the basket. After Prigioni turns the corner on the pick-and-roll, both defenders get caught up Tyson Chandler. There's now a gaping hole straight towards the rim, with only Chris Bosh capable up stepping up. 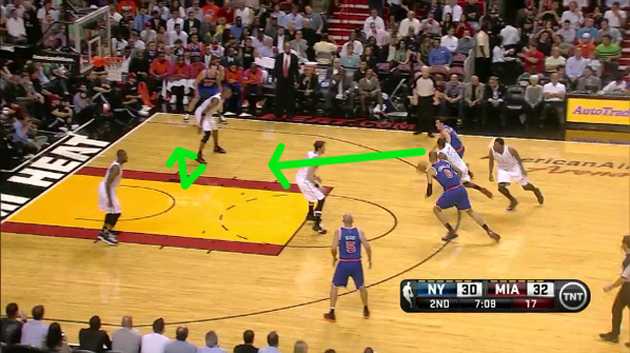 Except he doesn't, because Steve Novak is his man, on the strong side and in the passing vicinity. So Bosh feigns help defense, opting for a deterring lunge towards the paint, followed by a quick scramble back. Prigioni walks in for a layup.

Though we actively attribute this effect to Steve Novak, it's a common NBA theme these days to shut down the three-point line instead of playing help defense. Teams typically rely on weak side rotations to cover this void, and would rather force penetrators to make longer and more difficult passes to the opposite perimeter or corner.  This is why the loss of Novak isn't actually all that detrimental; the defense-siphoning role Novak fills can be handled by any capable shooter.

But the real problem surfaces on the weak side. See here, when Novak is in the opposite corner in transition (not pictured, but he's in the right corner), while his defender, Donald Sloan, is light-years away. 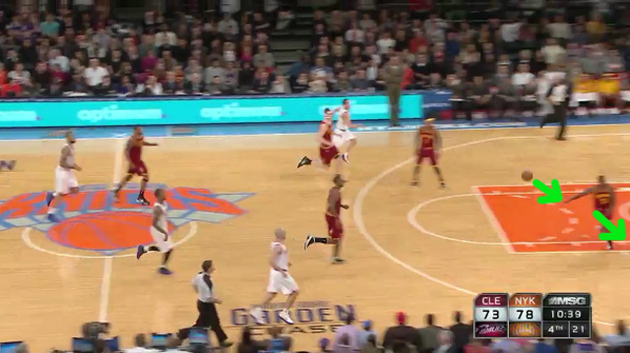 Moments later, Prigioni fires a cross-court swing pass right into Novak's arms. But Sloan recovers, despite having to cover a lot of ground, and Novak hits him with a pump fake. Sloan flies by, and is actually behind Novak as he begins his move towards the rim. 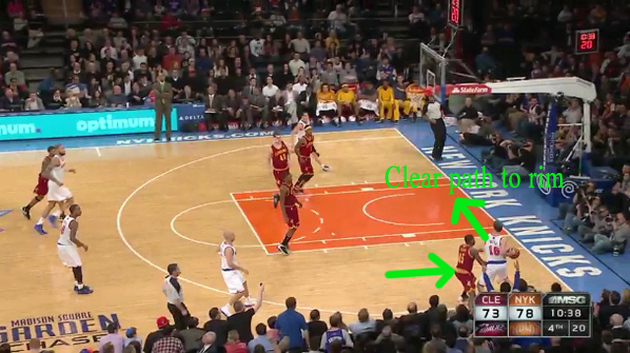 Except Novak can't capitalize on Sloan's momentum carrying him the wrong way; his lack of explosion to the rim allows Sloan to reestablish position moments later, eventually pushing Novak towards the sideline and an errant pass.

But the key, here, isn't so much Sloan's recovery speed as it is his recovery effort. When you watch the play below, notice that he closes out at full speed with no regard for a pump fake or blow by. Instead of closing out with choppy feet to hedge against a move towards the basket, his only purpose is to prevent a Steve Novak shot attempt.

And that's the Novak problem, in a nutshell. The inherent spacing value his shooting brings is undermined by his inability to capitalize on overzealous closeouts. Defenses know this, and actively run him off the three-point line with full sprint closeouts and without consequence. And because they're running at top speed, they can stretch their coverage distance. The result is more help on the strong side, reducing the threat of a, say, Carmelo Anthony drive. Novak's essential spacing purpose is rendered moot.

Enter Andrea Bargnani. Say what you will about his offensive repertoire, but at the very least he's fully capable of punishing defenders who rush towards him too quickly.

Because he's more than a spot-up shooter, defenders play him differently -- or at least treat him as a viable threat in other offensive functions besides standstill shooting. That's what Louis Scola does here, trying (and failing) to close out with choppy steps to prevent a drive.

And the benefit of this defensive technique is two-fold: First, that Bargnani -- should he receive the ball on a swing or kick out -- will actually have room to shoot, with defenders closing out more cautiously. And second, that Bargnani can actually, well, drive the ball to the basket and make something happen.

How else can New York utilize Bargnani?

The constant comparisons to Steve Novak aren't mean to undervalue Bargnani's role; it's that in the Knicks offense, he'll never serve as a primary scoring option -- either on the first or second unit. But in the Novak role, Bargnani can be much more effective than Novak ever was.

With one caveat, though: as long as the Knick use him as a power forward or center. Bargnani's value isn't relative to his shooting; it's relative to his size as a shooter. Because he's seven feet tall, opposing defenses will be forced to use power forwards and centers to guard him. If he lingers on the perimeter, he can draw out basket-protecting bigs into uncomfortable perimeter territory and reduce the defense's dribble-drive help capabilities. This is what Mike D'Antoni used to revolutionize the league, and is "small ball" in its most literal sense. Four wing players around one big, spacing the floor and stretching defenses. But the "stretch" four isn't "stretch" if he's not being guarded by a big.

This is especially key in pick-and-roll situations. The Knicks have avoided Guard-Novak pick-and-rolls the last two years because Novak isn't a particularly strong pick-setter. Here, he starts setting a pick on Nic Batum well before any contact is even possible. Batum uses the extra moment to slide under the screen, and Novak begins releasing before Batum has even moved past his shoulder. 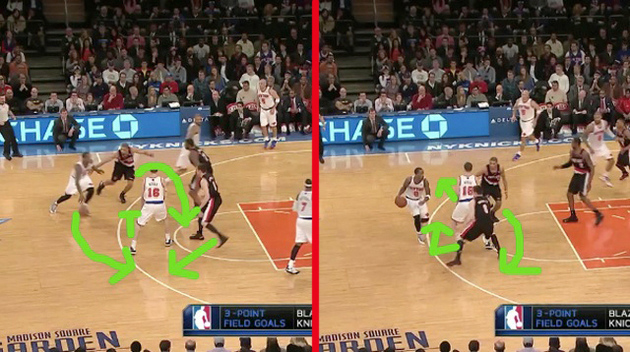 The early movement collapses the viability of the play. Because Novak is already on the move, Luke Babbitt and Batum don't have to choose between a well coordinated switch or a hedge-and-recover that could leave JR Smith with a lane to the rim. The lack of tight spacing allows an easy hedge, and Babbitt is in Novak's face as he catches the pass and releases the three.

Novak's tendency to slip the screen and scramble to the three-point line a bit early ironically hurts his three-point shooting opportunities, because it refocuses the play from an option (drive or pass) to an obligatory pass -- once again, making it easier to defend.

Bargnani, at least, is a much more effective pick-setter -- simply because he's taller and wider, and but also because he tends to hold his picks a tick longer. That extra split second ensures contact on screens, and the requisite room to corner defenders into a difficult decision.

His contact on this play with Orlando Johnson forces a hedge, bordering on a switch. 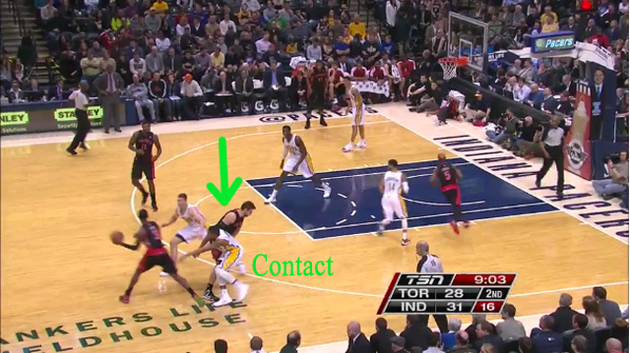 But the key is the extra half-second Bargnani holds the screen. Because he locks up Johnson, it leaves Tyler Hansbrough in a difficult situation: switch and succumb to a terrible mismatch, or hedge and risk the possibility that Orlando Johnson won't recover in time.

Instead, both players fly to Amir Johnson, who receives the next pass, and no one sticks with Bargnani, who cans the jumper.

It will be easy enough to integrate Bargnani into the triple pick-and-roll and Horns sets the Knicks relied on all season; his versatility allows him to fill various roles in multiple play types. But part of the problem the Knicks ran into at the end of last season was a lack of creativity on the offensive end of the floor -- too many isolations, too many straightforward pick-and-rolls, not enough decoy and secondary action. Here's a play that might solve that problem, with the following second unit lineup that we might see this season:

The screening sequence under the basket could possibly free up either Udrih or Smith for a three-point shot, but its real purpose is to get their defenders leaning towards the perimeter and away from an interior help position. That way, when the Prigioni-Chandler pick-and-roll happens, there's room to operate.

And then there's the Bargnani kicker: because opposing bigs would likely hang back to guard against the Chandler lob -- Knicks points guards don't typically incite fear with their pull-up jumpers -- the Bargnani back screen can free up that lob. Meanwhile, Bargnani can slide to the top of the key for a shot, should both defenders get sucked under the rim. Other teams would likely need a guard to set that screen in order to create a credible pop, but that's the Bargnani advantage: the size of an effective screener, the skills of a guard.

Ultimately, Andrea Bargnani won't figure much into the Knicks' offensive game plan. But if New York can properly exploit what he does bring to the table, he can certainly bring value to a potentially more innovative and potent second unit.