KnicksTape: Does Amar'e Stoudemire actually have a post-up game?

Share All sharing options for: KnicksTape: Does Amar'e Stoudemire actually have a post-up game?

Last summer, Amar'e Stoudemire went to big man sleepaway camp with Hakeem Olajuwon to develop a post-up game. The idea, in principle, was enticing: Wobbly knees and diminished athleticism limited his effectiveness as a pick-and-roll player, and the low post was a mostly barren area of the Knicks offense. But more than that, Stoudemire didn't want to become a dinosaur. In just a few seasons, he went from MVP candidate to marginalized superstar to injury-prone financial liability. So he rejiggered his offensive game at an age when most players are locked into their own style of play.

It seemed to work. Stoudemire certainly looked the part last season, as he relied less on brute speed and power -- the former staple of his offensive game around the rim -- and instead utilized deft footwork and a light touch in the post. But ultimately it's about putting the ball in the basket, so the question wasn't quite answered: Does Amar'e Stoudemire actually have a post-up game now?

Taken at face value, Stoudemire's post-up statistics seem to indicate that he's an average player from that spot. His 0.92 points per possession in the post ranked 33rd in the league according to Synergy, and he scored or drew a foul on 45 percent of his post-up shot attempts (Note: turnovers were counted as misses in this study). But individual made baskets are only half the battle; the low post is a focal point for ball distribution, particularly to three-point shooters on the perimeter. So the more pertinent question centers around basket creation: Does Amar'e Stoudemire create basket opportunities out of the post for the rest of his team?

No. Or, more optimistically, not yet.

A post-up is a localized isolation that places added pressure on a defense to double team. Simply put, the ball is closer to the basket and defenders are on high help alert. Even if the opposition doesn't send an immediate double team, it's an almost guarantee that a move towards the rim will attract perimeter defenders and open up the three-point line. The best post players are able to capitalize on this attention and force an impossible defensive choice: leave a player one-on-one near the rim, or give up clean looks to three-point shooters. The Dwight Howard-led Orlando Magic executed this strategy to perfection and exemplified the tactical nightmare caused by an effective post player. But the key wasn't just Howard's ability to score on the block; it was his pre-recognition of double teams and passing angles, coupled with a willingness to move the ball.

Amar'e Stoudemire, as of yet, lacks this skill. Tracking all of his post-up touches from last season -- shot or no shot -- reveals an interesting stat: In 139 post touches last season, Stoudemire shot the ball 120 times -- which is to say that he only passed the ball out of the post 19 times all season. 86.3 percent of the time, giving the ball to him in the post was a black hole. But on those few possessions when he did move the ball, here's what happened:

Exactly one point per passing possession (19 points, 19 possessions), including 14 out of 15 quality shots and three-point opportunities -- which for the Knicks, was a higher value shot than most two-pointers. So, good things.

Stoudemire's post-up game can be divided in half: the possessions when he backs down his defender in a traditional sense -- the prototypical post-up -- and the face-up from a post position: 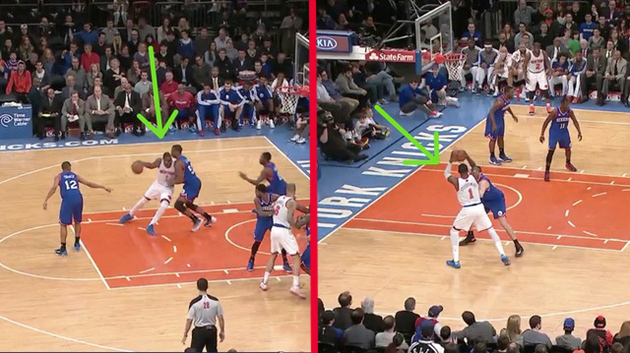 And then more simply, by location: left block or right block. Here's how every post-up shot breaks down through those metrics:

Here's what you should take away:

2) By shot type, the news is a bit worse. He has more pure post-up attempts (65) than face-up attempts (55) despite a much higher face-up shot percentage (50.9) than post-up percentage (40.0). But that's partially understandable, if only because Stoudemire did spend an entire summer developing this facet of his post-up game. What's more curious, however, is why the face-up portion is so much more effective. And to that question, here's only a theory: Because Stoudemire's game for the past several years has relied on face-up situations where he can use his explosive first step to beat slower defenders, he's more comfortable angling his body that way.

And that's why most of Stoudemire's low block possessions begin with a post catch followed by a face-up. Only then does he execute a move from the face-up position, or return to the post-up backdown.

3) Good things happen when Amar'e faces up from the left block -- 23 of 42, good for 54.8%. The face-up is advantageous for the reasons explained above, and the left block is typically the favored side for most righties because it allows them to drive middle and finish both away from defenders and with the dominant hand. Driving right from the right side, meanwhile, limits this distance advantage because a right side drive is a baseline drive -- which is harder because it leaves offensive players susceptible to blocks from behind by the primary defender.

Throughout the season, Stoudemire relied on a few key moves that he picked up over the summer. But the most effective one was the simple right hook from above, a shot that went in 13 out of 19 times.

Two of his other and more common moves actually resemble facets of the Carmelo Anthony arsenal -- the first of which was one dribble right, spin back left. Though Stoudemire uses the move in reverse as compared to Anthony -- as a right-handed and seldom dribbler, Stoudemire is only comfortable spinning when the ball starts in his right hand, the easier move for righties, whereas the more talented Melo starts left and finishes right -- the fundamentals are ultimately the same.

And now Stoudemire, who connected on 9 of 15 of these attempts this past year.

(Yeah, yeah, he got stripped by Boris Diaw. But you get the idea.)

And finally, another move we've seen from Anthony: the post-up catch followed by a quick baseline spin. Except Stoudemire still has trouble here, only hitting on 4 of 14 attempts. Maybe he should cut this one out, or at least work on it a bit.

All of this, of course, is subject to the sample size problem (120 post-ups over 33 games), as it's only the beginning of Stoudemire's post development. Still, there were certainly signs of significant progress last year, and we can safely expect an even more refined post game next season. But as it stands now, he's in an uncomfortable middle ground. This iteration of post-up Amar'e Stoudemire is dangerously close to a pure isolation player, something which the Knicks certainly don't need more of -- especially if he's only going to score on 45 percent of his post-up possessions. Isolation is only worth the ball stagnation if the offensive player can score at an alarming rate.

Not to mention that Stoudemire isn't even a semi-non-passer in the post; he's a complete non-passer. He appears so concentrated on properly executing the technique of each move that he loses track of the right basketball play. 17 of his 19 post passes were merely a consequence of the failure of his isolation move, which is a troubling sign. But to be fair, we couldn't realistically expect Stoudemire to soak up every fine detail of post-up play in one offseason. It's a skill developed and honed over time, and he only had 33 games to experiment last year. The focus, therefore, was on himself -- if he's not respected as a post-up threat in the first place, the passing game is rendered entirely moot.

Anyway, back to our original question: Does Amar'e Stoudemire have a post-up game? The short answer is: kind of. He's certainly more than on his way to becoming a potent scorer on the block, but the other half -- that passing half -- is where he'll help the Knicks' spacing and ball movement, or stick the nail in the isolation coffin.