Every time I think J.R. couldn't possibly be any dumber, he does something like this...AND TOTALLY REDEEMS HIMSELF!

Now that you've recovered from the shock of that epic mind-bomb, perhaps the time has come to discuss the impact of his five-game suspension. The first problem we encounter is that, due to his off-season knee surgery and uncertain recovery schedule, nobody is quite sure how many games J.R. will miss - all we know for sure is that he'll miss at least the first five games. If he's not in game shape by the start of the season, that suspension will be tacked onto his in-season recovery time. Just to be safe, let's look at the first 11 games of the season:

...so, let me the first to say, "PLEASE GET WELL SOON, J.R.!" If he's ready to go by game one - and, as a result, misses only games one-through-five - the schedule will mostly play in the Knicks' favor. After game five, however, they'll face a much tougher stretch, culminating with their first rematch against the Pacers since last season's playoffs.

Since I'm already on record as predicting an 82-0 record for the Knicks, I'd better look for a silver lining in this cloud of blunt smoke. And while I'm a fan of J.R., I think this suspension could prove a blessing in disguise for the Knicks. Coach Mike Woodson has a few new toys to play with this season, and he has shown in the past that he can get creative...but only when absolutely forced to do so. Here's a list of unintended consequences of J.R.'s suspension that could reap benefits throughout the 2013-14 season:

Why do some of us like Woodson's semi-controversial Ray Felton-Pablo Prigioni starting back-court? Only because the pairing managed a magnificent plus-16.1 points per 100 possession in 450 minutes, including the playoffs. But Felton/Prigioni was only the best example of a very successful season-long experiment:

Jason Kidd has since been replaced by veteran Beno Udrih, and while Udrih might not reproduce the breathtaking highs of Kidd's '12-'13 campaign, he's also unlikely to go a month or so without scoring, like Kidd did in the playoffs. The point is: the two-PG lineups need to stay, and with J.R. out, Woodson will probably forced into more of these lineups to start the season.

From the second his elbow touched Jason Terry's noggin, J.R. Smith seemed to take a basketball walkabout - even when he played, he drifted through games like a man on a peyote-fueled vision quest. It was the ugliest possible style of ball, played at the worst possible time.

Fortunately for the Knicks, Iman Shumpert chose that very moment to raise his game - averaging 11.0 points through his final nine playoff games on 42.5% from the field (41.2% from beyond the arc). He found his three-point stroke during the season - shooting 40.2%, even as he struggled to regain his agility and explosiveness following knee surgery. Now that most of his pre-injury athleticism has returned, it's time for Shumpert to shoulder a bit more of the scoring burden. And for this to happen, Woodson will have to lengthen the leash a bit. Even during last year's Pacers series, when Shump was clearly playing at a higher level than J.R., Woodson let J.R. shoot the Knicks into oblivion. Hopefully a few early-season games without J.R. will give Woodson no other choice but to showcase Shump.

I'm not against the idea of giving T-Deuce a chance to showcase his skills early in the season, but I've seen enough of Woodson to know there's no way he hell he's going to give this kid playing time right off the bat. If anything, this may earn the kid a few more preseason minutes...and there ain't nothin' wrong with that.

No doubt about it: J.R. deserved that Sixth Man of the Year award. But there were many times during the season when the second-unit offense became far too stagnant. The strategy for maintaining offensive production with Carmelo Anthony on the bench can best be summed up by this flowchart: 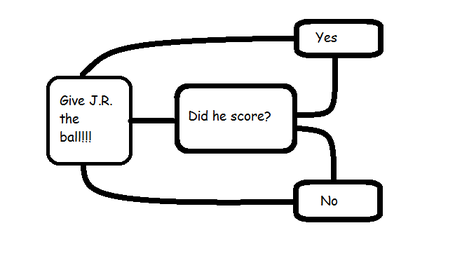 And, hey, they won a hell of a lot of games with that strategy...until J.R. suddenly forgot how to play basketball, and the number of nos far outweighed the number of yeses.

It might be time to diversify the second-unit offense - and the Knicks might have the personnel to do just that. Say what you want about Amar'e Stoudemire and Andrea Bargnani, but they have put balls into baskets on occasion. A few games without J.R. on the second unit might be a blessing in disguise, as the Knicks will be forced to employ Bargnani or* Amar'e as offensive weapons. Both are flawed players (especially Bargnani), but the Knicks would do well to find out what they can contribute as soon as possible. There is an opportunity now to give each player a regular-season platform to audition for more offensive responsibilities. And if neither option works out, Woodson can always go back to the chart.

(Note: I would not play these two together...hence the "or".)

As much as fans enjoy complaining about Woodson, the coach showed a delightful, albeit reluctant, mad scientist streak last season: Melo at the four, two-PG lineups, ALL THE THREES, starting James White. His successes outweighed his failures (at least during the regular season), but he always seemed to do his best work when his hand was forced. Well, his hand is being forced again - by J.R.'s dirty piss - and I couldn't be more excited. It has often been said that the Knicks' 2013-14 roster is mismatched, but I wouldn't go that far. They have a deep roster of flawed-but-intriguing players, players who might just complement each other in the right rotations. It is up to the coach to find those rotations, and Woodson may have been given the perfect opening to start that process form game one.