A brief history of Mike Woodson and the curb

To date, he has never kicked or thrown anyone there.

Share All sharing options for: A brief history of Mike Woodson and the curb

So there's this curb. If players aren't a big part of what you do as a team/big piece to the puzzle, that's where you kick them. Here are some times Mike Woodson has referred to said curb:

"When guys lose confidence, man -- it happens throughout the course of the year -- as a coach, and our coaching staff, we've got to show Ronnie a little more love and try to get him back on track, because he is a big part of what we're doing, and a big part of us being 19-7. I'm not going to kick him to the curb."

"I'm not going to kick him to the curb," Woodson cautioned. "He's a big part of what we've done this season.

"I will never kick J-Kidd to the curb," Woodson announced. "Kidd has been a positive for our club, our franchise, and these players that play around him. We all still believe in Kidd. My thing is that he still does the intangibles. He might not score the ball, but he still does the things that help you win."

"But speaking of J.R and what he's gone through this summer, I said a couple weeks ago, I'm not going to kick him to the curb. I like to think he's learned his lesson and hopefully it's a learning curve for him that he'll be better for it, I hope. That's what I'm hoping."

"I'm not kicking J.R. to the curb," Woodson said on ESPN New York radio Wednesday. "J.R.'s a big part of what we've done here and he will remain a big part.

"He's still patiently going through rehab,'' Woodson said. "I don't think we kick him to the curb."

"I'm not throwing Iman to the curb," Woodson said. "I just gotta give him some love and try to build his confidence back up, because we need him."

Woodson: "I'm not kicking Tyson to the curb. I'm not gonna kick Melo or anyone to the curb. We're all in this foxhole together. #Knicks

Finally we have learned the location of this curb. It is in/alongside a foxhole. So they're in the foxhole, and the curb is presumably at the top edge of the foxhole as a sort of barrier. That's probably up pretty high relative to Woodson and company, so it makes sense that he wouldn't want to kick whole human bodies up to that level. That would be difficult. 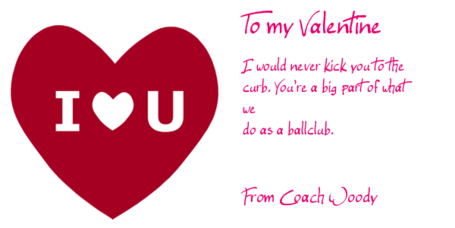