Over the past two seasons, this statement has proven inescapably, terrifyingly accurate. He may not be the engine that drives the Knicks, but his ebbs and flows as a player have usually mirrored that of the team as a whole.

To understand J.R. is to understand the Knicks, particularly on offense. Carmelo Anthony is going to excel regardless of how much the other four guys are contributing -- we learned that lesson all too well last season. J.R., on the other hand, is a player with very clear strengths and weaknesses, and those strengths and weaknesses just so happen to be shared by many of his teammates. They become magnified in J.R. due to his tendency to dominate the ball...and his tendency to blow everything completely out of proportion.

And nowhere is J.R.'s schizophrenic play more evident than in his shooting numbers, as NBA.com's John Schuhmann pointed out last week:

It's not enough to merely call J.R. a good spot-up shooter who struggles on pull-up jumpers. The man went way beyond "good" last season -- he was an elite spot-up shooter. The guard occasionally known as Earl ranked 10th in the NBA in total points and ninth in points per game off catch-and-shoot jumpers. Among the 25 most prolific catch-and-shoot scorers, he ranks second to Kyle Korver in effective field goal percentage. (Click to enlarge.) 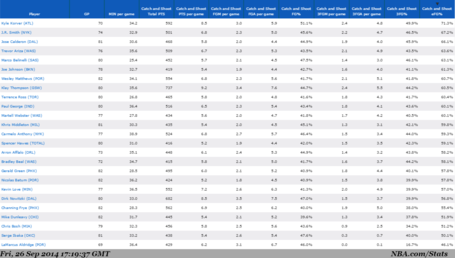 When discussing the effectiveness of jump shooters, finding your name next to Kyle Korver means you are in some fairly august company. This was the Summer of Korver, as the Atlanta sniper was invited to try out for Team USA and made the subject of a feature article by Grantland's Zach Lowe:

Korver is an antique perfectly suited to thrive at the forefront of the league’s evolution. He is among a dying breed who sprint around screens away from the ball, Reggie Miller–style, hoist quick catch-and-shoot jumpers, and sink enough of them to make the advanced math work. "Nobody plays that way anymore," says Steve Clifford, the Hornets’ coach. "Game-planning for him is such a handful."

J.R. isn't quite in Korver's class as a shooter, but he's not as far away as some might think. The biggest difference between the two is that Korver doesn't take bad shots, and he plays in a system designed to get him good looks. Much of J.R.'s poor shot selection is his own fault, but Mike Woodson's iso-heavy offense didn't exactly help matters. When Melo was on the floor, J.R. usually stood in wait; when Melo sat, he was mostly left to his own devices. Last year's offense played to his weakness (one-on-one shot creation) and minimized his strengths (shooting off the catch, passing).

Which brings us to the Triangle. The offensive system to which Phil Jackson has dedicated most of his life is, in theory, the polar opposite of Woodson's hands-off approach. Instead of relying on isolation and dribble penetration, it calls for quick, decisive passing and off-the-ball movement designed to free up players for catch-and-shoot opportunities. As Phil himself put it to the New York Post, his ideal basketball player must first and foremost "be able to move without the basketball…be able to hit an open shot."

Not only would such an offense appear to suit J.R. perfectly, it could play to the strength of the roster as a whole. Take a gander at the player just below J.R. on the catch-and-shoot eFG% chart...why, it's none other than new addition Jose Calderon! That's right, the Knicks now have two of the three best high-volume catch-and-shoot guards in the NBA from 2013-14. And that doesn't even include Melo, who averaged 6.8 catch-and-shoot points per game at a not-too-shabby 59.3 effective field goal percentage.

And how could I forget Pablo Prigioni, lord of the wide-open J:

These Knicks are not going to beat defenders off the dribble with any regularity. They're not going to get to the rim or the foul line very often. What they can do is shoot the lights out, particularly off the catch. Their effectiveness does tend to drop significantly, however, when they attempt to shoot off the dribble (with the notable exception of Pablo Tha Pull-up Gawd):

In the proper system, this crew could rank among the best collection of shooters in the NBA. Hell, even Bargnani made approximately 60 percent of his catch-and-shoot attempts from inside the arc once you subtract those abominably inefficient three-pointers from his overall field goal attempts. If Bargs is going to play -- and I don't think he should -- the Triangle could help him maximize whatever value he may have.

The Knicks' corps of shooters and the Triangle offense might just be the perfect match of players and system. If J.R. and the rest of the Knicks buy into the Triangle and master its principles, this whole wacky experiment might just work after all.