Watch the Knicks practice the Triangle for the first time

Day 2 of Knicks training camp in West Point finally brought us some offense.

Share All sharing options for: Watch the Knicks practice the Triangle for the first time

The Triangle is upon us!

Derek Fisher may have spent the Knicks' first practice teaching defense, but we all knew it was only a matter of time before the coaching staff began divulging the secrets of Tex Winter's legendary offense. Watch them take their first steps in the Triangle before turning back to defensive drills:

Judging by this footage, the Knicks are going to hit roughly 100 percent of their field goal attempts this season. I can live with that.

Per Clarence Gaines, "fundamentals" was the word of the day:

("JC" is assistant coach Jim Cleamons, by the way. Still no sign of Herb Williams. This is going to take some getting used to.)

'@carmeloanthony in shooting drills out of the offense - 2 pass to back door step pic.twitter.com/gBDqPA4kUl

Indeed, the coaching staff handled the ball during the team's defensive drills, which gave us an opportunity to witness the rarest of basketball phenomena: the point Rambis! The 56-year-old, 6'8" Rambis took it to the likes of Carmelo Anthony and Amar'e Stoudemire on the perimeter. 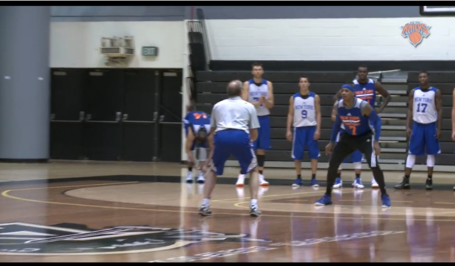 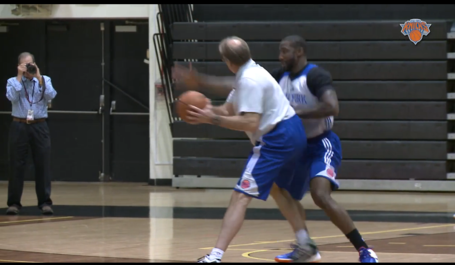 Beware the ass of Rambis, STAT!

Clearly, the day's MVP was rookie Cleanthony Early, who poked the ball away from a Knicks assistant in the practice footage and gave this illuminating interview. I like this kid; I hope he makes many great basketball plays in the near future.

We here at P&T have seen some cause for trepidation, however. Not only is point guard Langston Galloway wearing Raymond Felton's old number, he actually kinda looks like him out on the floor. It is disturbing. 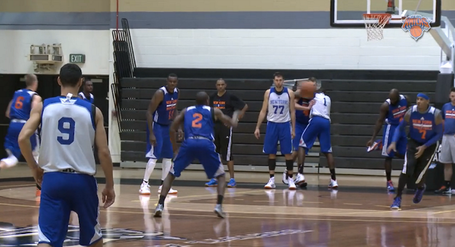 Hey, Langston -- love your name, but if you could change your number and/or general appearance, that would be fantastic.

That's all for today, ladies and gents. The New York Knicks remain undefeated.