Choose Your Own Adventur'e: You and Hubie Brown guide Amar'e Stoudemire to the finish line

Leading up to pre-season, let's have a little fun with a choose-your-own-adventure style write-up about Amar'e Stoudemire featuring the legendary Hubie Brown! Coach Hubie will give you his assessment of the situation and ask you what you'd like to do with this information. In Part One, the community decided to start Amar'e and give him regular minutes. In Part Two you decided to increase his minutes and tighten up the rotation. In Part Three, we elected not to change anything at all.

Share All sharing options for: Choose Your Own Adventur'e: You and Hubie Brown guide Amar'e Stoudemire to the finish line 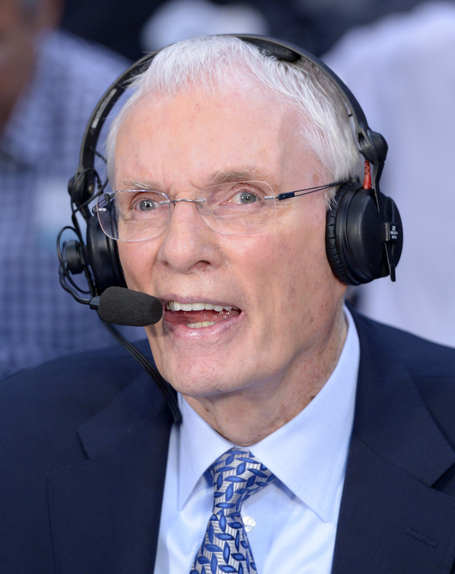 Uh-oh, oh no. Alright, ya hate to see this. You had hoped to finish the season with a flourish. Now, this is the guy, ok that gives ya everything he's got on a nightly basis. Ok, he's a great competitor, and anytime you have an injury situation, all you can hope for is that it's not gonna last you into the long term. Now you're not trying to blame anybody, but ya gotta look back at how ya handled his minutes, ok and it makes ya wonder. Could we, at some point along the way, have given him an extra amount of rest, ok, during the season?

Of course, what we know for sure, is that it's a combination of factors. Ok it's the minutes, and also in the Triangle offense, you ask your big guys to be effective from the top of the circle, ok and then attack the offensive boards and never let up when somebody takes the shot attempt.  Now if you're asking a guy with a history of injuries to do this day by day by day, and we're looking to make a run through the playoffs, we wanna make sure we haven't been grinding him down to the bone all year. What ya want is to have a more gradual run, ok, to the finish. With any luck, you can do that, and you can build up the confidence of your bench guys.

Ok, but ya gotta keep an eye on this now. Ya see, Stoudemire's been asked to give ya quality minutes all season right from the beginning. While the team was trying to figure it out, ok, you gave him a quality amount of floor time. Then you asked him to contribute even more to your offense, and he stepped it up for you. And, of course, ya know he did everything to help from the team aspect of the game. Then ok, he had it really working and was starting to attract a double team and now he's able to find his man cutting from the corner. Ok, we know he was shooting with a really good average in the restricted area, and ya like to see the increased effort on the defensive end. And now the injury situation, ok, you're a middle of the pack team. Ya gotta think, ok, we're probably gonna shut it down here, for Amar'e, for the rest of the regular season.

Ok, so you ask yourself, what could we have done differently and what was our main goals, that we had hoped for, right? For the team. The bench people have come in and accepted the challenge of giving your team some extra scoring punch all year, with Tim Hardaway Jr and JR Smith. And maybe ya think, anytime we have a star scorer such as a Carmelo Anthony, maybe we can shift Stoudemire to more of a bench role for a particular stretch of the season while we figured out the Triangle and made sure he's ready for the stretch run and the playoffs.

So you pushed him, and ok look, he suffered a high right ankle sprain. He's never had that injury before, but it effectively ended his season, ok, because the Knicks missed the playoffs. Ok, and now we look to the offseason. Because there's always something next! Aha-ha-ha! Now come on, stay with me here, this is the final decision you gotta make. Ya didn't build him up and play him heavy minutes early, so he didn't generate a trade value, but he proved on the floor that he can still bring it. Ok, there's gonna be a ton of cap room here and a plenty of roster space to fill. And we know, you're not gonna rush and force a decision. So we have to decide...