Iman Shumpert and the Art of the Steal

Shump has broken out this season to become an essential part of New York's defense, due in no small part to his knack for forcing turnovers.

Share All sharing options for: Iman Shumpert and the Art of the Steal

Hopes were high for Iman Shumpert going into this season. After developing a legitimate 3-point shot last year, the stage seemed set for Shump to establish himself as a key member of the Knicks' core moving forward. For those of us skeptical about the offseason additions it seemed like a leap in Shumpert's play would be the only viable way for the Knicks to remain a top seed in the Eastern Conference. In terms of overall production, Shumpert hasn't exactly exceeded expectations: 6.6 points, 4.1 boards, and 1.8 assists on 38% shooting from the field wasn't exactly the box score line we were hoping to see from the third-year guard out of Georgia Tech. Look beyond the traditional stats, however, and Shump's impact becomes more pronounced.

Last year, the Knicks were often worse defensively with young Shump on the court. Here is a comparison of some important defensive stats measuring New York's performance with him both on and off of the pine: 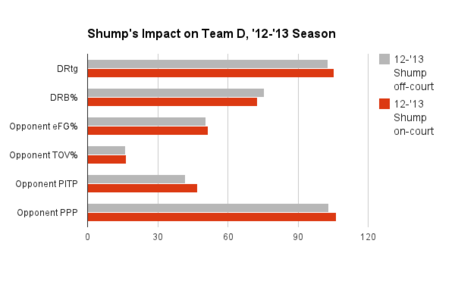 The Knicks posted a worse defensive rating and a lower defensive rebound percentage while Shump played in addition to allowing opponents a higher effective field goal percentage, more points in the paint per 100 possessions, and more points per 100 possessions. New York did force a slightly higher turnover rate on opponents while Shumpert was in last season, but it wasn't enough to make up for the various other ways they underperformed on defense.

Fast forward a year. After a shaky sophomore season following his ACL injury, Shumpert has bounced back to become extremely valuable to the Knicks, as much as any player in the NBA is to his team. Shump's case is simple enough: New York's defense this season is an absolute atrocity without him on the court. With the defensive guard in the game, the Knicks have posted a defensive rating of 102.5. Not necessarily dominant, but good enough that it would match the top-10 Miami Heat if held over the course of the season. Without Iman? The Knicks plummet to a woeful 111 mark. They simply cannot defend without Shumpert attacking the passing lanes and pressuring perimeter scorers. Here are those same on-off stats for this season: 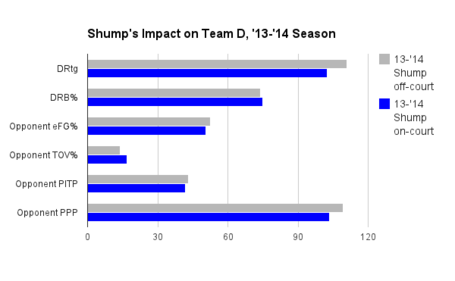 The Knicks have played significantly better on defense in nearly every way while Shumpert has been on the floor. To be clear, this isn't all Shumpert praise. Part of the reason the Knicks' defense evaporates without Shump is the alternatives at guard behind him. J.R. Smith is a decent defender when he digs in and focuses, but he's been unreliable on that end for the entirety of his career. Tim Hardaway Jr. has been a joy to watch on offense this year, but he is incapable of consistently contributing on the defensive end at this point. Shump is the best defender of the bunch, but these aren't exactly stalwarts he's replacing. Still, he deserves credit as one of the few Knicks dedicated to the defensive end of the floor.

What changes while Shumpert is manning the wing for the Knicks? The Knicks suddenly get very good at forcing turnovers. Shumpert is excellent at pressuring ball-handlers, especially in one-on-one situations. He's got quick hands, and is excellent at targeting the ball as soon as defenders expose it in the lane. He's made an art form of hanging his paw in mid-air and measuring his opponent's drive, then slicing down on the ball just as his opponent shows it. This shot is from December 28th's contest in Toronto of Shump defending All-Star guard DeMar DeRozan in space: 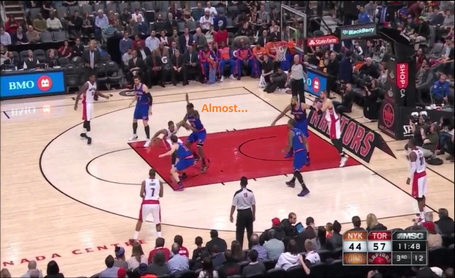 Shump maintains an upright stance while he sticks to DeRozan's hip, and keeps one hand high as he waits for his opportunity. He strikes quickly but misses as DeRozan spins down the paint. But Shumpert is patient, and Shumpert is lucky. DeRozan's spin move gives Shump enough time to recover and deliver another swipe downwards with his right hand, and this time he's able to separate the Raptor from the ball: 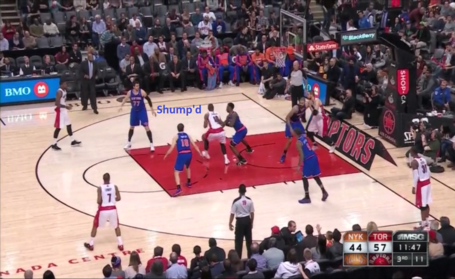 Shump strips DeRozan cleanly and the steal leads to a fast break opportunity for the Knicks.

This, from last week's victory over the Brooklyn Nets, is Shumpert defending Deron Williams in isolation. As Williams begins his drive, Shumpert immediately opens up his stance and begins sliding with the star guard: 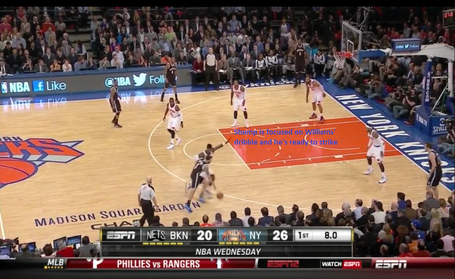 That long left arm is hanging up in the air and Shump is focused as he begins his gamble. If Shumpert mistimes his attack, he could easily surrender a foul or a layup to the craft point guard. This time there is no help coming for Shumpert; Tyson Chandler is too far out on the weak side and Carmelo Anthony is loathe to leave Mirza Teletovic alone in the corner to contain Deron. On this play, Shump doesn't need any help: As soon as Deron brings the orange up to attack the rim, Shumpert's arm slashes down and smacks the ball over to J.R. Smith: 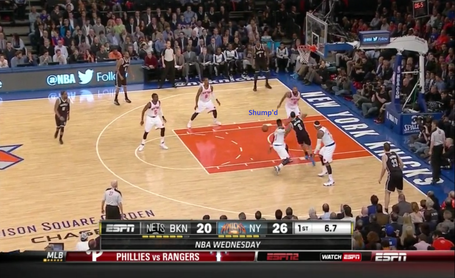 It's risky, but that risk is paying off for Shumpert and the Knicks. The ace defender is forcing turnovers on 18.5% of his opponent's isolation possessions, per MySynergySports. He's also committing shooting fouls on 13.6% of those possessions, so his play isn't without risk. Still, the Knicks need him to disrupt opposing guard offense, and his ability to slide into any perimeter position on defense is invaluable. The Knicks are mediocre at protecting the rim, especially without Kenyon Martin prowling below the basket, so Shump's thievery matters. Knick opponents are turning the ball on 15.3% of their possessions against the Knicks for the season (good for 15th in the NBA), but while Shump is on the floor that rate jumps up to 17%, which would be good for 2nd in the NBA. Shump still has room to grow defensively but it is encouraging to see him making such an impact for the Knicks this year.

With any luck, the Knicks' season will mercifully draw to a close soon. The team hasn't given fans much to be optimistic about this season, but Shump's defensive value is worth noting. Remember, Shumpert wasn't able to post a positive defensive rating differential last season, so there is real growth occurring. Again, some of this increased statistical impact may be due to NY wing defenders this season being worse defensively than Jason Kidd, Steve Novak, and Ronnie Brewer were in '12-'13. Perhaps it is partly due to Shump spending more minutes at his more natural position at the 2 this year. Still, after losing the defensive edge to JR Smith in similar lineups last season Shump appears to be settling in as an actual impact player for the Knicks in this one. Shump has always looked the part of an elite defender, but it's nice to see him making a measurable mark on that end this year. The Knicks have tough decisions ahead with the 2015 free agent class looming, but Shumpert's on his way to proving his value to the team.