Share All sharing options for: Good times from a bad 2013-2014 Knicks season

This was a very bad Knicks season. The tale is best told with thick brushstrokes of darkness dotted with moments of sick hilarity. Embedded in all the losing and strife would be stuff like the premature Andrea Bargnani three, Raymond Felton yawning, Bargnani botching dunks, J.R. Smith untying shoelaces, Carmelo Anthony SMHing on the bench and all that. This went up literally as I was typing this paragraph.

Well, nah. I've spent the morning reminding myself that a dreadful season included some great times, and I've prepared a loosely chronological list of said great times for you to peruse. Enjoy, and please add your own happy memories in the comments.

- The basketball began with Tim Hardaway Jr. drilling a game-winner to beat the Celtics in the first preseason game:

- It doesn't seem like a big deal now, but it was a mildly positive development when Steve Mills spoke and James Dolan spoke a couple months later. 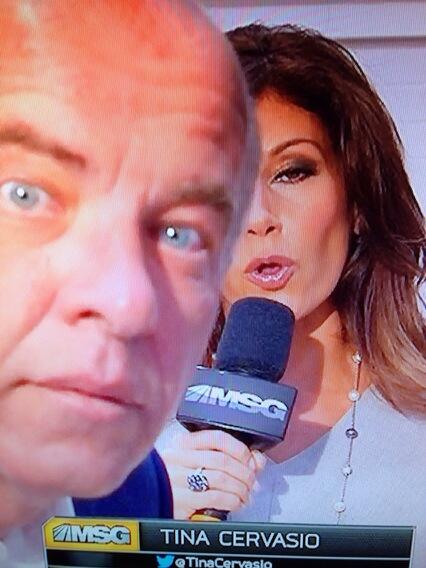 - Metta World Peace scared the fight out of Tyler Hansbrough:

- For a half against the Bucks, the Knicks were a very good team and we had no reason to believe they'd be terrible.

- Immediately after Tyson Chandler's injury, Andrea Bargnani kinda locked up the Bobcats by himself.

- Metta World Peace brushed aside rumors of a kerfuffle between him and Kenyon Martin, insisting they were arguing about pasta shapes.

- The Knicks had their first win streak of the season with a couple blowout wins over the Nets and Magic. The Nets game gave us BARGNANI VS. KG 2013 (more here):

- The Magic game had a couple cool plays, too. I still love this Melo swat on Jameer Nelson:

- The Knicks lost to the Grizzlies, but this Toure' Murry pass to a Hardaway flush was awesome:

@__Kingsleyy5 I didn't ask for your glazed donut face ass to root for me anyway!!!!

- The Texas win streak! Iman Shumpert won the final minute against the Spurs by himself:

- The Knicks crushed the Heat! Tim Hardaway Jr. threw the fuck down:

- The Knicks' win over the Sixers was only half-televised and featured everyone slipping on hockey juice.

- The Knicks' win over the Suns included Mike Woodson' happiest moment of the season when he got to pick Slava Kravtsov to shoot free throws off the Phoenix bench:

- The Knicks got stomped by the Clippers and this man DID NOT CARE ONE BIT:

- Hey Carmelo Anthony scored 62 points one time. Here are quotes from that night. Here's the recap. Here's video of all those points:

- Here's the best GIF from that evening:

- Lots of great bits in the Knicks' dominant win over the Celtics.

- Hardaway had a huge game against the Cavaliers, but the Knicks bench wouldn't let him gun for 30 points before the final buzzer:

- The Knicks beat the Nuggets, which was nice, but this is mostly about HERO DOG:

- Amar'e Stoudemire cooked a lot of folks this year. I think this was my favorite cooking:

- Hey, did you hear the Knicks hired Phil Jackson?

- J.R. Smith tied a Knicks record with 9 threes against the Kings:

- Later, J.R. Smith broke a Knicks record with 10 threes (on a record 22 attempts!) against the Heat:

- The Knicks played football for a moment:

- All the great stuff from the win over the Nets is here, including this:

It was a bad season. There were good times. I encourage you to share more. Now it's time for exit interviews.