The Shump Shake in slow motion and other Knicks-Nets leftovers

Videos and GIFs and such from the Knicks' win over the Nets.

Share All sharing options for: The Shump Shake in slow motion and other Knicks-Nets leftovers

First of all, thanks to Scott for handling the game against the Nets last night. I went to a fundraiser thing for my girlfriend's work and got to eat lots of free chowder and crab parts, so while I'm sad I missed the win live, I feel no regret. Now it is tomorrow and I've just finished watching the game (except most of third quarter because it sounded dumb and the very end because my recording cut off). I found a bunch of videos and stuff, too, so let's look at those together:

- There's a bunch of Phantom Cam footage from the game, but I most enjoy the slow-mo of the much-ballyhooed (penis-fished) Iman Shumpert dribble move:

Shump is often immensely frustrating to watch off the dribble, but he's surprised me with a couple gorgeous moves over the last few games, including a couple last night. This isn't crazy impressive-- Mirza Teletovic isn't the nimblest of adversaries-- but it's an elegant move and a shrewd finish and I appreciate that from a guard with Shump's reputation. And so does J.R. Smith:

- Speaking of J.R., that man spent a lot of time playing point guard Wednesday night. He's done that more and more, and with better and better results. He came into the game gunning a bit, but spent plenty of time with his head up, navigating different kinds of pick-and-rolls, identifying cutters, and spreading the ball around. Raymond Felton seemed to take the reins over in the second half (when he wasn't busy smashing himself on the floor), but he was the de facto off-guard for a while there.

- Speaking of Felton and his hard fall:

Exact Felton quote: "I wanna play. I wanna be out there. You've gotta tear my legs off, all my limbs, for me not to go out there and play."

- Back to Shump. While his offense looked as splendid as ever, his defense was clearly the most riveting part of his of his 24 minutes. Mike Woodson let him guard the ball (Deron Williams) plenty, and he did so with impressive force. And when the Knicks were out of position, which they often were, Shumpert remained alive. Examples of each, occurred back to back! Here's Carmelo Anthony letting his man go backdoor only to have Shump read the entire situation and pounce on the entry pass:

And here's Shump sticking with Williams one-on-one and reaching in to Shump the ball away at the last second:

- Here are allllll the buckets from the indispensable Oakley & Allen:

- You know, I think Tyson Chandler actually prefers to catch alley-oops backward. I guess it makes sense. If you have the coordination to finish with your back to the rim (which...sometimes), then you might as well face the play so the catch is easier. It always reminds me of a whale breaching, which is good.

- At one point, I paused my TV and it looked like this and I thought the lighting was neat: 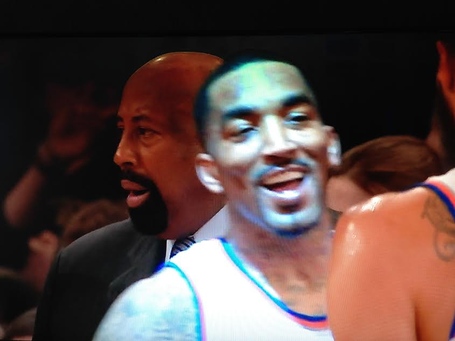 - As was mentioned in the comments, Nick Cannon got mercilessly booed when America's Got Talent tried to film a segment. Even as the world's foremost fan of his films (the Cannon canon), I found this hilarious:

This is a thing that is good and nice:

.@carmeloanthony with his 22nd double-double of the season. He had 10 last year. #Knicks