Knicks of Legend: players and their mythological counterparts

If you make yourself more than just a man...if you dedicate yourself to losing and poor defense...you will become a Knick legend.

Share All sharing options for: Knicks of Legend: players and their mythological counterparts

The man basketball fans call "the point god" found himself in the middle of a Greek tragedy in the second round, when all of his mighty powers could not save him from being chained to a mountain by the refs while Russell Westbrook pecked out his liver.

But it got me thinking -- if Chris Paul is the point god, then what does that make Knicks point guard Raymond Felton? Surely he isn't a god, or even a demigod. So then what is he? A point satyr? Somehow I think a dude with goat legs might be able to fight his way over a screen at least once in a while.

To find Felton's mythological equivalent, I had to move beyond the Greeks.

The Japanese believe in a creature called the Baku, which is described as a "dream-devouring, tapir-like creature." Now, anyone who watched Felton play last season know that he ate Knicks fans dreams for breakfast with a side of chili cheese fries. He ate the dreams of Trail Blazers fans as well, before they ditched him and drafted a guard by the name of Damian Lillard.

But what about the "tapir" part? Does Ray Felton resemble a tapir?

I gotta hand it to the Japanese -- they pretty much nailed it on this one.

So Ray Felton is the point baku. But are their other mythological matches out there for the rest of the roster? Come with me now, as we journey into legend to find the Knicks of myth.

(Note: I used the Wikipedia List of Legendary Creatures.)

Drop Bear - Australian - "Large carnivorous koala that hunts by dropping on its prey."

The drop bear is rumored to pounce on people who don't speak with an Australian accent. It has been photographed only once: 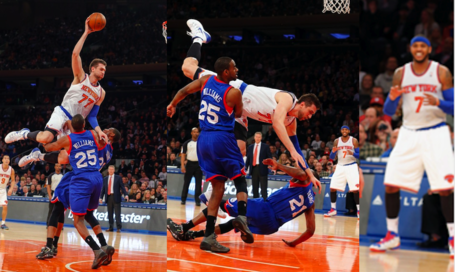 What do the victims, Elliot Williams and Thad Young have in common? Neither speaks with an Australian accent! Coincidence? I think not.

The idea of Bargnani as a marsupial makes a certain sense -- he certainly doesn't play ball like any placental mammal I've ever seen. He moves with the ginger, labored steps of a creature who carries its young in a pouch.

Seko - Japanese - "Water spirit which can be heard making merry at night."

Heard making merry...seen making merry on Instagram...same difference. J.R.'s nighttime merrymaking is the stuff of legends. Even Rihanna, who has been cutting a bra-less swath through every single courtside soiree during the playoffs, said J.R. parties too much.

The Indus Worm may be a distant cousin of the more famous Mongolian Death Worm. I spent six months in Inner Mongolia, but was unable to spot the creature.

I've had no such trouble finding the large, white carnivorous Indus Worm at MSG. You can spot him immediately by his two distinguishing features: the lack of teeth and insatiable appetite for rebounds. Believe it or not, Aldrich led the league in defensive rebounding percentage among players with at least 300 minutes of playing time.

Of course, he only played 330 minutes during the 2013-14 season because...umm...Woodson didn't like bigs and defense? Whatever, I'm done trying to figure that guy out. Bring back the Indus Worm, Phil Jackson!

The Chinese word 混沌 (not to be confused with 馄饨, which is wonton soup) means both a state of primordial chaos or a state of childlike innocence. Yep, that's Chris Smith.

Like a modern-day Peter Pan, Chris Smith refused to grow up and get a real job, clinging instead to the childish dream of earning himself a spot on an NBA roster despite an obvious lack of talent.

But Peter Pan never had a far more talented (and enabling) brother, an all-powerful sports agency, and the most corrupt and incompetent franchise in the NBA working for him. So Chris "earned" is spot on the 2013-14 Knicks, and hell followed with him.

Here is a description of the being hun-dun from the ancient Chinese text "Classic of Divine Wonders":

"It has eyes but can't see, walks without moving; and has two ears but can't hear. It has the knowledge of a man yet its belly is without the five internal organs and, although having a rectum, it doesn't evacuate food. It punches virtuous men and stays with the non-virtuous. It is called Hun-tun"

How better to describe Chris' game during his two minutes of playing time this season?

Say what you want about Chris Smith: The kid almost certainly has a rectum.

Antaeus - Greek - "A giant who was extremely strong as long as he remained in contact with the ground."

Basketball is a sport that involves quite a bit of jumping...or so it would seem. But Z-Bo has never jumped, and will never jump!

Konaki-Jijii - Japanese - "Infant that cries until it is picked up, then increases its weight and crushes its victim."

Sometimes a picture is worth a thousand words.

While it wouldn't be fair to write off Mike Sweetney's career as a complete failure -- believe it or not, he accumulated more career win shares than fellow 2003 draftee Darko Milicic -- the dude got fat in a profession that generally frowns upon such things. He ate his way out of the league, moved to Puerto Rico, and continued to eat.

It should be noted that current Knick Iman Shumpert was once filmed worshiping the demon serpent Q-Rich:

And here I thought Shump was a good Christian boy!