Let's take a look at what the first few hours of @MikeWoodsonNBA have given us.

When Phil Jackson fired Mike Woodson after a dismal season for both the embattled coach and the Knicks as a whole, I have to be honest, I had mixed feelings. Sure, Woody deserved to lose his job. He was a self-proclaimed "defensive coach" and yet, New York allowed opponents to score at a rate of 106.5 points per 100 possessions, good for 24th in the NBA. That is, in a word, terrible. Woodson also had no discernible plan for the team on offense, especially late in games, when the Knicks would often seem like they had no interest in running a play, let alone scoring.

Despite all of this, I'll miss Woody, at least a little bit. As a community, we've spent a fair amount of time discussing Mike Woodson's bumbling public persona. Seth and Joe even wrote a few articles on this important, hilarious, and frustrating subject around mid-season. That's what I'll miss about Woodson. We don't know much about who will coach the Knicks next season, but we do know this person may not be opposed to sitting here and kicking players who are a big piece of the puzzle to the curb. That's probably a good thing, but the part of me who is more interested in chaos and hilarity than any sort of legitimate gratification thinks that's an awful thing.

That's why last night's news was so amazing. For those of you who aren't on twitter/click on articles without reading the headline, Michael Dean Woodson has joined the twitterverse as @MikeWoodsonNBA. This is really the best of both worlds: I get to read more of Woody's ridiculous thoughts, but I also don't have to watch as he runs my favorite basketball team straight into the ground. As a way of celebrating, I thought it might be fun to take a dive into Woody's first night on twitter.

I don't know for sure when Woodson actually joined twitter, but I do know that it was some time before 7:34 PM EST on May 20th, 2014. How, you ask? Because that's when he unleashed his first tweet on the world.

That's a pretty boring first tweet, but I understand. The guy's a high-profile celebrity. He can't go around ruffling feathers. He has an image to maintain. Interesting choice to go with Las #Vegas rather than #LasVegas, though. If he wanted to do #Vegas rather than #LasVegas, fine, but drop the "Las" altogether in that case, Woody. Rookie mistake. 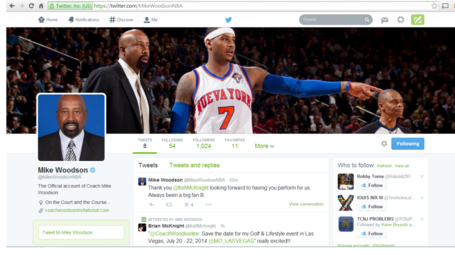 A few things to note here.

First, that profile picture is quintessential Mike Woodson. It's as if he wants to smile but is having a very hard time doing so.

Second, great, and I mean GREAT, synergy between the profile picture and the background photo. He's wearing the exact same outfit in both! I know my screenshot makes it look like the tie in the background photo is pink, but I promise it's silver. This leads me to one of two conclusions: either he really wanted to use that background photo and therefore made sure to be wearing the same suit and tie when he sat down for his hauntingly beautiful profile headshot, which I imagine to have been taken by Martin Scorsese, or he picked the background photo based on the suit he was wearing in the profile picture. No matter the reason, that level of attention to detail is the type that gets you a third shot at coaching an NBA team, so keep your eyes open for him to get the Cavs job. However, I prefer the first reason, because it means he was highly interested in including Carmelo Anthony in his background photo. I, for one, think such dedication is very sweet.

Third, his bio calls the page "The Official account of Coach Mike Woodson." Aside from the fact that he dropped the ball grammar-wise by capitalizing "official" for no reason at all, it's a bit presumptuous to call himself "Coach" considering his current occupation is "part-time analyst for NBATV." Unless, of course, he knows something we don't. I'm telling you guys: look out for him getting that Cavs job.

Fourth, he's verified already! That's impressive. I first noticed Woody's page just after 10:00 PM EST and he was verified even then. Don't try to tell me Woody can't get things done in a timely fashion.

Fifth, his location is listed as "On the Court and the Course..." Again, he's not really on the court at the moment, but he probably is on the course. His interest in golf colors his relationship with J.R. Smith, if nothing else.

FInally, his website is coachwoodsoninvitational.com. I appreciate the dedication to this golf tournament that is purportedly in Las Vegas in late July. I hope J.R. makes it out.

As of this sentence, which I'm writing at 12:11 AM, @MikeWoodsonNBA has 1,150 followers. Not too shabby for only 5 hours since his first tweet. Unfortunately, parsing that many followers to find any interesting or weird ones would take too long, so instead, I'll offer you a list of the six people I follow who also follow Woody. 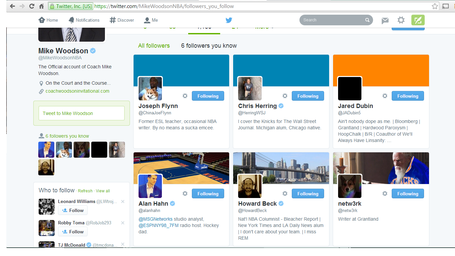 That's an amazing sextet: P&T's own Joe Flynn, along with Chris Herring, Jared Dubin, Alan Hahn, Howard Beck, and netw3rk. Conspicuously missing: Seth Rosenthal. Tsk tsk, Seth. And yes, for those of you who are curious, @MikeWoodsonPls follows him as well.

We've already taken a look at his first tweet, but let's check out the rest.

“@TheOnlyStavie8: How's it going @MikeWoodsonNBA?” Good thank you for asking

I have no freaking idea why Woody chose these two people to respond to. It's possible they were the only ones who didn't viciously attack him as soon as he popped up. I'm very amused by how exceedingly polite Mike Woodson is to these chosen randos.

Thank you @ItsBMcKnight looking forward to having you perform for us. Always been a big fan B.

Based on some retweets of his as well as this reply, it's clear Woody will be joined by none other than Brian McKnight at the Coach Woodson Invitational. Again, Woodson is adorably polite. I find it interesting that he is close enough with Brian McKnight to refer to him as "B," yet feels the need to tweet at him rather than text or call him, but what the hell do I know? I guess it's good that the world knows how close Woody and B are. The Cavs would probably find that to be important; plus, I hear Kyrie Irving loves "Back at One."

Finally, check out these two retweets: 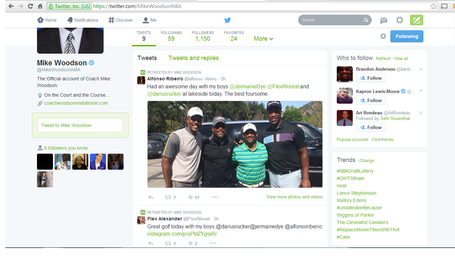 I can't explain those at all. Hilariously odd, though.

Unfortunately, Woody hasn't tweeted out any Woodyisms yet. It's only a matter of time, I'm sure.

I saved the best part for last. As of 12:36 AM, Mike Woodson follows 55 people. Among that 55 are a few NBA analysts and reporters, Taye Diggs, Kendra Wilkinson, Mike Epps, SBNation(!), Clyde Frazier, and, unsurprisingly, Brian McKnight. But I know there's only one question on each of your minds: what Knicks does he follow?

@MikeWoodsonNBA follows 6 current NBA players. Those are Chris Paul and 5 Knicks. I would imagine Woody is friends with players outside Chris Paul and the Knicks, but maybe not. Anyway, let's break down the prominent Knicks he does and does not follow.

Metta World Peace: Follows. Hilarious tweeter. Supposedly told to tone down his twitter before being bought out. Obvious choice, especially as a possible "fuck you" to Dolan.

Iman Shumpert: Follows. Shocker! Maybe Woody really doesn't hate him, though that makes his odd treatment of Shump even weirder.

Amar'e Stoudemire: Follows. Odd choice. STAT mostly tweets about religion, which is fine and all, but I feel like Woody wants a timeline full of amusement and STAT isn't funny.

Andrea Bargnani: Doesn't follow. This just about confirms that Woody was forced by CAA to play Bargs.

Raymond Felton: Doesn't follow. Ray barely ever tweets so I don't blame him.

Cole Aldrich: Doesn't follow. Woodson didn't play him enough, so I wouldn't expect him to follow the ColeTrain.

Timothy Hardaway II: Doesn't follow. You'd think based on how he let Timmy run amok on offense he'd let him do the same to his timeline, but whatevs.

That's pretty much all I have. I, uh, don't really have much to say in conclusion except that you should all tweet @MikeWoodsonNBA and lie and tell him you miss him as coach. He'll retweet you. Maybe.

@MikeWoodsonNBA hey coach! Imma huge fan and really miss having u already! Can I get a rt for some love? : )