Steve Kerr is totally about to accept the Knicks coaching job

The reports say so, and so does the ROY voting.

Share All sharing options for: Steve Kerr is totally about to accept the Knicks coaching job

Reports to begin this week lean hard toward Steve Kerr accepting the Knicks' long-standing, nigh-uncontested offer for their head coaching job. Ian Begley heard Kerr spent his free time over the weekend discussing the job (and move) with his family in California:

Kerr worked as an analyst for TNT's Game 7 broadcast of Thunder-Grizzlies on Saturday night. Following the broadcast, Kerr planned to travel back to San Diego to huddle with his family and discuss the opportunity to coach the Knicks, an NBA source confirmed.

Marc Berman hears Kerr could be ready to quit his current job and accept the Knicks' after he calls Game 1 in Oklahoma City Monday night, and he already heard from Lute Olson that Kerr's wife was on board. Unless there needs to be more talking this week, Kerr might very well announce he's taking the job live on a broadcast.

And if there was ever any doubt, I am 100% ready to call Kerr-to-the-Knicks as not just done but LOOOONG since done after seeing the Rookie of the Year votes. Check 'em: 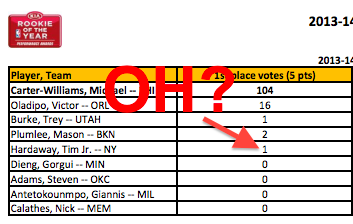 Yes, Tim Hardaway Jr. had a fine rookie season and deserved some runner-up ROY votes. No, Tim Hardaway Jr. probably did not deserve a first-place vote from any logical, unbiased person. Yes, I take this as the confirming piece of evidence that Kerr is about to accept the Knicks job. Yes, even though votes came in around the end of the regular season. There were already ample Kerr rumors by then. And it's just too perfect.

So let's get this over with, eh? And, uh...congratulations, Tim!