Kickin' it to the Curb: Amar'e Stoudemire

Share All sharing options for: Kickin' it to the Curb: Amar'e Stoudemire

Who would you rather have?

Both look pretty good, You'd probably be happy with either. Player A and player B are both Amar'e Stoudemire. The A stats are STAT's per 36 numbers his first two seasons with the Knicks. The B stats are his numbers from 2013.

Here are three more numbers: 73. 48. 17. Those are the % of possible minutes STAT played his first 3 years with the Knicks. Due to various knee issues, he only played 17% of the Knicks' total minutes in 2013, his lowest since missing 79 games in 2006 after microfracture knee surgery (as the Knicks ponder offering Carmelo Anthony a five-year max-deal with his prime now behind him, consider: Anthony played 75% of all minutes last year).

In 2013, STAT was on a "minutes limit," meaning he wasn't allowed to go over 30 minutes per game, period, until Mike Woodson decided Eff that! and went over the limit, which wouldn't lead to STAT promptly getting hurt or needing secret offseason knee surgery or anything like that.

After all the bulging disks and knee debridements, it's easy to forget that once upon a time, for the low low fee of a hundred mil, STAT was the Knicks' own private defibrillator, shocking them back to life after all the years suffering the Qyntel Woods and Malik Roses of the world. Knicks are back!

The hope last year was that Stoudemire could stay reasonably healthy and function as a super-sub. Even with all the injury troubles, his efficiency as a scorer remains, particularly as a bench option. With Melo returning as the league's scoring champ and STAT providing punch off the pine, at least we knew the Knicks wouldn't struggle on offense or end up 20th in the league in scoring. Plus, the addition of Andrea Bargnani as another scoring 4 could ease the pain of STAT's minutes restrictions while keeping alive the dream of the Knicks bringing back John Wallace and fielding the worst defensive frontcourt in the history of carbon-based bipeds.

Basically, the expectations for STAT this year were no different than the hopes and dreams any parent feels when signing their child up for the first time for sports. Have fun! Hope you like your teammates! Hope you don't get hurt! Really-- don't get hurt. Especially don't get hurt or be hurt during the playoffs. Please don't.

What Amar'e Did Well

Stoudemire has always been a great scorer, and he continued to shoot with devastating efficiency in his limited minutes this past season. STAT averaged 19 points per 36 minutes, knocking down those field goals at a 56% clip. He's a capable free throw shooter as well, despite a slight slump this year, helping him to a TS% of .596! These are superb numbers for any scorer, and indicate perhaps a little more fuel in the STAT tank than typically thought. Part of what made Amar'e so effective as a scorer was his finishing ability at the rim. He shot 68% there this past season, and his ability to score or draw fouls out of the pick-and-roll continues to make him a deadly offensive weapon. Here's Stoudemire working the 2-man game with Carmelo Anthony in April 4th's loss to the Wizards: 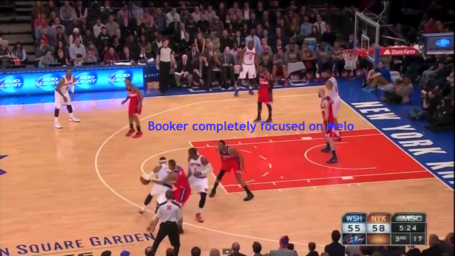 STAT sets a screen on Trevor Ariza and gives Melo the step on the gangly Washington defender. Trevor Booker, who was previously defending Stoudemire, turns his full attention towards containing Anthony and doesn't so much as stunt at the rolling Stoudemire. Melo sees the opening and throws a nice pocket pass to Amar'e as the lane opens up. This hard roll forces Marcin Gortat to rotate off of Tyson Chandler and try to stop Stoudemire: 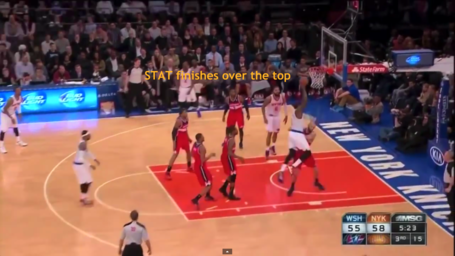 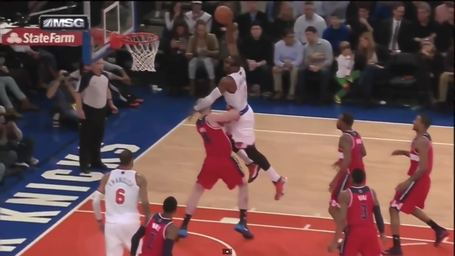 It works out poorly for Gortat. Stoudemire's athleticism helps create a high-percentage shot despite a defender walling off the rim. He may have lost some bounce since his All-Star years, but Stoudemire's combination of skill and athleticism make him one of the best finishers in the NBA. He makes great reads out of the pick-and-roll consistently, and sometimes without needing to even make contact.

Here is Stoudemire again coming to set a screen against the Sixers on March 10th: 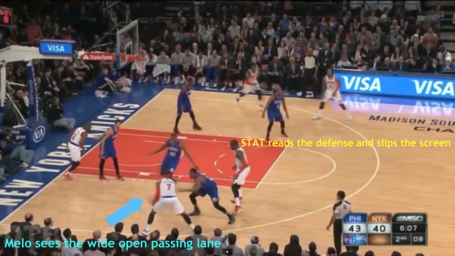 As soon as he senses the Stoudemire screen coming, Thaddeus Young jumps to the side to ice the pick-and-roll. Unfortunately for Philadelphia, Jarvis Varnado is a step slow to get into position to properly defend the action. Varnado is still sliding into position after Young has begun trying to force Carmelo to the baseline, and his mistake opens up the lane for Amar'e. STAT recognizes the opening and slips the screen early, getting a beautiful pocket feed from Melo and a nice look at the rim: 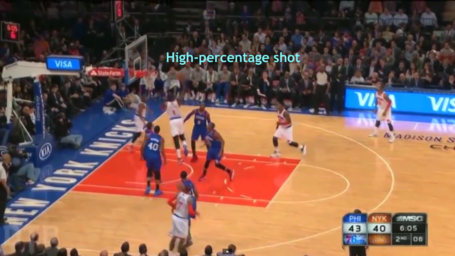 Both of these plays are set up by Carmelo, but the shots are generated thanks to excellent reads from Stoudemire. Amar'e continues to shine as a finisher in the NBA, and while he may never carve out a spot on another All-Star team Amar'e has shown this past season that he can still be one of the most efficient paint scorers around.

Stoudemire also brought great energy to the offensive glass, collecting nearly two offensive rebounds per game despite averaging fewer than 23 minutes. Second-chance points are a boon to any offense, and Amar'e helped the Knicks create opportunities for those while on the floor.

The Knikcs' scorers have helped the team to some of the best offensive ratings in the league for the past few seasons in large part due to their ability to create offense without turning the ball over. Stoudemire's TOV% of 12.3 in impressive, especially considering his relatively high usage rate.

Perhaps most important was Stoudemire's patience in rejoining the rotation. The coaching staff was cautious for most of the season when deploying him, but Amar'e's late-season entry to the starting lineup helped the Knicks challenge the Hawks down the stretch for the final spot in the playoffs in the East. From March 3rd to the end of the season, the Knicks' new starting unit of Felton-Smith-Anthony-Stoudemire-Chandler outscored opponents by 24 points while on the court. That number seems a bit flukey considering the usual mediocrity of the Melo-STAT-Chandler frontcourt, but there's no question that they found a way to make it work for the final twenty or so games of the regular season.

What Amar'e Didn't Do Well

Amar'e's problems often start on the defensive end, where he just can't stick with anyone. He's always a step slow and always blowing rotations. You can just see him thinking the game on the defensive end. Its not for lack of desire. You can see and hear his frustrations with a booming clap and an exasperated "DAMN" under the rim as the ball gets passed behind his back for an easy score. Sometimes its even worse.

Stoudemire saw 12.8 shots at the rim per game, with opponents shooting just shy of 60%. He did that while averaging 12 points a game in a slight 22 minutes per, on the year. In other words: a -6.2 net rating. In other other words: buns.

Often times, once Stat gets abused on defense, he turns around and has to prove something on offense. While he really worked on his post game over the summer and scored effectively during the season, it was sometimes a plodding and defiant brand of basketball. Amar'e stagnated an already bored-to-tears offense, and the lift he once had just wasn't there. His footwork got him places, but he was easily bottled up by his own man or a help defender. Amar'e's inability to dish in traffic, move the ball quickly, or pass out of double teams was glaring. Perhaps we can "because Woodson" some of his dysfunction on that end, but in general, Amar'e, bless his heart, was not a game-changing scorer off the bench.

For a man who's had his knees dug into several times and his back pulled every which way, Amar'e Stoudemire still offers some of the most explosive highlights of any big man in the league. At this point, Stoudemire is rarely springy enough to ever take the ball off the bounce and cram it through the net like he did in days of yore; that's just one place where age and injuries have taken their toll.

But give Stoudemire an open runway, either in transition or the pick-and-roll, and he can still elevate and smash the ball as forcefully and stylistically as ever. So, even at 32 years old, injuries be damned, STAT treated fans to several delightfully fierce jams:

And if he wasn't huffing and stuffing, he was occasionally able to provide a defensive spark by showcasing his hops by rejecting opponents at the rim. His block on Joe Johnson almost made Twitter explode because of the sheer surprise of it all.

But that's pretty much where the defensive highlights end. On his best days, Stoudemire was able to resemble -- not quite his dominant 2010-11 self -- but a younger, efficient player who was helping the Knicks win games. In the midst of a winning streak in March, Stoudemire turned in a 21-point performance over the Indiana Pacers, helping the Knicks push their streak to seven games. It was an important game for the Knicks' playoff hopes, and STAT's first-half offensive production keyed the victory.

Amar'e has an Early Termination Option, which gives him the ability to end his contract prematurely and become a free agent this summer. Basically, he's in the same boat as Carmelo Anthony. It isn't exactly breaking news when I report that it's highly unlikely STAT plans on exercising his ETO. Therefore, he'll be owed $23,410,988 next season. I love Amar'e and I think he can contribute next year, but I bet even his most ardent supporter would admit he's not worth $23.4 million at this point.

As for how he fits in the Triangle? Unsurprisingly, Amar'e thinks he'll do a phenomenal job. Though I don't know a ton about the system, I agree based on what I do know. According to SynergySports, STAT did well in both post-ups and cuts last year. His 0.91 PPP on post-ups ranked 48th in the NBA and he drew shooting fouls on a solid 13.1% of post-up plays, second-best of all his play types. However, he needs to cut down on his giveaways, since he turned the ball over on 15.3% of post-ups.

On cuts, Stoudemire scored 1.38 PPP, ranking 25th in the league. Remember how he drew shooting fouls on post-ups at his second-best rate of any play? Best was cuts, where he went to the line 17.6% of the time. His turnover rate on cuts was 8.8%, which seems high considering Amar'e probably had the ball for a short length of time on those plays.

Health is always a worry when it comes to Amar'e, but should he stay on the court, we as fans could be in for a great 2014-15 season from #tapeuno.

Amar'e was never much of a defensive presence, save for the occasional weak-side block. Never a great rebounder. Hasn't had any prolonged health worth mentioning. The kid has heart, though. Expectations were decidedly low for Amar'e, but he showed some flashes on offense when used properly. The Knicks were statistically better with him off the floor, similar to another big (hint: BARGS). All told, a surprising but ineffective season. C+