Kickin' It to the Curb: Carmelo Anthony

Share All sharing options for: Kickin' It to the Curb: Carmelo Anthony

Carmelo Anthony's 2012-13 season may just have been the best of his NBA career. He averaged 28.7 PPG (leading to his first scoring title) on 44.9% shooting from the field and 37.9% from three. He also knocked down 83% of his foul shots and pulled down 6.9 RPG. Spending most of the year at the power forward position, he held opponents to 0.64 points per possession on post-ups, good for 16th (!) in the NBA, according to SynergySports. So yeah, he had a good year.

That's not to say there weren't concerns. First, there was the left shoulder injury. The diabolical combination of David West and Kevin Garnett led to a torn rotator cuff and torn labrum in said left shoulder, though he played through it at the end of the regular season and during the playoffs. While offseason surgery seemed to be the preference among the masses, Melo ultimately decided to rehabilitate his injury without going under the knife. In retrospect, this was the right call, but it was certainly debated at the time.

Second, there was the Early Termination Option. Anthony's ability to opt out of the final year of his contract has been hotly debated and will be discussed later in this post, so I won't belabor it here. However, it's important to note that even in the preseason, Melo's pending free agency was being dissected. Of course, back then, the prevailing thought was that, should he leave New York, Carmelo would be heading to the Lakers. As Clyde would say: "haHAAAA!"

Regardless, expectations were high for both Carmelo Anthony and the Knicks coming into this season. Unfortunately, only one of the two would come through. Spoiler: it was Melo.

What Carmelo Did Well

Carmelo played more minutes last season than any since his rookie year, setting personal Knick season highs in FG/3P/FT% despite only a career-low 19% of his shots coming within 3 feet the hoop. Advanced stats get you hot? He set career highs in win shares (click here for a breakdown), rebounding %, assist %, steal % and block %. His turnover rate was the second lowest of his career. Admit it. You don't even care about the low turnover rate. You wanna know if you made it. You did. You're on the list. The Melo Block Party List.

Carmelo did everything as well, if not better, than he ever has. Whatever your thoughts on keeping him or losing him, it was one of the top 3 seasons by a Knick in the last 20 years, along with Patrick Ewing's 1994 and Amar'e Stoudemire's 2011. If you donated your eyeballs to science last year and all this wasn't already obvious, there's more evidence: the Knicks were +1.2 with Anthony on the floor, his lowest plus/minus since 2006...yet the differential between him on the floor versus off was a staggering +9.0. Translation? Watching Melo, Knick fans be like:

Watching the other Knicks?

What Carmelo Didn't Do Well

Carmelo didn't do too much wrong this past season. As M.M. alluded to above, he probably just had the greatest individual season of his career. Still there remain nits to pick about Melo's year, and it starts with the same criticism he's faced since coming to the NBA.

Carmelo Anthony isn't a very good defensive player. He's capable, and sometimes that's enough. But it's difficult to look at the Knicks' struggles to build a consistently sturdy defense and absolve Melo of all blame. New York's defensive weaknesses with Melo on the court have been fairly consistent since he arrived in that fateful trade back in 2011: 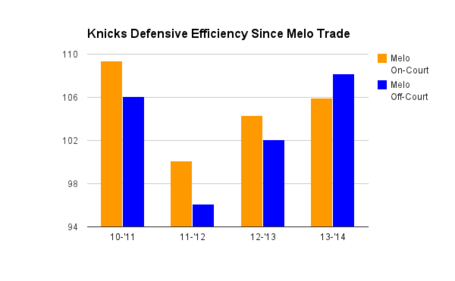 Couple things here. First, can we step back and remember that one year when the Knicks were really, really good on D? That actually happened. Second, it's fascinating how the Knicks' big man rotation this season boosted Melo's defensive efficiency numbers. The combination of losing Kenyon Martin to injury, the health of Amar'e Stoudemire, and the trade for Andrea Bargnani helped to give Carmelo his first (only?) season in New York wherein the Knicks were actually better off on D with Melo manning the 4. Still, it would be silly to say that Melo is a good defender now because he was able to outplay Stoudemire and Bargnani on defense. Melo's a decent team defender; he's tough and probably gets away with more fouls in the lane than he should. But he forces few turnovers, isn't a rim protector, and still gives up on plays at times.

Another notable area in which Melo struggled was his late-game execution. This was largely a result of the awful shots the Knicks offense drew up for him, but some of the fault rests on Melo's shoulders. Superstars are expected to hit the big shots. That's part of the reason they're seen as superstars. Carmelo, despite his star status, just couldn't come through for the Knicks down the stretch with the game in the balance. In the final three minutes of games with the score differential within 5 points, Melo shot 32.4% from the field this past season. In the last 30 seconds, that FG% dropped down to 4.8%. That's not a typo.

This leads to perhaps the most ominous flaw in the star aura of Carmelo Anthony: What if he just isn't that good? Like, he's good. We all know he can put on a show. Melo is a star. But if this stands as the best individual season of his career (spectacular scoring, mediocre defense, and little obvious benefit in crunch time, few notable qualities outside of these) then perhaps Melo just isn't as good as he is so often assumed to be. This season both showcased much of what makes Carmelo great and some of what keeps him from being truly elite.

While Carmelo may have been snubbed for individual awards as a result of the team's record, he balled out of control this season, compiling some of his best counting stats ever. When a guy is this good, a few individual highlights don't exactly do justice. Melo put together complete games as highlights. Submitted for your approval:

This 44-point double-overtime doozy against Orlando...

I remember this puppy because I had to watch in some hell hole in Park Slope by pathetic myself. There were two other guys watching, one was in love with everything the Knicks did (he was cool), the other guy was stoic and refused to look at or talk to me. I didn't mind. I mostly stayed quiet, but at one point I criticized Mike Woodson's play calling (a 24-second clock milking iso-Melo out of timeout). The lovey guy screamed "Yea why's he got them doin' that?!" and the stoic guy grumbled that I need to "Shut the fuck up real fast." Which was an effective thing to say.

got cursed out by some dude who likes woodson

not cursed so much as threatened

I was a bit confused, I hadn't said much leading up to that, and the rest of the way I just watched and smirked at this dude as the Knicks pissed that one away, remiss to run through any sets or plays down the multitude of stretches a double overtimer might offer. Pretty sure we can put that loss on the stoic Woodson apologist in the front of Smith's Tavern. Yea, you! It clearly wasn't Melo's fault, bobo.

Anyway, what were we saying? Ah yes, this 29-point, 16-rebound effort in a win over Phoenix had all the gradients of Melo beast-mode-moments in concert with each other. Unfortunately we had another game the next day... "shit".

That game was truly a microcosm of his year, and sort of defined the soup Carmelo was cooking. He was moving fluidly, rebounding aggressively, scoring effortlessly, and making the little plays that look so pretty it can be dizzying. He really and truly had one of his best seasons as a pro. It was so cool! Too bad the rest of the team just wasn't participating.

Melo also had some record-setting moments. In a season where everything kinda sucked the sucking out of suck, we should take care to recall the good stuff. Like his All Star game performance:

When its all said and done, however, the "moment" we'll always remember is when Carmelo just got instantaneously red hot, and pummeled the hapless (that evening) Bobcats from start to finish. This game led to him setting the Knicks scoring record at 62 points, dropping Bernard King from the top spot. It was like we were watching him articulate everything in a lucid basketball dream. Even if you were a Charlotte fan, you'd have to give it up for this. He was just unstoppable.

Gonna miss him next season. Gonna boo the shit out of him too.

This is certainly the hot topic these days. Carmelo Anthony's future with the Knicks has been in doubt since the start of last season when he said he intended to opt out of his contract this summer. And he's going to do that.

Now it essentially becomes a battle between Melo and the Knicks. Phil Jackson has publicly stated he's talked to Melo about taking less money to help the Knicks build a more solid team. Anthony has said money ain't no thang, but it'd be tough not to bargain for a supermax of five years, $129 million, which only the Knicks can offer him. If the Knicks can convince him to take less, then they had better convince him that there's a brighter future in New York.

And if Anthony decides he totally wants to leave, then the Knicks have to try and get something in return for him. The Knicks can still offer Anthony more money than other teams, which makes it a little easier for them to try to initiate a sign-and-trade for assets in return. If Anthony is leaving to try to compete for a title, the teams close to such a feat don't have the money to sign him outright. The Houston Rockets and Chicago Bulls have both been said to be interested in Anthony's talents, and for the Knicks, both teams can offer a lucrative return in rotation players, youngsters, or future draft picks.

My personal preference/hope would be for Melo to take less, re-sign with the Knicks long-term, and leave room for them to sign a second star in 2015 and build a proper supporting cast. But that's just me. There are several strong arguments for signing and trading Anthony for a crop of youngsters and assets or letting him walk for free or signing him to a max or cloning him 14 times and changing the Knicks to the New York Anthonys and fooling James Dolan as to which one is the Real Melo. Basically, whatever happens happens, and I think there are positives and negatives to whatever Melo decides to do.

What more can be said? Carmelo Anthony is pretty freakin' good at basketball, but unfortunately, he couldn't drag this sorry bunch all the way to the postseason. A-.