BOTH! NEITHER! MMiranda and stingy d debate.

Share All sharing options for: Point, Counterpoint: Should Carmelo Anthony stay or go?

SHOULD MELO RE-SIGN? OR LEAVE?

MMiranda: Depends. What does he want? I'm not sure anyone is sure yet, including Melo. If he cares most about winning a ring, he should opt out and leave. If he cares most about breadwinning, he should opt out and sign with the Knicks. If he wants the best of both worlds, opt out and force a sign-and-trade--Miami, Chicago, even Houston are better choices, and after factoring state income tax rates, Melo's net pay in Florida, Illinois, or Texas would be 4 years/$55M, vs. 5 years/$66M in New York. Is $11M worth the cost of continuing to place your faith in this franchise? And when I say "franchise," I mean "Dolan," because he's the only guaranteed constant with the franchise.

But what if Melo likes his life? What if he, like millions of people, likes living and working in NYC? What if his family's happy being there, too? What if, like most of us, he's not focused on his "legacy" or what other people may say about him? What if he's 29 and always wanted to play in the Mecca, and that dream came true and now he can probably get $130,000,000 to keep dreaming? If Seth offered me $130M to write for P&T and FOX, ESPN and Sports Illustrated each offered me $95M, you know what?

Lastly: if Melo re-signs with the Knicks, they'll be paying top dollar for his post-prime years. Would you rather max out All-Star X when he's 25-30 or Melo when he's 30-35? A trend to consider: Melo's moved further and further away from the basket over his career; last year a career-low 19% of his shots came from 0-3 feet. Compare that to LeBron and Kevin Durant (the LeBron and Melo %'s are biannual; KD came 4 years later, so his numbers are annual). 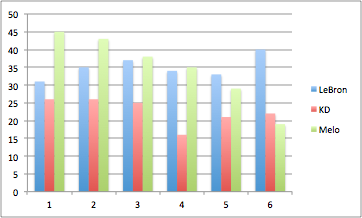 As he gets older and the hits and injuries pile up, this trend's unlikely to reverse. How many thirtysomething perimeter groupies are max-level guys? Buyer beware: Amar'e Stoudemire has pretty gracefully handled his rapid fall from MVP chants to albatross. I'm not sure the Fall of Melo would be as smooth.

Stingy D: There will be no such fallout with Melo! Thats that jive talk. He's a Jordan Brand, Kobe System MVP Caliber Caliper. Trust me, papa! Opt out, and re-up. One year deal, 1 billion bucks (or let's call it max allowable). Get that fetti, and come back to the table when money isn't an issue. Thats all we ask, gorgeous. La-la-look here, beautiful, you forced your way to New York for a reason. Everything broke the wrong way la-la-last year, but you can't seriously think we're as bad as the season pretended we were. SCHOENE ‘nuff.

Now that Phil Jackson is here to bridge the gaps from old to new, from blue to true, from all of New York to you- give us one la-la-last chance to prove our P(rofessionalism) is tight enough for your D(ick). Take this huge pie, eat as much as you can, and lets talk when there's something worth gabbing about, tiger!

Listen here, you nut, you look fantastic! Orange and blue, with "New York" across the chest is a debonair outfit, if I may say so myself! Opt out, and get your numbers and crazy amounts of loot one last time, Carm.

IF MELO LEAVES, WHERE SHOULD HE GO?

S: So, its like that? Aight bet, be out son. Get gone. Go to Miami, bum ass dude. Take that weak minded, ambitionless, fairytale garbage to the end of the earth with you, pookie. Go get hated. Be scared of a challenge. Be that corny dudewho suckled the teet. Lick that championship taint, man. You're wack.

Go play in Houston with that dweeb. I bet you love standing around waiting for the ball too. Fear that beard. Go to Chicago, I'm sure you'll be considered the next Jordan Farmar as soon as you land at O'Hare. Just get outta here, b. Don't come around here no more either. You not welcomed. Sold us out to get you here, and sold yourself out to leave. No coming back from that.

In all seriousness though, Phoenix is a perfect fit. Stretch four from the heavens above, in a high octane offense, with the ball moving, and everyone running. Trot your hefty behind into the secondary break's wide open threes all year, fam. I'm done with this guy.

MM: Basketball junkie-wise, if Melo leaves, the Suns would be an immediately entertaining fit. I could see him having a similar impact there to Charles Barkley's in 1993. Phoenix can afford to give Melo the max, re-sign Eric Bledsoe, and STILL have max space space next year. He'd get the chance to play with two great point guards, or two more than he's ever played with in NY, and his inside-out game would beautifully complement jump-shooting bigs like Channing Frye and Markieff Morris.

Chicago kinda makes no sense to me. You read a lot that he "admires" Tom Thibodeau. Well, who doesn't? Actually, there's the rub: Chicago ownership seems less enamored with Thibs than the rest of the NBA; there's been talk of strife and a potential split for a years. Committing to the Bulls because of Thibodeau seems a risky star to hitch one's wagon. Even if Thibs signed on long-term, what's the draw? Compared to Derrick Rose, Amar'e Stoudemire is Cal Ripken; I can't see Melo committing to the Bulls for 2014-2018 because of what Rose looked like in 2010. Plus, with all Chicago would have to give up to afford Carmelo--some combination of amnestying Carlos Boozer/moving Taj Gibson/trading one of their 1st round picks (16 or 19)/moving Jimmy Butler/moving Mike Dunleavy Jr.--it'd be a Pyrrhic victory if they did get him. And you know what they say: fool me into joining a wanna-be contender by trading half your roster for me, shame on you. Fool me twice...

Houston? We live among parallel dimensions, string theories, alternative realities, event horizons...all kinds of mind-bending truths. I cannot see a single dimension, string, reality, or plane of existence where Carmelo Anthony plays for the Rockets. It's possible this is only because I never got over 1994, or the Jeremy Lin debacle (PREACH, Fuhry!), and because it'd make almost too much sense, and because I don't want to think about how much sense it'd make.

As for the nightmare Knickdom fears above all...Miami makes the most sense. They need an infusion of talent. They need a legit #2 guy, one who lets Bosh and Wade slot down to the 3rd and 4th best players on the team, who'd alleviate some of Lebron's burden. After a Finals that exposed the toll the Heat's frenetic defense the past four years has taken, they may add a rim protector and evolve their frenetic blitzing style of D to something more mellow. And who's more mellow on D than Melo?

MM: Goodbye and good luck, Melo. It's not about you. It's about us. It hurts today. It'll hurt tomorrow. In the long run, though, breaking up's for the best.

S: I truly believe that Carmelo can be the number one option on a championship contender. The Knicks as currently comprised- from the roster, to the salaries and everything in between- are not successfully built around their top guy. We have a chance to re-load for the near and far future, but patience is the virtue we'll need.

On the flip side of life, though- Stingy don't suffer no punx. So am-scray, dorkus. Once a Knick, always a pain in my ass.