Stein: The Knicks will probably try to hire Derek Fisher this week

Things are "ramping up!"

Share All sharing options for: Stein: The Knicks will probably try to hire Derek Fisher this week

It didn't take long after the Thunder got eliminated for Derek Fisher to become the Knicks' new Steve Kerr. Phil Jackson wants Fisher as coach, and when Phil Jackson wants a guy as coach, no one else exists (until that guy heads elsewhere and you move down the list). It's not unlike elementary school romance, actually. Here's where things stand with all that.

After last week's phone call, Marc Stein reports the Knicks will "ramp up" their pursuit of Fisher this week, and we're even starting to get vibes that that a deal could get done very soon. The Lakers once looked like the Knicks' competition for Fisher's services, but that seems like less of a match these days, so the primary obstacle is whether or not Fisher wants to stay in his current job as basketball player. Some pretty final-sounding words have been spoken on that topic, but nothing's stopping Fisher from turning back to play another year or two if he pleases. (Side note: If Fisher does take this job and the Knicks don't improve their own guard situation, it'll be funny to watch a guy who might help them on the floor pace the sidelines in a suit.)

If last week's Berman report about Jackson wanting to hire a coach before he heads to Turkey for his son's wedding is to be believed, then the Knicks will probably try to hire Fisher this week. In the meantime, everyone else is getting the stiff arm. Luke Walton's phone isn't ringing, I've seen nothing about previously rumored candidate Tyronn Lue, Bill Cartwright hasn't heard anything since he interviewed to be lead assistant, and Ric--- well, I'm sorry, Rick Fox, but I don't really think you were ever part of this. Please go back to your seat alongside Chris Mihm and Smush Parker.

So, once again, all arrows point at one candidate, and now that candidate is Derek Fisher. The situation with Fisher is nearly identical to the previous situation with Steve Kerr. A Knicks hire seems inevitable, but there is some sideward pull of unknown magnitude. The Warriors seemed to drop out of the Kerr picture right before they lunged back into it, so I hesitate to dismiss the Lakers job or another year as a player until contracts are signed.

Here, I made a chart: 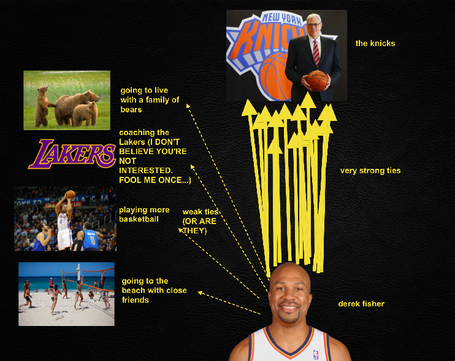 That's pretty much how things are until we're told otherwise. Last time this happened, we got told otherwise, so let's wait and see.