How will Carmelo Anthony's contract affect the Knicks in the future?

A comparison of the pay cut Melo took to other possible contracts and how each option would affect the Knicks' cap.

Share All sharing options for: How will Carmelo Anthony's contract affect the Knicks in the future?

As you probably know by now, Carmelo Anthony has returned to the Knicks on a 5 year, $124 million deal with an Early Termination Option after year 4. Frank Isola also says, with the requisite snark, that Melo has a no-trade clause. I'm sure the first thought in many people's minds when they see that number is "Well, that's not much of a paycut at all!" Of course, you'd be right. The issue is that the assumption for those same people is often that a larger cut would be a huge help with respect to the Knicks' cap space next summer. However, that's not exactly the case.

Based on the reported $124 million number, I'd guess Melo's contract looks something like this:

Let's take a look at the Knicks' current cap situation without Melo (or Jason Smith, who won't affect anything I'm doing since he's on a one-year deal) included. By the way, a good thing to have on hand while reading this is Larry Coon's Cap FAQ. I'll attempt to explain my process to the best of my abilities, but I learned pretty much everything I know about the salary cap from that site. All of the salary figures I'm using come from ShamSports. I apologize for my terrible MS Paint skills.

Here's what the Knicks' cap sheet looks like with Melo included. 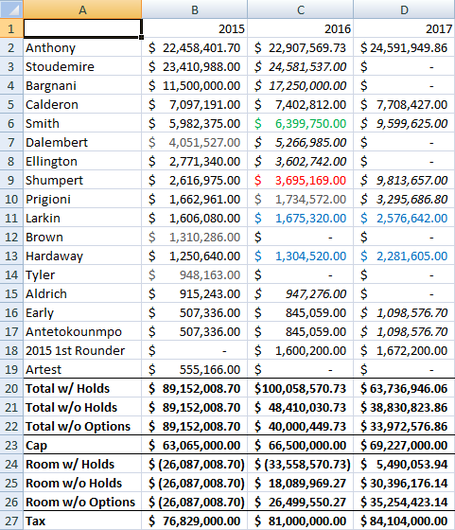 Assuming New York renounces every one of its cap holds, the team will have about $18 million in cap room next summer. They could go even further by refusing to extend Shump a qualifying offer, waiving Pablo, and not picking up the Team Options on Larkin and Timmy. This would give the Knicks almost $26.5 million in space. However, if I were a betting man, I'd say only Pablo gets sent packing of that quartet, which would amount to about $20 million in cap space. (To get that $20 million, I'm just adding Pablo's $1.7 million in unguaranteed salary to the $18 million the Knicks could have if they renounce their cap holds and rounding it from $19.7 million to $20 million. I'll be doing that same thing a few more times throughout the article.) It hurts me as much as I'm sure it hurts all of you to suggest that Pablo won't be a Knick forever, but I'm trying to be realistic.

$20 million in cap space is certainly enough for a max salary free agent if that's what interests you. More specifically, it's enough for Marc Gasol (who seems to be at the top of fans' wish lists). A max contract for him would start at $19,950,000 (30% of the projected salary cap) because he has between 7-9 years of NBA service. Blowing all of the cap space on one player may not be the most prudent use of it, though. Further, signing Gasol would also take some Daryl Morey-style cap manipulation unless the Knicks don't plan on matching an offer sheet for Shumpert.

In 2016-17, the Knicks could have up to more than $35 million in cap space, but that would leave only Anthony, Jose Calderon, and the 2015 1st Round pick on the roster. (It's also worth mentioning that since Larkin and Hardaway have 2-year Team Options, both years must either be picked up or waived by next summer. So, really, it's much more likely the Knicks will have the ability to clear up to about $30 million in space and have 5 players on the roster instead of 3.) Kevin Durant is a free agent that summer, and I would certainly be willing to jettison any cap holds to sign him. However, if Marc Gasol is on the cap as well at a max contract, the Knicks will have closer to $10 million in space, which would not be enough to sign Durant. That's certainly something to consider. There's also the option of signing more players on smaller contracts, which, again, may be more prudent than spending all the cap space on one or two max players. Keep in mind that, by dipping so far below the cap, the Knicks will forfeit their ability to use the Mid-Level Exception and the Bi-Annual Exception. Once they've exhausted their cap space, they'll be stuck signing minimum contracts for the remainder of the summer unless they use the Room Exception, which is reserved for teams who dip below the cap then go back up to it.

I'm sure you're wondering at this point what difference the pay cut Melo took really made. Well, I can show you! This is what a full max contract would have looked like:

And here's what it would've done to New York's cap sheet: 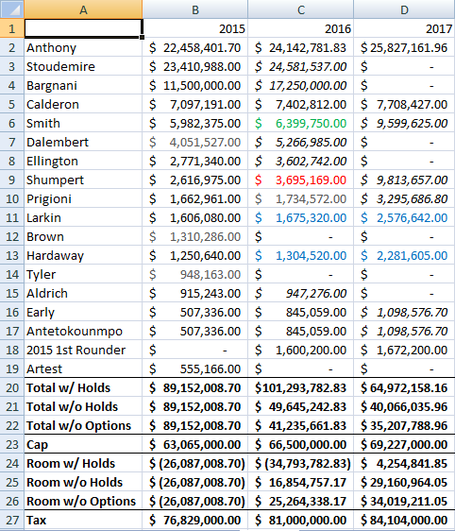 A full 7.5% raise in 2015-16 would leave the Knicks with less than enough for a max contract if they renounced their cap holds, though waiving Pablo's unguaranteed salary would probably leave them with just enough. So, as Phil Jackson said, Melo did exactly what he asked. (Ignore the incorrect contract amount in there.) By accepting a smaller raise in year two of his contract, Melo opened up max cap space for the Knicks in 2015-16.

One thing I mentioned at the very beginning of this piece is that a larger pay cut might not have changed much for the Knicks. To illustrate that point, we can also take a look at how some commonly suggested pay cuts would have affected the cap sheet. First, the widely requested 5-year, $115 million contract where Melo takes a 7.5% pay decrease in year 2.

Just as with the contract Melo actually took, the foregoing of a maximum increase in 2015-16 leads to less money in each subsequent year. This is what the cap sheet would've looked like: 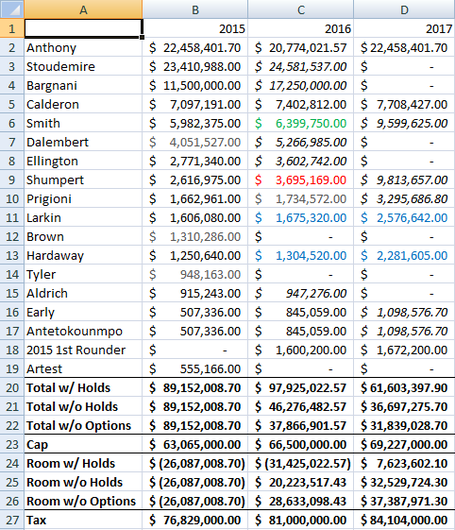 Renouncing every cap hold for 2015-16 would give the Knicks more than $20 million in space; waiving Pablo would push that number close to $22 million. If New York were to use $19.95 million of that space on Marc Gasol, they would have about $2 million left over. The BAE is projected to be $2.14 million in 2015-16, which means the Knicks would effectively be working with a bit less than the BAE after signing Gasol. The Room Exception is projected at $2.81 million for 2015-16, so the extra $2 million means almost nothing. This contract would also only give the Knicks $3.5 million extra in cap space for 2016-17; that's basically the mini-MLE.

People have also suggested that Melo take a 5-year, $100 million contract. This would be a pretty large sacrifice for Anthony.

Here, Carmelo would be taking a 7.5% decrease in both year 1 and year 2 and gets smaller raises since he started at a lower salary. I realize the total value of the contract is still more than the max he could get from the Lakers or Bulls, but the AAV of the contract is about $4 million lower than either of those hypothetical contracts due to the extra year. Let's see how this contract would've changed the cap sheet. 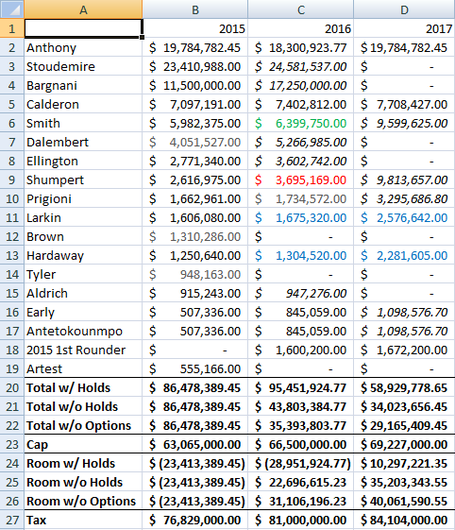 Basically, if we assume the Knicks are planning to sign someone to a maximum contract next summer, Carmelo Anthony would have to take an even bigger decrease than any I've looked at so far. Not even Melo's most vocal opponents have suggested he take a contract smaller than 5 years, $100 million. To do so would be a huge risk for Anthony, as he would be sacrificing upwards of $30 million and hoping that Phil Jackson can put together a championship team. I have faith in Phil, and I'm sure Melo does as well, but that's a huge ask. Phil says Melo took the pay cut he was asked to take, and I trust that he's telling the truth. Let's celebrate the fact that Carmelo Anthony is still a Knick and appreciate that he took less money than he could have. A larger pay cut wouldn't have changed much anyway.