Share All sharing options for: Hey, look, it's the Knicks Christmas jersey

Hi! I'm awake. I am totally awake. The Knicks don't play in Summer League again until Thursday night at 10 PM EST against either Denver or Dylan Murphy's D-League Select.

In the mean time, Uni Watch just leaked the NBA Christmas jerseys, and they're actually kinda cool this season. ENHANCE: 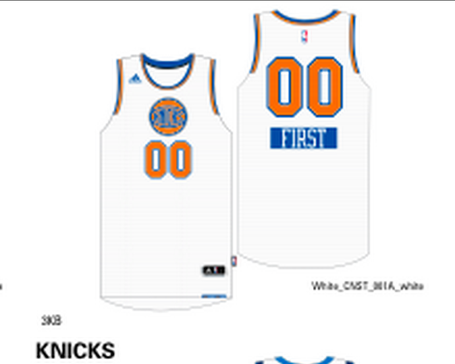 Anything would be better than last year's (no sleeves!), but I actually like these. They're not that far off the normal home jersey, but they've got the alternate ball logo (which I like) and the dropped nameplate with the *first* name featured. FIRST! If the Knicks do end up playing on Christmas, we will see jerseys that say "Pablo," "Amar'e," maybe "Cleanthony" and "Thanasis" and hopefully "Melo" and "Shump," because I think this should go not precisely by first name but by the name people actually use. Also, "Andrea." Shit, I might actually buy a #9 "Pablo" jersey if it becomes available.