A beautiful, unseen painting from the end of Clyde's career

Doug Johnson is a legendary illustrator most prolific in the '60s, '70s, and '80s. You might recognize his work from some famous Judas Priest album covers.

Our dear P&T friend Norman Hathaway visited Johnson's studio last week and the two were rummaging through storage when they found this: 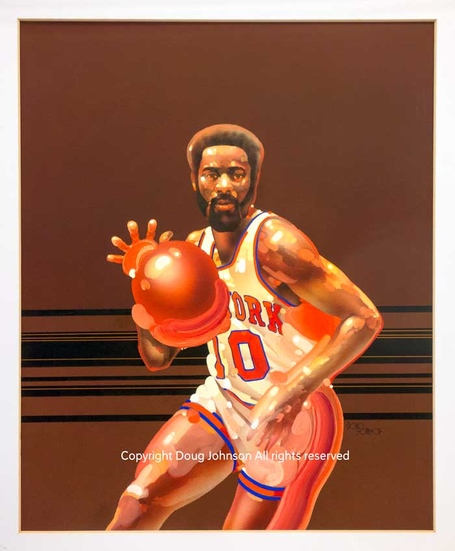 A little background from Norman:

Time used to commission covers with very little notice - 2-3 days maximum - sometimes overnight. He was excited to be asked to do one (by art director Irene Ramp) and completed the painting. They called the next day and said it wouldn't be used for that week's cover, but not to worry as they were definitely going to use it. A bit more time passes and they say still planning on using - but Clyde's career wasn't doing so well, so they had it on hold for the time being. Sadly it never saw the light of day, and until now no one else has ever seen the painting.

Johnson told us the date on this was "1979-80 or earlier." Since Frazier is still in a Knicks jersey, I would guess it's from around 1977, the twilight of Clyde's career and right before he got traded to the Cavaliers. Given the timing, it makes sense that Time would never have used the cover, but daaaaaaaamn did they miss out with this one.

Many many thanks to Doug and Norman for sharing this with us.