Derek Fisher knows a thing or two about three-pointers. Might that actually help the Knicks focus on guarding the arc this season?

In the beginning, there was field goal percentage. Players made shots, players missed shots, and the nerds crunched the numbers. High is good, low is bad. Any defense worth its salt focused on contesting shots, keeping their opponents' field goal percentage as low as possible.

If you watched the New York Knicks last season and possessed even rudimentary math skills, you probably already guessed that the fellas in orange and blue gave up a high field goal percentage to the opposition -- 45.8 percent, good for 19th in the NBA.

As it turns out, the Knicks have been quite consistent when it comes to opponent field goal percentage -- the 2012-13 squad surrendered that exact same 45.8 percent. Yet that club managed the impressive feat of fielding a defense falling just a shade to the wrong side of mediocre (106.3 defensive efficiency, 18th in the NBA), while last year's edition was a winter-long snuff film (109.1 defensive efficiency, 24th in the NBA).

Last year's club did best their division-winning predecessors in one way -- the 2013-14 team forced a lower field goal percentage on two-pointers (49.6%) than in the previous season (49.8%). HUZZAH! It was certainly tremendous news...so long as there were no basketball shots worth more than two-pointers. 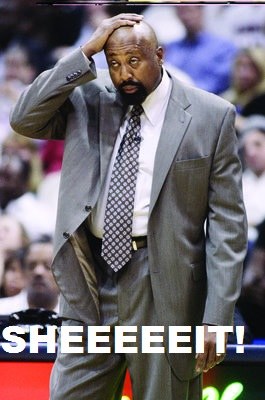 The Knicks picked the wrong moment in NBA history to completely give up on guarding the three-point line. The 2012-13 club held opponents to a perfectly average 35.7 percent from beyond the arc, good for 15th in the NBA. Compared to their successors, however, that team was a dynamo of perimeter D. The 2013-14 Knicks finished 27th in the league in opponent three-point percentage (37.1%) and 28th in made three-pointers per game (8.7). It will probably come as little surprise that the few teams to finish behind New York in either statistics all failed to make the playoffs.

New York was so generous in the corners (39.9 opponent shooting percentage) that they managed to give up a slightly higher effective field goal percentage on corner threes (59.8%) than from the restricted area (59.7%).

Yet again, these statistics more than pass the eye test. How many times did the Knicks leave shooters wide open in the corner? How many times did they rush a double-team at some random scrub big man from one pass away? And was any sight from last season as consistently infuriating as watching a New York defender lamely closing out on a open shooter from 15 feet away? They would have been more effective adopting the reverse-psychology approach -- just shrug the shoulders and walk away, mumbling, "Go ahead and hit that three, bro. See if I care."

We'd all like to believe that next season's club will do a better job of tamping down that field goal percentage -- both inside and outside the arc -- but let's face it: This is still a very Knicksian D. All we've done on that end of the court is swap Tyson Chandler's beard for Quincy Acy's beard. Since the Knicks aren't likely to field a stronger defense, it will be up to head coach Derek Fisher to guard the three.

Judging solely by Fisher's offensive output during the last few years of his playing career, the Knicks might have found the right man for the job. We might not know much about Derek Fisher, coach, but we do know that Derek Fisher, guard understood the value of the three-point shot all too well, riding out the end of his career in Oklahoma City as a modern three-point gunner. In 2013-14 the 39-year-old vet launched 229 shots from outside the arc against a mere 132 shots from within. If a dude with those shooting numbers doesn't understand the value of the three-pointer, said dude shouldn't be allowed to coach...or vote, or even drive a Segway.

Compare that with Mike "East is Big" Woodson, a shooting guard who attempted just a few more three-pointers over his entire 11-year career (443) than Fisher did in his last three seasons (418). We learned all too well last season that Woodson was totally unwilling to move past the basketball ideology he grew up with -- a 15-footer is more dangerous that a 24-footer, and even a scrub backup big man must be allotted two defenders.

Now, the Knicks do have a few old fogeys on the current staff in Jim Cleamons and Kurt Rambis -- failed coaches very much of the conservative, Woosonian model -- brought in to advise the first-year coach. That's all well and good, but when it comes to perimeter defense, I hope he is very much his own man, and that he's learned some valuable lessons from the end of his career. NBA games are often won or lost from beyond the arc these days.

I'm not looking for some revolutionary defensive system from Fisher; I'd just like to see a Knicks coach acknowledge the value of the three-point shot in the modern game, and plan his defense accordingly. You see that dude in the wrong-colored jersey standing in the corner all by his lonesome on offense? He's not clearing out for a Melo iso...Melo doesn't even have the ball! He's standing there because his coach would like to get him a shot. NBA teams want their players to take corner threes nowadays...so maybe guard that dude.

Furthermore, some players are, in fact, better at shooting threes than others. You might want to factor this into your defensive gameplan as well, Fish my man. If a guy is shooting 40 percent from behind the arc, make sure your defense does not help off him. Beg, cajole, threaten your players to fight over screens in order to run that shooter off the line.

I cannot stress enough how badly the 2013-14 club failed in this regard. Either the team never compiled scouting reports on opposing shooters or they ran out of toilet paper before each and every game, because they treated even the league's elite gunners with the same casual neglect that other teams showed Andrea Bargnani.

Check out this list of players who hit the most threes against New York last season. Given the ridiculously small sample sizes, you'd think the list would be littered with random dudes who simply got hot for a game or two. But that didn't really happen. The only players with a 2013-14 three-point percentage below 34 percent in that top 30 were Brandon Knight, Luol Deng and Mike Scott.

Whether it's a superstar like Steph Curry (11 threes in two games) or known three-point assassins like Kyle Korver (11 threes, four games), Marco Belinelli (seven threes, two games) or even new Knick Jose Calderon (7 threes, two games), these are players that must be accounted for from the second they step to that line. Instead, the Knicks -- usually courtesy of a blown defensive assignment or Ray Felton backing off a good five feet -- simply invited them to shoot.

My absolute favorite name on that list is former Laker Jodie Meeks, who decimated the Knicks with 10 threes in just two games. I can just picture Woodson shaking his head after each game: "Jesus, D'Antoni just kept letting that kid chuck threes...how could I have possibly seen that coming?"

If you're reading this, Coach Fisher --and I assume you are -- I hope you see this coming. Opposing shooters are going to test the Knicks' perimeter D whenever possible next season. Please do all you can to make it at least slightly difficult for them to do so.