The W-Knicks got *rights* to all these players, not necessarily the actual players.

Share All sharing options for: Here's who the Westchester Knicks got in the D-League expansion draft

Tuesday was the Westchester Knicks' expansion draft. Preexisting D-League teams protected 12 of their players apiece, and the W-Knicks had the opportunity to snatch the rights of up to two players per team. Today, Westchester released their list of picks.

The selected players comprise Westchester's 2014-15 Returning Player List. If the players sign an NBA Development League contract for either of the next two seasons, Westchester will have right of first refusal, giving the Knicks rights to players for two seasons.

So, this doesn't just mean all these guys are automatically on the W-Knicks. *If* these guys sign a D-League contract (which is-- I believe-- a general thing, not specific to a team), then the W-Knicks have the right to claim them. Keep that in mind when you look at THE LIST: 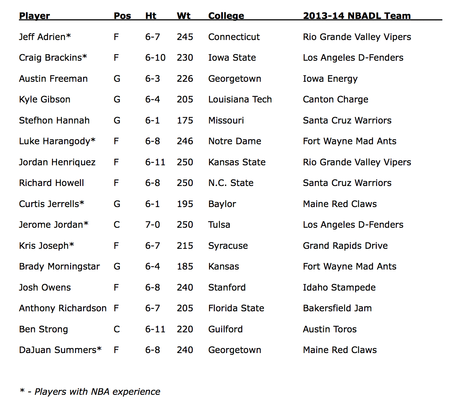 So that thing I mentioned above is most important when looking at a guy like Jeff Adrien. Adrien is awesome and I'd like him on the *actual* Knicks, let alone the W-Knicks, but he's on a fresh, guaranteed contract with the Houston Rockets. The only way he'd end up in Westchester is if the Rockets cut him and he chose to sign in the D-League, which is unlikely.

The same goes for guys signed overseas, of course. I don't know what the foreign contract statuses of guys like Craig Brackins, Luke Harangody, DaJuan Summers, Kris Joseph, and Jerome Jordan(!) are, but they won't be W-Knicks unless they return to the D-League.

Meanwhile, Stefhon Hannah is a former two-time D-League DPOY who's worked out for the Knicks before, and we remember Jordan Henriquez from Summer League. And I remember Brady Morningstar as both my favorite decent college player with a veggie burger brand for a last name and as the guy who did this:

Anyone else stand out to you?