Share All sharing options for: 2,015 Questions- #1707: Can the Knicks finally beat the Rockets?

Other basketball teams...they're the worst, amiright?

As one might expect, fans of the New York Knicks tend to focus their hatred on teams in the Eastern Conference, on rivals who have built up years worth of enmity both in the regular and postseason. (Yeah, I'm looking at you, Charlotte Hornets. You think I didn't notice you sneaking back into the club with that purple-and-teal getup?)

There is, however, one club west of the Mississippi which consistently draws Knicks fans into fits of apoplectic rage, despite the fact that the two clubs play each other but twice a year. That team is the Houston Rockets.

For the older fans, the '94 Finals still casts a pall over this rivalry -- but make no mistake, there have been plenty more contemporary excuses for Knicks fans to loathe this franchise.

The contempt factor starts right at the top, with GM Daryl Morey -- a soulless monster who kind of resembles the creepy giant baby from the MTV series "Aeon Flux", which used to haunt my nightmares as a child. 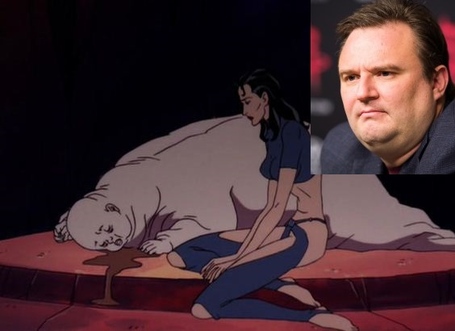 To be honest, Morey's well-documented failures this summer gave me more joy than the Knicks re-signing Carmelo Anthony. As much as I love Melo, my joy was tempered by worries over the size of his contract and roster construction moving forward. But watching Morey give away a first-round pick to the Lakers to offload the notoriously back-loaded Jeremy Lin contract so he could lure Chris Bosh, only to watch Bosh re-sign with a non-contending Miami team was pure schadenfreudey goodness.

On the court, Houston is the rare high-scoring, fast-paced club that is tough to watch, thanks to the dynamic duo of Dwight Howard and James Harden. They are great players, they'll win a lot of games...but screw both of them.

And if you're still finding it difficult to hate the Rockets, dear Knicks fan, ask yourself this: Can you even remember the last time the Knicks beat them in a basketball game?

It's been a while. New York is currently rocking a nine-game losing streak against those red devils from Texas. Their last victory came on January 26, 2009, when they rode double-digit scoring performances from the likes of Chris Duhon, Al Harrington and Tim Thomas while holding Tracy McGrady to only 20 points. That's right, kids: Knicks legend Tracy McGrady once played for Houston!

Simply put, the Rockets have owned the Knicks for over a decade. New York has two wins over Houston since the beginning of 2004.

The 2013-14 club really outdid themselves when it came to losing to Houston -- they didn't just lose, they lost with panache. They missed a golden opportunity to break the streak in November, when Melo hit a desperation three off the inbounds pass with seconds remaining, but the refs ruled it a non-shooting foul because apparently they are a bunch of jerks. And they blew an even shinier golden opportunity in January when J.R. Smith reenacted Andrea Bargnani's "Dumbest Shot in the World."

The two clubs will play this season on November 24 in Houston and January 8 at MSG. Will anything change in 2014-15? Lin is gone, but Houston continued trolling the Knicks by signing Trevor Ariza, probably just to remind fans of the godawful Steve Francis trade. The Rockets still have Howard, but the Knicks can once again counter with Bargnani -- heretofore known as the Dwight Slayer.

The plodding Italian proved surprisingly adept at guarding Howard in November, holding him to seven points on 1-of-5 shooting. This block was the greatest highlight of Bargs' season that didn't involve him getting ejected for taunting KG:

But the Knicks will never defeat Houston until they figure out a way to keep James Harden off the free throw line. New York's foul-happy defense has proven to be the perfect match for Harden's patented drive-n-flop technique. The amount of free throws the man has taken against New York over the past two years is simply staggering:

Now, the obvious answer here would be to get New York's defense to simply stop fouling...but we've watched these guys enough over the years to know that ain't happening any time soon. Knicks gonna foul. What they must learn to do is to foul with purpose, with zeal.

In short, the Knicks need to sign Charles Oakley to a 10-day contract solely to play against James Harden.

This goes well beyond strategy. This is about the pleasure of watching a 51-year-old man fouling a 25-year-old man simply for the sake of fouling. Put Bargnani on Dwight and have Oakley roaming the paint, ready to lay the smackdown. The "Bargs and Oak" frontcourt sounds marvelous, does it not? It could be a cheesy '80s cop drama or a particularly classy brand of malt liquor.

Would Bargs and Oak be enough to turn the tide against Houston? Of course not. But after 11 years of futility, the Knicks might as well have a little bit of fun with this so-called rivalry.