After signing a one-year contract with the Knicks earlier this season, Aldrich may finally have the opportunity to play serious minutes in the NBA.

Share All sharing options for: 2,015 Questions- #0388: How big of a role will Cole Aldrich play this season?

It's odd that Cole Aldrich is still searching for his place in the league. It wasn't that long ago that Aldrich was selected 11th overall in the 2010 NBA draft, and despite putting up solid per-36 numbers he's yet to seize the opportunity to advance beyond the end of a pro rotation. Perhaps this will be the year that Aldrich establishes his value in the eyes of NBA executives and fans.

How much responsibility can Aldrich shoulder this season for the Knicks? How much burn will he realistically be allowed with Amar'e Stoudemire and Andrea Bargnani both likely expecting significant minutes? The answers to these questions could mean the difference between a trip to the lottery and a flight to Chicago or Cleveland for the first round of the NBA playoffs. I mean, yeah, we're talking about a fringe NBA center who has yet to convince a coach that he deserves over 400 on-court minutes in a season. It's difficult to talk about Aldrich's potential with any confidence considering the small sample of game time we've seen. Still, considering Aldrich's play in those limited minutes and his physical attributes, he could end up being a very important part of the Knicks' core moving forward.

"...no one really expects him to develop into more than a lunch-pail type role-playing hustle guy."

That was DraftExpress' Jonathan Givony on Aldrich back in 2011. None of what little we've seen Aldrich do so far runs counter to that imagery. Aldrich has rebounded, blocked shots, spent fouls, and brought energy whenever he's taken the court. He'll turn 26 this fall and is probably nearing his ceiling in terms of potential, which makes him absolutely perfect for the Knicks both on- and off-court. A great speaker and intellectual once said, "Know your role, and shut your mouth," and Aldrich's understanding of his own limitations helps him to follow that sage guidance.

Cole Aldrich has taken 182 career shots in the paint/restricted area, per NBA.com's shotcharts. That amounts to just about 92% of his 198 total career field goal attempts. This is his shotchart from last season: 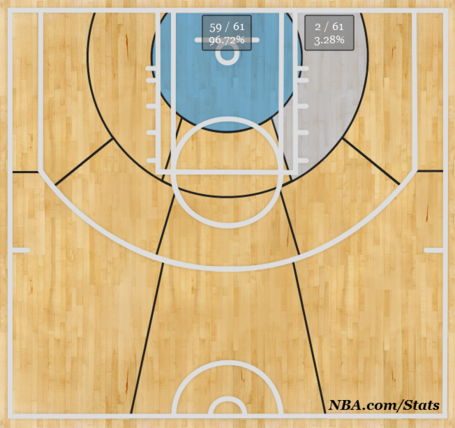 The man knows where he's effective. Of course, Aldrich's offensive game is secondary to his defensive utility, and that is where he can truly provide value for the Knicks. Aldrich stands at a sturdy 6'11" and boasts a tremendous 7'5" wingspan. He can probably block a shot or two. Aldrich ranked in the top-20 on Seth Partnow's statistic measuring rim protection (when ranked by S OPA/36). It's a fairly simple stat, but it reflects Aldrich's potential to help wall off the rim against attackers. You should absolutely check out Partnow's article for an explanation on what S OPA/36 even means, but essentially it's Aldrich compared to a replacement-level rim protector.

The Knicks weren't bad at protecting the rim last year (as Joe noted, the Knicks were too busy getting sniped from the 3-point arc), but Aldrich's emergence as an impact interior defender could help solidify a defensive identity for a Knicks team that has struggled on that end for most of the last decade. This would be optimistic considering he hasn't made teams much better defensively so far, but a player with Aldrich's sheer size and mobility provides a valuable safety net for a disciplined line-up. The Knicks would love to secure another piece to their Woodsonian puzzle.

Aldrich realistically won't be helping the Knicks to a title this year (...right?), but this opportunity benefits the team as well. The Knicks will have Cole's Early Bird rights, assuming he finishes this season in orange and blue, and thus will be able to go over the salary cap to sign Aldrich once they sign LeBron James to a max contract next summer. Or Marc Gasol. I forget exactly what the plan is, but I'm pretty sure it involves one of those guys. In any case, Aldrich means flexibility at reserve center next year. The Knicks will be able to sign him to a starting salary of up to roughly $5.9 million should the '14-'15 salary cap rise to projected levels. That should be more than enough to retain Aldrich, and that flexibility is especially welcome for a team suffering from a dearth of future draft picks.

To fully take advantage of the value Aldrich offers this season and beyond, we'll need to get a better handle on just how good he is. He'll need to continue to protect the rim against star athletes like Derrick Rose and LeBron James and he'll need to play meaningful minutes without giving up senseless fouls. The Knicks would benefit from Aldrich seeing at least 1,200 minutes to get an idea of what he can really do alongside established veterans like Carmelo Anthony and Jose Calderon. It may be difficult to find those minutes if Stoudemire, Bargnani, Dalembert, and Smith all look for a major spot in the rotation, but investing in Aldrich is in the Knicks' best interest.

The confidence New York shows in Aldrich now could provide significant value over the next three years. And should he fail to live up to expectations, the Knicks can simply turn in a different direction once his contract runs out after this season. As the team once again looks to build a championship contender around Melo, it would behoove the front office to secure important members of the team as soon as possible, or at least identify their areas of greatest need. Aldrich likely won't develop into more than a role player, and that's fine. He still holds potential value as an affordable defensive specialist for a team in need of a few. The Knicks would do well to explore that.