Marv Albert is the greatest sports broadcaster in the history of sports broadcasting. There is no other. Upon his announcement of his retirement, he must be honored. I'd like to share a story with you.

He wrote this story around 1997 or so. Per my notes, it was published on NBA.com, but 1997 NBA.com ain't even on the Wayback Machine. We're talking old-school, rec.sports.basketball.pro. Fortunately I have a signed copy. This exists nowhere else on the Interwebs, and I humbly bequeath it to you.

I met Marv and Fratello (who, like me, orders off the kid's menu) after a game in 2007. Pulled out my Sharpie. They both reacted like perfect gentlemen, a combination of "oh, yeah, I kinda remember this" and "what's wrong with you?" Since then, it's hung on a frame on my wall.

I'm gonna miss him, but I hope to hear him call another Knicks game, or perhaps a dozen, before he sails into a happy retirement, one that he deserves.

Here's to you, Marv!

WHEN I WAS A KID GOING TO BALL GAMES and arenas I would take along tuna fish or bologna sandwiches. On white bread. Silvercup. I loved Silvercup. Bologna in Silvercup was so good I didn't have to put mustard on it. You could see I had the early makings of a gourmet.

They don't serve tuna fish or bologna sandwiches at most stadiums. And whatever happened to Silvercup? But all in all things are getting much better in the food department at sports events.

I have been asked by the wise people who put out this publication to list my favorite arenas for food. I am happy to enlighten readers on such an important subject, but first I think you have to know a little more about my eating so that you can know what a reliable source I am.

I was your typical American kid growing up. I hated vegetables. My mother's specialty was steak and potatoes and they were very good indeed. The trouble is that she also added another vegetable to the plate (it was a shock to me when I learned as a grown-up that potatoes were a vegetable). I wouldn't eat vegetables no matter her coaxing. I had an ally in this because my father, Max, didn't like vegetables either.

I should add right now for the mothers and fathers out there who are fighting the good fight to ply vegetables on their offspring that I now like vegetables. Love them. Yummy.

As a kid I loved going to the Automat. You remember the cafeteria chain that had many of the food items in the little windows. You would put a coin in the slot next to the window with the desired item, a latch would sprint, and the window would open.

I miss those Automats. I sometimes think it would be a good idea to use the Automat concept in arenas. Fans could get their food from windows instead of waiting to be served. But then again, given the imagination and dexterity of so much of sports fandom I suspect it wouldn't be long before some sharpies figures out how to get the food without putting in any money. Or they would quickly manage to open those little windows.

I should say that my careful food research doesn't include private clubs or press rooms, luxury box food or other elitist stuff. This is food any ordinary Joe or Jane can buy at the concession stands As a matter of fact I think it's pretty lame when a writer of broadcaster complains in the media about poor food in the press area of an arena. Who cares when writers and broadcaster don't like press room food?

No. 2 on my foodfest is the Spectrum in Philadelphia. Very diverse choices. Their cheese-steak sandwiches are so good I once considered applying for the 76ers play-by-play job.

No. 3 is the old Comiskey Park in Chicago. I haven't been in the new park so I can't testify to its worthiness, but I still think fondly of old Comiskey's League of Nations menu. If the new park doesn't measure up, it's another example of the new adage: change isn't always progress.

No. 4 is the Montreal Forum. This is ranked purely for its coffee, the strongest in sports.

Coffee, I must confess, is important to me. I have changed my habit from being a junk food eater to eating more healthy food. But I have always been and will always be a coffee lover. Nothing too much. Three or four cups a day and I want it to be good and strong.

When I was working this season's NBA Finals in Orlando and Houston for NBC, we had a runner going out to the Starbucks chain to bring in coffee. Sometimes when I was working with Mike Fratello he would go out for coffee; for the Czar it was one of his main duties. And we always turned down his passionate request for tips.

No. 5 is the USAir Arena in Landover, Maryland. Very good sandwiches, plus, for Fratello, they have a children's menu.

Madison Square Garden rates just below the top Five, and I may be leaning over backward not to be called a homer.

Because food always puts me in a good mood, I'll add my list of the best spots for hot dogs:

No. 1 is the Tiger Stadium in Detroit. They know how to get them good and charred, the way I like them.

No. 2 is the Montreal Forum.

No. 3 is Boston Garden. I'll regret its passing. I'll miss the gruff vendors and the insults from the fans. I like to be insulted when I get my hot dog; I'm from New York.

No. 4 is Milwaukee's County Stadium. I do this out of respect for Bob Costas, who says the bratwurst there is the best in the country. Is it fair to throw in bratwurst with hot dogs? Write to Costas if you object.

No. 5 is Chicago Stadium again, posthumously.

Madison Square Garden again rates just behind the Top Five. No homer, I.

You might ask what I would propose as the perfect arena for good food. And I might answer that I am glad you asked.

Obviously you would have to start with the basics: good hot dogs and hamburgers. There was a time when I was doing the radio pregame show for the Yankees that there was talk about bringing in the Nathan's of old as the caterer for Yankee Stadium. The idea never materialized; a pity.

Good hot dogs and french fries like Nathan's would be a start. Hot dogs with sauerkraut if you want it. People are more health conscious now so we would want to cut down on the grease. We would want to have things like grilled chicken and salads.

Arenas have never been good with a variety of soda flavors. I would put in Dr. Brown's flavors with the Marv Albert specialty - Dr. Brown's Cel Ray Tonic. Yum. It might be time consuming to make eggcreams and malteds in an arena, but in a perfect world we would do it.

I would also bring in Mrs. Stahl's knishes from Brighton Beach. And our coffee would be the best. We would spare no expense to serve the best, strongest coffee.

Because I am more health conscious now, I don't get around as often as I used to. So I have to rely on scouts more than ever before. John Andariese is a top scout. He has little control over his eating habits. He'll nosh before and during the game, then have his fourth and fifth meals afterward. 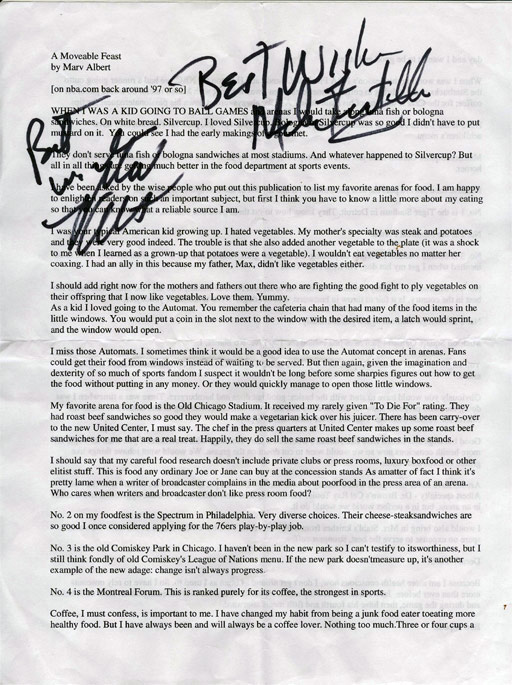